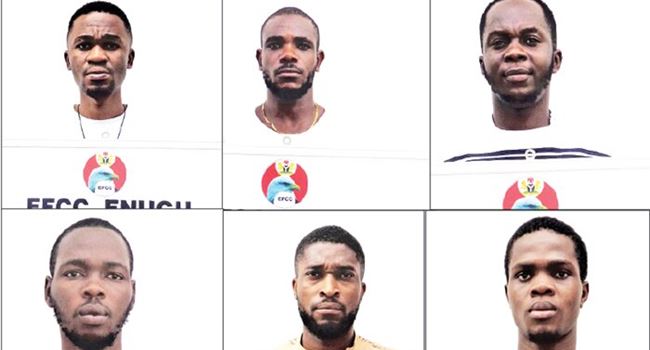 Twelve students arrested for Internet fraud have been sentenced to two years’ imprisonment each by the Federal High Court sitting in Enugu.

They were arraigned before Justice I.M. Buba on charges bordering on forgery, impersonation and obtaining money from unsuspecting foreign nationals under false pretences.

The statement said the students, after the charges were read to them, pleaded guilty.

The charge against one of the defendants read, “That you, Mbanugo Ifeanyi, on or about March 10, 2021, within the jurisdiction of this honourable court, fraudulently impersonated Ornale Sylvestermanda and Venita through a fake Telegram account, with the intent to obtain money from unsuspecting foreign nationals, thereby committing an offence contrary to Section 22(3) (a)(b) of the Cybercrimes Prohibition, Prevention, Etc) Act, 2015 and punishable under Section 22 (4) of the same Act.”

Justice Buba convicted and sentenced them to two years’ imprisonment each with an option of N1m fine each.