Home Columnist Governor Ortom and his cross – By Yakubu Mohammed 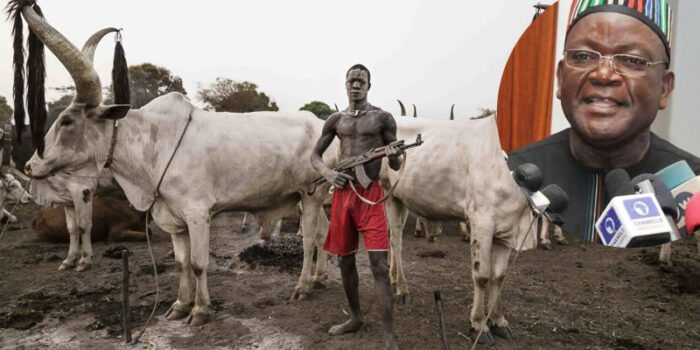 On April 18, 2018 I wrote a column in this paper on Governor Ortom’s little Davids. The piece in question was provoked by the governor’s deep-rooted belief in the spiritual efficacy of the Biblical stone of David, which dealt a deadly blow to Goliath and his invading army.

With his back to the wall, and finding no reasonable, constructive and simultaneously efficacious alternative means for dealing with the lingering crisis in his state between cattle herdsmen armed to the teeth with AK47 and the ordinary farmers in the state armed with nothing but their hoes and cutlasses, Governor Ortom had told the multitudes of displaced persons in the IDPs to disband and return home to their farms.

If they were attacked again, as it had become their lot, he admonished them to use any available weapons including stone to defend themselves. I was convinced that this desperate but utterly beleaguered governor must have drawn some inspiration from the Biblical story of David who dealt a deadly blow to Goliath armed with nothing more lethal than stone.

But it is not a measure of the general lack of faith in Ortom’s spiritual prescription that the lingering crisis in his state had recently assumed a more alarming dimension.

Since 2018, the attacks have spread throughout the North with abduction of children in schools, with farmers chased out of their farms and poor innocent citizens being waylaid on the roads and kidnapped for ransom or the women raped in the presence of their husbands and their children. It has gone beyond Ortom’s Benue State and the use of stones. Unfortunately, the Federal Government and the vocal Northern elders seem always to be looking elsewhere but the North for the cause of this calamity.

Only last week, Saturday, the governor, who has not officially declared his intention to challenge Eliud Kipchoge of Kenya as the holder of world record in marathon race, ran for more than one kilometer to escape a possible assassination by 15 gun-trotting herdsmen, all clad in black, who had invaded his farm.

As the police and other security agents have vowed to get to the bottom of this alarming episode, which, truth be told, borders on treasonable act, it may be germane to read an excerpt of the piece in question not to dismiss his resort to fatalism but to remind the country at large of his utter helplessness and those of his fellow governors who, on paper, are the chief security officers of their respective states. Please read on:

Poor Samuel Ortom. Still there is no respite for this beleaguered governor of the embattled Benue State.

Sitting perilously in the eye of the storm, or much worse, on the horns of a dilemma since the herdsmen – local or the ruthless invaders from the Sahel region, have not let up in their murderous exploits in his state, Dr. Samuel Ortom, has been running, as the cliché would have it, from pillar to post, all in search of an elusive peace.

The news from Benue remains predictably consistent and horrifying – the herdsmen, according to media reports, have not stopped killing defenceless people in their various communities. The police have not stopped patrolling but its presence has not done much to stop the bloodletting that follows the intermittent foray into the rural communities by these audacious gunmen.

The army, drafted there to show its might and enforce deterrence, has ended its exercise in the state. When the soldiers were around they instilled some confidence in the people and gave them a sense of enhanced security but it is not known how much fear they instilled in the herdsmen. That they have continued their attack with impunity shows how much regard they have for constituted authorities. This audacity has left the governor utterly confused and bewildered. He is simply at his wits end.

Things got worse for Governor Ortom last week when his paramount ruler the Tor Tiv, Professor James Ayatse and some other prominent citizens of the state berated him for advising internally displaced persons in the IDP camps to go back home and defend their homes and hamlets with stones if they are not allowed to carry arms.

Like the Palestinians who habitually demonstrate their moral indignation in the face of fire power from the Israelis by throwing stone at the army of occupation, Ortom, I guess, might have resorted to the throwing of stone as an act of desperation, knowing fully well that stones or even dane guns cannot withstand the fire power of AK47 and other such lethal arsenals in the armoury of these unrelenting intruders.

I am even tempted to dismiss this stone throwing as a metaphor of what the underdogs can do to defend themselves in the face of unconscionable acts of persecution. When Ortom gave the advice to his people, he referred them to the Biblical story of the underdog called David who dealt with a monstrous warrior called Goliath.

I quickly recalled my early school days and the compulsory scripture lesson we took in a Catholic school. I recall the Biblical version of the story of David who has become an immortal celebrity – an all-conquering little fighter in the army of King Saul. David, so the legend had it, had come to visit his three elder brothers in the army just to deliver bread to them. While there, he heard the story of the mighty Goliath of legendary invincibility. The under aged David volunteered to enrol in the army. His wish granted, he prayed and picked some pebbles into his bag and made to confront the nemesis of the Israeli army.

Face to face with Goliath who, according to the custom of the time, had come to taunt the Israeli soldiers, David brought out his sling and after murmuring some prayers, dealt a deadly blow at Goliath.

This legend is shared in the Islamic history. David or Dawood became king of the children of Israel and he settled in Jerusalem. I can understand why, the Palestinian youths, lacking appropriate armaments, resort to raw courage and desert Arab braggadocio, armed with nothing better than catapult and stones to defend themselves when the modern day Israeli army of occupation engage in grim confrontation with the Palestinians in Gaza. But I cannot, in the same breath, understand why Ortom would advise his unarmed youths to throw themselves in the line of fire, armed with nothing but stone.

I am even more scandalised by the reaction of his people, especially the intellectually endowed Tor Tiv, a professor whose last port of call in the academia was as vice-chancellor of a Federal university. Without any doubt, bad times like this have an uncanny capacity to drain from us the sense of humour that one must possess in abundance to face life’s cruel joke, the type Nigerians are confronted with daily either from Boko Haram or the cattle herdsmen or the dare-devil kidnappers among others.

The Tor Tiv should have taken Ortom’s stone throwing advice as the act of a desperate man or as a metaphor to drum home the sufferings of his people. The Tivs that I know don’t possess the spiritual prowess of the ordained little David in the Bible who had been sent by God to save his people from the hands of the Philistine war-monger and terror. Modern day Goliaths at the totem pole of their vain gloriousness don’t even give a damn about the platitudes of the weak – exhortations to be their brother’s keeper, to respect other people’s rights and freedom to life and property. The only language they speak is the brutish language of impunity and a crude sense of entitlement. Until one day, when in the local parlance, monkey goes to the market and does not return.

That day has come. This is not Ortom’s war against bandits and armed herdsmen and other criminals. It is an unmistakable invasion of Nigeria; therefore, it is a war against all Nigerians. President Muhammadu Buhari has taken the right step by declaring that the Federal Government cannot and would not enter any dialogue with criminal elements. What his declaration means is that Nigeria under his watch must prepare to return fire for fire, not minding whose horse is gored.