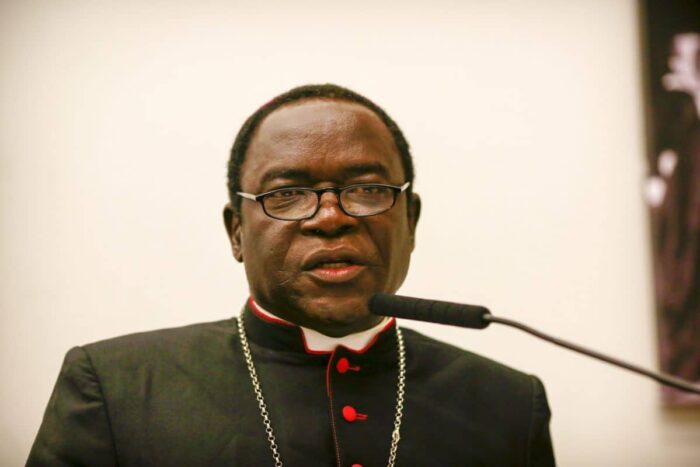 Democracy, when it is not deformed, is a running conversation between the people and their government. In a government of the people, the voices of the people must be heard, the impact of policies on them appraised, their participation in governance matters, becomes the centerpiece of the democratic assumption. It is for this reason, therefore, that the current, partly orchestrated controversy over frank and biting comments made by the Catholic Bishop of Sokoto Diocese, Rev. Father Matthew Hassan Kukah, on the state of the nation must be viewed as not only deeply regrettable, but also a sure sign that all is not well with our democracy. Reluctant to divest itself of its military moorings, government and the elite continue to speak and talk as if Nigeria is still under a not-so-benevolent dictatorship.

The latest manifestation of the shocking intolerance of opposing views that has attended Kukah’s address is the “apologise or quit” notice given, a few days ago, by the Sokoto-based Muslim Solidarity Forum, which accused Kukah of disrespecting Muslims. In the heat of the debate, what was supposed to be a chiding of the group’s bullying tactics by government through its information officials was employed to castigate Kukah. As the statement by Garba Shehu, Senior Special Assistant to the President on Media and Publicity, quoted in the opening paragraph, shows, a covert understated justification was provided for the persecution of Kukah by government. It affirms, for example, that Kukah has earned the displeasure of many citizens, allegedly because he criticised the regime as well as the President, Major General Muhammadu Buhari (retd.). If you go back to the beginning of the debate, you will encounter remarks by the Minister for Information, Lai Mohammed, rebuking Kukah, accusing him of calling for “a violent overthrow of a democratically elected government”, as well as for preaching religious disharmony. Mohammed’s preferred reading of the text of Kukah’s speech provided a cue and a window for several groups to attack Kukah, with some even calling for his arrest. That reading stretches the text a bit awkwardly, in order to harvest particular slants which made it easy for Kukah to be accused of inciting a coup. This is not a defence of Kukah, but a proposition on behalf of free expression with the corollary that once government shows irritation or antipathy towards critical remarks, several groups some of them currying favour from it latch on to it by calling for the head of the critic.

That is another way of saying that once the dice is loaded by government’s spokespersons, a signal is furnished for state-sponsored civil society groups to, as it were, roast the critic. This point of view is buttressed by the mushrooming of several associations, whose sole objective is to lambast, scorn or confront civil society groups. To an extent, this is part of the stuff of politics, famously defined as the aggregation of diverse interests. That said, is it not a bit distressing that a regime which rode to power with an agenda to save the country, and with Messianic triumphalism is now reduced to sponsoring or at least inviting pro-government groups to do battles, physical and intellectual, with its critics?

Needless to say that this was the accustomed practice under the military, but a democratic government should be liberal enough to benefit from the spontaneous expression of viewpoints including critical ones. In this columnist’s opinion, most of what Kukah said had been aired before across the Nigerian civil society, some of them by respected dignitaries such as the Sultan of Sokoto, Muhammadu Sa’ad Abubakar, who has been relentless in putting the regime and Buhari on the spot because of rising insecurity in Northern Nigeria. This is as it should be. For, would it have been better if everyone kept quiet, or chant glory to Buhari while the country is being overrun by bandits and tell tale signs of woe appear like deeply etched marks on the face of everyone? In other words, criticism, when things are going wrong with no sign of early improvement is both a duty and a responsibility of informed citizens.

Nobel laureate, Prof Wole Soyinka’s apt aphorism to the effect that the man disappears in him who keeps mum in the face of tyranny and for that matter, misrule comes to mind here. Today, the Americans challenged by presidential lawlessness are reaping the fruit of strong institutions which continue to hold President Donald Trump at bay, and to demand accountability. Nigeria has no such luck for our institutions, as everyone knows, are weak, over-politicised and unable to properly countervail autocracy. Nonetheless Nigeria, in partial compensation, has a magnificent civil society which over time has reduced the possible impact of governmental underperformance and lurches into authoritarian habits.

So, rather than see critics as adversaries who must be tamed or dealt with, it is better to draw from their insights considering that many of those in government today were at one time or the other in the trenches for the redemption of our political community. True, some of Kukah’s points of view could have been expressed in a less shrill tenor but consider that in political terms, he is serially disadvantaged because he comes from a minority group in Kaduna State, and is a Christian in a context where religion and power are invariably manipulated.

Also, he is an intellectual in a nation where moneybags call the shots. Therefore, just like a black American scholar is not likely to talk about racism with the same equanimity as an established white scholar in the United States, it is not expected that Kukah, at the receiving end, will speak with the accents of those in power  who see little wrong about current arrangements. More importantly, he represents, I argue, the finest breed of civil society activists who find it strange or unusual not to stir the nation’s conscience when matters are going awry.

In the anxious and hasty conversation which attended Kukah’s intervention, there have been several distortions with some, for example, contending that the cleric is wrong or widely exaggerating in describing Nigeria as a failed state. The truth of the matter, however, is that what the cleric said is that “the prospects of a failed state stare us in the face”. Obviously, this is more like a solemn warning of the dangers of state failure rather than an assertion of an actual doomsday. It is perhaps even more regrettable that more heat than light has been generated, in that the essence of the sermon has been terribly downplayed while its echoes or political overtones had been overdramatised. A country does not learn from its critics or mistakes, if it wilfully throws away the baby of germane concerns away with the bath water of secondary matters. Even if we dislike or resent critics, we must not shy away from taking important lessons that they teach to heart.