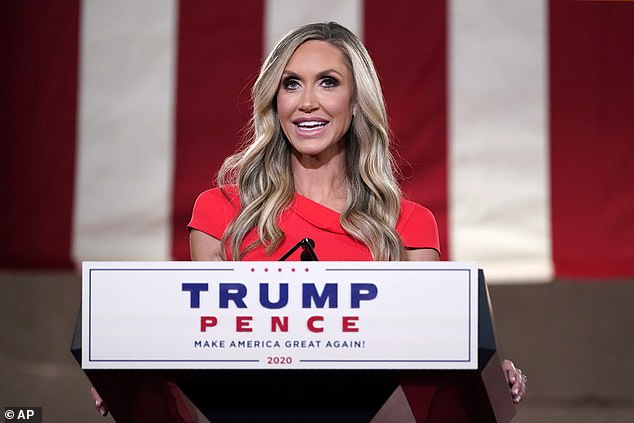 Lara Trump, the first daughter-in-law, played up President Donald Trump’s propensity to hire women for leadership roles and the family’s down-to-earth style in her Wednesday night address before the Republican National Convention.

Trump played up her North Carolina, public school roots, her amibition to make it in New York City and then her meeting of Eric Trump, the president’s middle son and her husband of nearly six years.

‘Any preconceived notion I had of this family disappeared immediately,’ she said. ‘They were warm and caring, they were hard workers, and they were down to earth. They reminded me of my own family – they made me feel like I was home.’

Lara explained that ‘gender didn’t matter,’ which she realized when then-candidate Donald Trump asked for her help winning her home state of North Caroline, a key swing state, when he was running for president in 2016.

‘Though I had no political experience, he believed in me and supported me – he knew I was capable even if I didn’t,’ she said.

Cut-to when President Trump was elected and then took office in 2017.

‘It didn’t surprise me when President Donald Trump appointed the most women to senior level positions of any administration in history,’ Lara Trump said.  ‘The Secretary of the United Nations, Secretary of the Air Force, the first female CIA Director, the first African American female director of the Fish and Wildlife service and countless ambassadors, just to name a few.’

‘He didn’t do these things to gain a vote or to check a box – he did them because they are the right things to do,’ Lara Trump added.

As an adviser to the Trump campaign, Lara Trump threw in some red meat too.

‘In recent months, we have seen weak, spineless politicians cede control of our great American cities to violent mobs,’ she said. ‘Defund the police is the rallying cry for the new, radical Democrat Party.’

‘Joe Biden will not do what it takes to maintain order. To keep our children safe in our neighborhoods and in their schools. To restore our American way of life,’ she added.