Home Columnist FFK: Man on a ‘short-fuse’ – By Olatunji Ololade 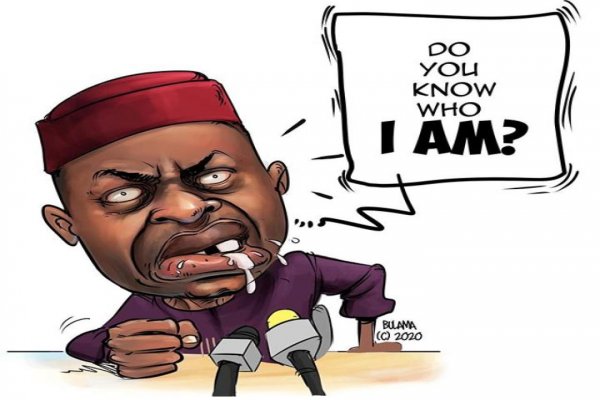 First meet with wisdom is like retaking first breath but the irate clod throttles sense in the womb. Picture him as a politician, proficient in the brazen art of deception. Picture him as a flunkey; he matures in tedium, spinning tiresome yarns to dull gullible minds or the Nigerian psyche if you like.

If a journalist, picture him as a ‘wailing wailer,’ ‘an errand boy,’ or other shades of vermin as defined by State House courtiers or journalists turned ‘political errand boys.’ Or you could simply call him ‘STUPID!’ like Femi Fani-Kayode (FFK) did, recently.

Yeah, this is about former aviation minister, Fani-Kayode, and his verbal assault of Daily Trust correspondent in Cross River State, Eyo Charles. Charles had asked him, during a round-table with journalists in Calabar, asked Fani-Kayode to reveal who was sponsoring his trips from one state to another “to supervise projects.”

The question seemed logical to Eyo; Fani-Kayode is not holding any public office but he had of recently embarked on “official visits” to states to assess the performance of governors.

Eyo apparently flouted the rules of engagement in political intercourse; he came to Fani-Kayode’s table without ‘table manners,’ and failed to fulfill ‘the journalist as sycophant stereotype.’ That was sacrilegious to Fani-Kayode. He would appreciate it perhaps if Eyo had conducted himself like a fawning page, the smooth flatterer or intellectual thug, twisting and turning with promising circumstances.

Of course, Fani-Kayode lambasted him. A video uploaded on the former aviation minister’s Twitter handle shows the journalist’s shellacking by Fani-Kayode who responds: “What type of stupid question is that? Bankrolling who? Do you know who you are talking to? Who can give me money for anything? Who do you think you are talking to?”

Sadly, at this point, Eyo tendered an apology to Fani-Kayode. He could have walked out of the conference room. He could have given it back to his assaulter equally hard. And he shouldn’t have risen from his seat to ask his question. Perhaps he was afraid or he simply took the moral high ground by embracing the finer aspects of character and tact.

Nonetheless, Fani-Kayode persisted, with his assault, stressing: “I could see from your face, before you got here, how stupid you are. Who do you think you are talking to? You have a small mind. Very small mind. Don’t judge me by your own standards. I have been in politics since 1990. I have been taken, I have been locked up how many times by this government? Suffered! I have been persecuted.

“Unlike most of the politicians you follow for brown envelope. Don’t ever judge me by that standard! I spend, I don’t take! And I am not a poor man…Bankroll who? A former minister? A lawyer? Don’t ever try that with me again o. Please! See me well! (Glares at Eyo for effect) Don’t ever! I have a short fuse. I will hit you hard…Somebody has been on the road for how long, and you come to ask that. Very stupid!”

Going by Fani-Kayode’s tirade, he has neither the patience nor tact to conduct himself as a public figure. His face a mask of rage, his tenor contemptuous, he railed, “I will hit you hard!” And he hit Eyo Charles really hard.

After the incident, Fani-Kayode published via his twitter handle: “During my tour of the South and after a long and successful press conference in Calabar, Cross Rivers state, a journalist put up his hand for the last question and said, ‘Well, we do not know who is bankrolling you.’ This is not a question but an assertion and an insult.

“And if this insulting ASSERTION were made before Trump or OBJ, I know how they would have reacted. Above is my response (the published video) & I have no apology to offer for it…”

Daily Trust has issued a strong condemnation of Fani-Kayode’s demeanour and despite claiming that he had “no apology to offer,” Fani-Kayode has apologised for referring to the journalist as “stupid.”

There are the oft-repeated logic and inclination to blame the saddening episode on the journalist’s lack of respect for a former minister. The journalist’s apologists, however, argue that he was simply doing his job.

This writer berates Fani-Kayode for his lack of decorum. His impulse to rage makes him susceptible to spurious labelling, and his conduct, subject to cold-eyed denunciation. His frantic allusion to status is a symptom of his complexes and innate frustration; a reflection of contemporary society’s descent the slope of the effete and grotesque.

Max Weber, the late German economist, and social historian, would say it has been common to all sorts and conditions of men at all times and in all cultures of the earth, but I would say that the Nigerian malaise is brought about by the absence of an enduring moral code.

This deficit manifests in deficiencies of leadership and societal ethics – the consequence of which is the regeneration of tyrants, narcissists, and dealers of all nature, across the country’s landscape and corridors of power.

The Fani-Kayode vs Eyo episode also highlights problems of repute bedevilling contemporary media. Fani-Kayode labelled Eyo a brown envelope journalist – and this is actionable. His demeanour is representative of a behavioural trend among the political class in their relations with journalists.

At the backdrop of widespread commercial failure, the random newspaper, television station, and online medium, become vessels to the louche, and itinerant grim reapers as you read. Editors and reporters of powerful news platforms have become death’s minstrels. Like Ogege, the spirit of embroidered woe, they have turned serpents, sleeping in Nigeria’s undergrowth to merge with the hue of the prevailing wild.

They forget that when Nigeria eventually submerges in the mire of bestial elements, even the press will be cannibalised. And the press is being cannibalised. As you read, more media houses are laying off staff or converting employees to stringers, in the wake of harsh economies imposed by the COVID-19 pandemic.

Nonetheless, some local media, like global news agencies, serve as emissaries and enablers of the dark, vicious lusts of politicians, industry titans, and multinationals. How? By couching the latter’s monstrosities in beautiful English.

We are at push’s mutation to ‘shove;’ who’s fooling who? Better tell it as it is than fade with journalism’s dying light. Yet this minute, some elements are rationalising Fani-Kayode’s vicious tirade.

As he stood up to leave, the journalists rose in deference to him. I would call this good breeding. All hope is not lost. Nigerian journalism, for all its quirks and shortcomings, is endowed with cultured men and women. True ethical natives who understand that honour must be accorded, a political-has-been; an ireful minister even while his frantic nature incites wrath.

Fani-Kayode may forget. But Nigeria would never forget when the self-confessed former minister with a “short fuse” got short-circuited by Charles Eyo’s harmless question?

Article culled from The Nation