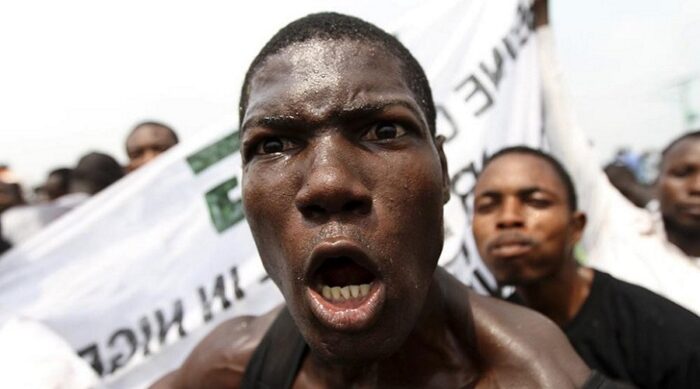 We belabour the ‘Nigerian dream.’ We abuse the idea that life will get better, that progress is assured if we keep faith, obey the rules and work hard, that prosperity is guaranteed if we continue to tread the slow, steady path to progress and a prosperous future.

And in pursuit of these lofty ideals, we pervert the steady, measured course of the universe; hacking pliant paths to our dreams at the crossroads where gluttony fosters depravity and vice.

Eventually, we awaken to a cold, bitter truth: We are being sacrificed. The Nigerian dream we were sold is not worth our sacrifice. And the individual dreams we pursue, aren’t worth a smidgen of what we imagine them to be.

By the time we all struggle to achieve our dreams; Nigeria will be finished. The swollen belly of our pride shall become visible to us, and it will dawn on us, that, all along, we had been blindly acting a script prepared by career predators from Western nations of Europe, America and our ruling class.

The truth will become clearer to us and we shall realise that we have been sacrificed. We may all be sacrificed; some of us much quicker than others.

But until then, we shall squander the present on the altar of bigotry and greed. The decline of Nigeria is a story of gross injustices by the ruling class to the citizenry. But that is only an aspect of it, the greatest injustice is that meted out by individual citizen to self – the youth particularly.

Today, we suffer devastation by Boko Haram, corruption in government circuits, declining standards of living, stagnant and falling wages that are hardly paid at the due time; we suffer curtailment and absolute denial of our basic wages, long-term unemployment, slave labour, escalating crime wave, among other ills.

Together, we perpetuate gruesome realities of the weakest being crushed decisively and maniacally by the affluent and strong. An unbridled sectarian, ethnic, and corporate power has taken our government hostage while overseeing the dismantling of our cultural heritage, societal, and entrepreneurial values.

But the youth, are responsible for even worse atrocities as they are the tools by which the ruling class and cohorts overseas plunder and destroy Nigeria. The virus of political corruption, the perverted belief that only political and material profit matters, has spread to distort our thoughts and understanding of right and wrong. Today, it manifests in endemic proportions plaguing our communities with religious and political terrorism, economic and cyber-terrorism to mention a few.

At the root of all these subsists an inordinate hankering for money. Theatrical mutation, excessive self-love, and materialism, seductive principles of modern youth, can never be reconciled with growth and morality. Contemporary performances of the youth in social and political theatres emphasise Nigeria’s descent from a moral cloud into dissolute fenland.

Freedom of persona is magical but often destabilising. If married to an excessive lust for money, it becomes very frightening and overwhelming. Ultimately it destroys.

A spectre haunts Nigeria’s youths. Having entered an unholy alliance with their oppressors, the youths do not constitute formidable opposition to scare corrupt leadership aright. Negative, emasculated passivity flourishes when the youth subordinate themselves, unquestioningly, to the ruling class.

Playing passive requires extreme sacrifice; the docile youth, in fulfilling his role as gelded, amoral being, must silence his mind.

His predicament worsens by the government’s willful perversion of pedagogy. Where education festers as an affliction, scholarship and enlightenment become empty phrases, foisting on Nigeria, an illiterate, passive youth.

The government equally does its part in keeping the youth docile and deployable towards selfish ends. How? By destroying Nigeria’s educational foundation as well as the possibility of its rebirth.

An educated mind is a questioning mind, which conflicts with the whims of Nigeria’s oppressors. Public officers, irrespective of party affiliation, would rather see the citizenry stew in ignorance than enjoy quality education and attain true enlightenment.

Aspects of government policies and spending render the average youth poorly educated. This year’s education allocation, like previous years’ may not enjoy a rare boost beyond seven per cent of the national budget. Not with the COVID-19 crisis.

President Muhammadu Buhari allocated a paltry 6.7% of his initial N10.33 trillion national budget to the education sector, lower than the 20 percent recommended by UNESCO as education budget for developing countries.

Nigeria deserves, at least, an 18 per cent allocation to the education sector. This, President Buhari must acknowledge in future allocations to the sector. He should make the best use of his second term, and scorn the ‘highly informed, expert opinions’ that counsel an ‘expedient’ and ‘radical’ recourse to the policies foisted on us when ‘structural adjustment’ forced Nigeria to reduce spending on education, health, and infrastructure, among others.
The bankruptcy of Nigeria’s economic and political systems are attributable to her comatose education sector, and an elite given free rein to organise education and society around “predetermined answers to predetermined questions.”

The current system has been effectively rigged to produce what many corporate hierarchies persistently cite as “unemployable graduates.” The few “employable” ones are mostly scions of Nigeria’s leadership, and they are recruited from Ivy League and mushroom universities abroad, where they have been schooled only to fulfil responsibilities and find solutions that will preserve the status quo.

They are incapable of asking the broad, universal questions – staples of a deeply grounded, socially conscious educational process. Both “employable” and “unemployable” graduates were never equipped to challenge the superficial and deepest assumptions of Nigeria’s decadent economic and political culture.

They can neither discern nor convincingly evaluate, superficial aspects of popular culture vis-a-vis the harsh realities of political and economic mismanagement.

They are ignorant because they had never been taught to condemn and scorn human nature’s propensity for moral greyness when confronted with a choice between good and evil.

Lacking a contemplative spirit, they do not understand why Socrates identified all virtues as forms of knowledge and why such knowledge may foster privileged civilisation.

To train someone to manage an account for Goldman Sachs or PriceWater HouseCoopers, argues Hedges, “is to educate him or her in skill. To train them to debate experiential, systemic, and humanist ways of grappling with reality, however, is to educate them in values and morals.”

Indeed, a culture that mistakes management techniques for wisdom, and fails to understand that the true measure of a civilisation is its compassion, not its speed at conquest and consumption, spiritedly condemns itself to death.

In true Hedges-speak, humaneness is the product of the enlightenment, a comprehensive, adequately funded, and supervised educational process, but Nigeria’s leadership is ignorant of such civilisation. It is a product of society’s moral void.

Blinded by greed and bigotries, they neglect the gaping inadequacies of the country’s educational policies and spending, to service enduring, institutionalised corruption, like outrageous executive, legislative and judicial salaries.

Buhari could yet midwife a constructive civilisation by treading the path less taken. An 18 per cent budgetary allocation, or thereabouts, to the education sector, followed by eagle-eyed monitoring of “projects,” could trigger Nigeria’s renascence.