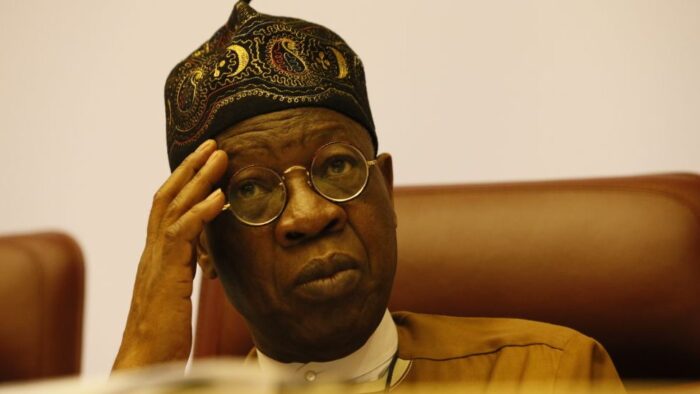 On August 7, Minister of Information and Culture, Lai Mohammed, appeared on a live TV show where he announced the hike in the N500,000 fine for “hate speech” in the amended National Broadcasting Commission Code by 450 per cent. According to Mohammed, the increase was to stem the flagrant violation of the code because the fine was “very easy to pay.” Faced with the dilemma of people violating a code that already comes with a hefty fine, the solution should not be more fines. They should question if the problem at hand is even resolvable by such punishment. How much is a radio station licence that a mere fine should strangle the business?

When Mohammed blamed “hate speech” for the genocides in Rwanda, Bosnia, and Cambodia, you realised that his knowledge of history lacked nuance. Like several officials of the present regime who incessantly wail against “hate speech,” Lai fails to demonstrate an enlightened idea of the concept and its operations. Is hate speech what truly causes violence in Nigeria, or the killings are the serial fallout of the government’s mounting piles of gross ineptitude? Which of the series of violence taking place in Nigeria have they traced to hate speech that they keep deploying state power at all levels to quell it? If they are not using the National Assembly to make laws to curb hate speech, they are imposing stringent fines. In a country where the minimum wage is less than N30,000 and many people are barely surviving, who even came up with the idea of a N5m fine?

Why has the Nigerian government treated “hate speech” like a plague on the country but was self-muted when a Kano Sharia court sentenced someone to death over a frivolous charge of blasphemy? Suppose their obsession with hate speech is genuinely about regulating the social atmosphere to prevent violent outbreaks, why did they not say something when some demagogues ascribed to themselves the power to override the constitution by sentencing someone to death? Why is one form of utterance deemed bad for the country’s health, but the other that pronounces a death sentence on someone merely exercising the right to free speech was met with cowardly silence? When a lawyer wrote to the police threatening public violence if an atheist, Mubarak Bala, was not punished for his free exercise of conscience, where was Lai Mohammed to remind them such actions were tantamount to hate? Maybe, they should first define the parameters of damaging speech for us because at the rate we are going, the only acceptable public speech will be “Sai Baba!”

Just days after Mohammed announced that hate speech now costs N5m, the NBC fined a radio station, Nigeria Info, for airing an interview with a former Deputy Governor of the Central Bank of Nigeria, Dr. Obadiah Mailafia. Among other unsubstantiated assertions, Mailafia had claimed that an unidentified northern governor was a Boko Haram commander. The speed at which the NBC applied the fine and which the Department of State Services pounced on him makes one wonder why such efficiency has not been running the country.

Much has already been said about Mailafia’s goof, but in all honesty, what exactly was new? Blaming the government and a shadowy elite for our national dysfunction is a national pastime. Under Goodluck Jonathan, a portion of the country spent valuable time blaming the Boko Haram attacks on the northern cabal that vowed to make the country “ungovernable” for him. Another portion of the country was convinced it was a government conspiracy. They took their anti-government campaign to Washington to allege that the failure to arrest the situation was a systematic plot to decimate northern Nigeria. So, what is new about Mailafia’s claims that could not have been put down through a well-reasoned counter? Why else would they have used repressive force other than to intimidate media houses and make them cower before their imperial majesties?

Since hate speech is so loosely defined, perhaps they should extend their power of reprimand to the Kaduna State governor, Nasir El-Rufai, over his comments on the Southern Kaduna crisis. From his utterances, it seems he has completely lost the will to be seen as a neutral adjudicator and might even have become a threat to the public quest for peace. In a recent TV interview, El-Rufai said of southern Kaduna leaders: “Anyone that is moderate, anyone that is promoting peaceful co-existence between various ethnic groups is considered a sellout. And a governor like me, who does not appease them because they are used to being appeased, they cause troubles, they organise these killings and then, their leaders are invited by the governor, they wine and dine and they are given brown envelopes. That’s what they have been doing for 20 years.”

In one fell swoop, El-Rufai made two self-indicting accusations: one, that he knows the people that organise the murders in his state and has not done much about them; two, that the government is as much a collaborator in these unending acts of violence. On the second point, he is getting consistent in incriminating himself and his government. With his mouth, El-Rufai had revealed in an earlier interview that he paid some killer Fulani herdsmen compensation for their losses in the conflicts. If El-Rufai is telling the truth about southern Kaduna leaders, what is deductible from both interviews is that the government itself has been complicit in the orgy of violence going on in that state. While his predecessors allegedly paid southern Kaduna leaders some money for their role in the violence, El-Rufai admitted that he pays his kinsmen. There is no question of justice for the victims of these massacres, it is about settling their killers.

So, again, what exactly did Mailafia say that warranted both a fine and a DSS invitation, but which El-Rufai has not more or less confirmed? Mailafia might have failed to substantiate his sources, but his assertions are not far from official reality. It is impossible that the government is completely clueless about the sources of the murders in Nigeria to the point that hardly anyone gets prosecuted for these crimes. What is true is what El-Rufai has admitted. And who is surprised? Violence has become a major enterprise, and it pays well for both the “ogas at the top” and the local power brokers who demand compensation for the price of peace. That is why the defence budget keeps expanding alongside the waistlines of the top brass of the Nigerian Army, but we are not any closer to achieving peace and stability.

The fact that perennial violence in Nigeria is not unconnected to the government’s machinations and their schemes to perpetuate themselves in power by mollycoddling killers is neither ground-breaking nor ear-shattering information. Government conspiracy against the people is a reality with which Nigerians have always lived. We already deduced that, but for a governor to publicly confirm it, is still huge. So, why has the DSS not invited El-Rufai like they did former House of Representatives Speaker, Ghali Na’Abba? What is hate speech that the DSS (and the NBC) chased people with sledgehammers compared to a governor publicly claiming that murderers have been paid -and are still being paid- for the rapacious violence they have perpetrated over the years? Should that not be enough to launch an investigation? But of course, even the DSS must know all of these already.

At this rate, one can only conclude that any speech that makes people like Mohammed and his paymasters uncomfortable is deemed hate speech. Their manic phobia for hate speech, as it is increasingly getting obvious, has less to do with the danger of further instigating crises that will add to existing ones. The push against “hate speech” is about maintaining a semblance of order even though reality shows that managing Nigeria’s problems is now totally beyond the limited capabilities of their regime. The focus on “hate speech” is to prevent people from talking about their failures. They know where that relative permissiveness got the last government, and they will do anything to repress dissent.