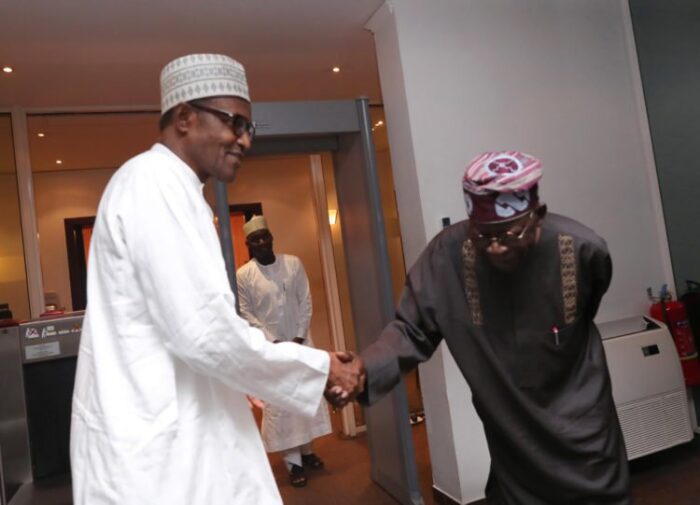 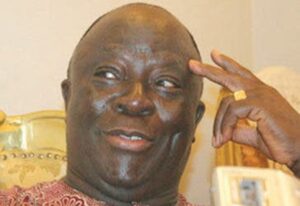 Following insinuations that the recent developments in the All Progressives Congress were indications of a rift between the President, Major General Muhammadu Buhari (retd.) and the National Leader of the APC, Asiwaju Bola Tinubu, Afenifere chieftain, Chief Ayo Adebanjo, has said he knew the President was allegedly deceiving Tinubu all along.

Adebanjo said the national leader was also deceiving the President as he described the APC as a gathering of incompatible persons. He argued that there was no ideology binding the party members together and that it was all about sharing offices and power.

Even though the Presidency said there was no rift between Buhari and Tinubu, many commentators described Thursday’s decision of the National Executive Committee of the APC to dissolve its National Working Committee as a blow to Tinubu, who is believed to be pro-Adams Oshiomhole, the sacked chairman.

There have been widespread claims that Tinubu, a former governor of Lagos State, was eyeing the presidency in 2023, and that the recent development in the party was a way of truncating his ambition.

Adebanjo said, “I have worries for him (Tinubu). He knew all these things but he relied on Buhari and worked to make him the President. I said it before publicly that Buhari is deceiving Asiwaju and Asiwaju is deceiving Buhari. Everybody is trying to use the other. Why can’t Tinubu hammer on restructuring knowing that this was what brought Buhari to office?

“I have been in this game for 70 years. So, many of those who are talking now were not born then. That is the truth – even Buhari was a toddler. He is now 74. Each time I tell you, why should Tinubu, the Vice-President (Yemi Osinbajo) and all those who were in Alliance for Democracy run to the APC? Why are they hesitating now to stand for restructuring? They can’t talk.

“All the things I am telling you now – it is not the first time. I said both Jagaban (Tinubu) and Osinbajo should get out of the APC. I said it openly. It is a disgrace and disservice to the Yorubaland. So, what is happening now shows there is nothing to bind them together.”

Why I haven’t decided on 2023, Tinubu reveals, says time not right

Meanwhile, Tinubu on Saturday broke his silence on the leadership crisis that rocked the party in recent times.

In a seven-page statement, Tinubu dismissed allusions that the dissolution of the NWC by the NEC at a meeting, presided over by the President and attended by top government officials and party chieftains, was targeted at his supposed presidential ambition in 2023.

Tinubu, who is not a member of NEC, stressed that he had yet to make a decision on 2023 given the health and economic crises occasioned by the COVID-19 pandemic, which had infected no fewer than 24,077 and killed 558 persons in the country as of Saturday.

He said rather than engage in politicking around 2023, he had devoted the last few months to thinking of policies that could help the nation during the present exigency.

Tinubu, who lost a close ally and former governor of Oyo State, Senator Abiola Ajimobi, to the virus on Thursday, stated that he found it distasteful talking about what he might do or not do in three years’ time (2023) when there is a national emergency. “2023 will answer its own questions in due time,” he added.

The statement titled, ‘Becoming the party we were intended to be’, partly read, “To those who have been actively bleating how the President’s actions and the NEC meeting have ended my purported 2023 ambitions, I seek your pity. I am but a mere mortal who does not enjoy the length of foresight or political wisdom you profess to have. Already, you have assigned colourful epitaphs to the 2023 death of an alleged political ambition that is not yet even born.

“At this extenuating moment with COVID-19 and its economic fallout hounding us, I cannot see as far into the distance as you. I have made no decision regarding 2023 for the concerns of this hour are momentous enough.

“During this period, I have not busied myself with politicking regarding 2023. I find that a bit distasteful and somewhat uncaring particularly when so many of our people have been unbalanced by the twin public health and economic crises we face.

“Personally, I find greater merit trying to help in the present by offering policy ideas, both privately and publicly, where I think they might help.”

Tinubu added that he had toiled for the party as much as any other person and perhaps more than most, and that like himself, no member of the party should have problem with making personal sacrifices.

He, therefore, appealed to the sacked NWC members and all party members to sheathe their swords.

…asks Oshiomhole to take responsibility for mistakes made

In the meantime, Tinubu, who commended the former NWC members for the party’s “great and important victories” under their leadership, especially in ensuring Buhari’s re-election, asked Oshiomhole to accept his mistakes.

Tinubu said he believed strongly that Oshiomhole tried his best but that his peace moves came late.

He added, “Those who disagreed with one another stopped trying to find common ground. Attempts were made to use the power of executive authority to bury each other. I must be blunt here. This is the behaviour of a fight club not the culture of a progressive political party.

“Some members went against their chairman in a bid to forcefully oust him. In hindsight, his fence-mending attempts were perhaps too little too late.

“I believed and continue to believe that Oshiomhole tried his best. Mistakes were made and he must own them. Yet, we must remember also that he was an able and enthusiastic campaigner during the 2019 election. He is a man of considerable ability as are the rest of you who constituted the NWC.”

Tinubu added that he hoped the disagreements in the party would be resolved but that order, party discipline and mutual respect “went out of the window”, leading to unnecessary court cases, which the President; the former interim chairman, Chief Bisi Akande; and himself condemned respectively.

“With lawsuits so numerous, one needed a spread sheet to keep track, President Buhari has reasonably decided that he had seen enough. I do not lament his intervention or its outcome. I lament that the situation degenerated to the point where he felt compelled to intervene.

“President Buhari is much more than a mere beneficiary of the party. He is one of its founding fathers. The APC does not exist in its current form without his singular contributions. That is not opinion; it is undisputed fact.

“President Buhari has done what any parent in his position and with his authority would do. The President has spoken and his decision has been accepted.”

He called on Oshiomhole to support the party’s candidate, Pastor Osagie Ize-Iyamu, in the September 19 Edo State governorship election.

He added, “In this, Oshiomhole has a crucial role to play. I encourage him, now, to return to Edo State to energise the campaign for the election of Pastor Ize-Iyamu.”