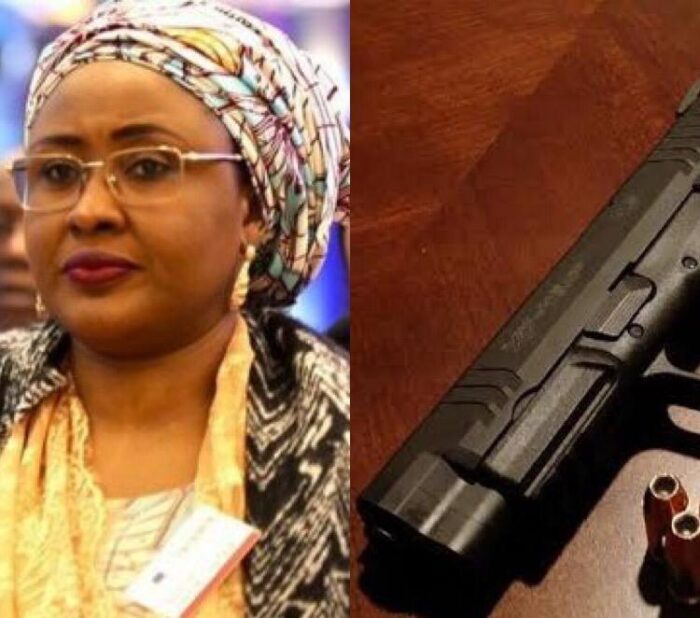 By now, most people have read the story of the scuffle that occurred between Mrs. Aisha Buhari, her children, and her security aides on one hand and Sabi’u “Tunde” Yusuf, son of Buhari’s niece who also works as his private secretary, on the other hand, which caused Aisha’s ADC to shoot at Sabiu inside the Presidential Villa, narrowly missing him.

Recall that I was the first to publicly publish the names of Muhammadu Buhari’s close relatives working for him in the Presidential Villa, including Sabiu Yusuf.

At the time I published the names, the regime activated its online troll factory to call my revelation “fake news.”

Daily Trust even refused to publish a column by Sonala Olumhense that repurposed my revelations of Buhari’s close relatives working in the Villa.

Now most of the names are in the open, and official communications from the presidency mention them.

Well, Aisha’s attempt on the life of Sabi’u “Tunde” Yusuf, a 30-something-year-old former recharge card seller in Daura who is now the third most powerful Nigerian after Buhari and Mamman Daura was a consequence of her frustration at not being able to take over power after Abba Kyari’s death.

Abba Kyari was the face of the cabal made up of Mamman Daura, Samaila Isa Funtua, Babagana Kingibe, and former DSS boss Lawal Musa Daura. Kyari was almost literally Buhari’s babysitter, which, as you would expect, made him Aisha’s sworn enemy, although Aisha got a heck of a lot of placatory concessions and favours from him.

When Abba Kyari contracted the coronavirus, Aisha and her children were ecstatic. The prospect of the cessation of Kyari’s grip on Buhari gladdened them to no end. They were so thrilled at the thought of his fate that they couldn’t contain it.

For instance, on May 24, shortly after news of Abba Kyari’s coronavirus infection became public knowledge, Zahra Buhari Indimi rejoiced on Instagram.“Earth is cleansing itself and it’s [sic] inhabitants,” she wrote. A few minutes later, she added: “Karma is the most patient gangster ever.”

Others called it what it was: perverse mockery of Kyari for testing positive for the coronavirus.

Even before Abba Kyari died on April 17, Aisha Buhari exploited the vacuum created by his absence to exert some influence and “cleanse” (to use her daughter’s words) the Presidential Villa of the bureaucratic vestiges of Abba Kyari. She caused Jalal Arabi, Permanent Secretary of the State House and Kyari’s underling, to be redeployed from the Villa.

In my April 18 social media intervention titled  “Abba Kyari’s Death, End of a Surrogate Presidency, and the Coming Chaos”  in the immediate aftermath of Kyari’s death, I told people to “Watch out for Aisha Buhari to assert herself more aggressively and to work to grab power in the fashion that Turai Yar’adua did.”

After Kyari’s death, she immediately got to work to get Buba Marwa appointed Chief of Staff to Buhari. Had that happened, she would have effectively taken over as president. Mamman Daura on whom Buhari has been emotionally and intellectually dependent for decades would never countenance that.

Babagana Kingibe, a member of the cabal who wanted to replace Abba Kyari as Buhari’s Chief of Staff, is one man with whom Mamman Daura was uncomfortable. Ibrahim Agboola Gambari emerged almost fortuitously as a compromise.

Of course, Gambari is known to Buhari. Apart from serving as his minister of external affairs when he was a military dictator in the 1980s, possibly on the recommendation of Tunde Idiagbon with whom Gambari shared Ilorin identity, Gambari was drafted to speak to presidents and international bodies to lend legitimacy and credibility to Buhari in the aftermath of his in-your-face electoral heist in 2019.

Nonetheless, had Indimi not pleaded with Buhari to consider Gambari for the Chief of Staff position, he wouldn’t have stood a chance.

It turned out, however, that Buhari and, most importantly, Mamman Daura had not yet been totally sold on the Gambari candidacy when news of his appointment littered social media.

A close friend to Aisha Buhari’s media consultant told me that it was Aisha Buhari who commissioned his consultant to reach out to social media influencers to spread the story of Gambari’s appointment. At the time I learned of this, it didn’t make sense to me because I knew she wanted Buba Marwa to succeed Abba Kyari.

Then, in an unusual move, the emir of Ilorin issued a public statement thanking Buhari for appointing Ibrahim Gambari, his uncle, as Chief of Staff to the President even though Gambari had not formally been announced by the presidency as Buhari’s Chief of Staff.

Apparently, realising that her candidate wouldn’t make the cut—and in order to forestall the possibility of Mamman Daura imposing a candidate on her husband— Aisha decided to compel Buhari into appointing her father-in-law’s candidate through artful social media manipulation.

I don’t know if she coordinated with the emir of Ilorin, but at the time the emir thanked Buhari for appointing his uncle, Buhari and Mamman Daura had not made up their minds on whom they wanted to be Buhari’s Chief of Staff.

So Buhari and Daura were dealing with three simultaneous pressures: social media chatter that Gambari had been appointed Chief of Staff when he hadn’t, the emir of Ilorin’s letter of gratitude for an appointment that had not been made, and Muhammadu Indimi’s push on behalf of Gambari. It was too much to resist, so they caved in at the last minute.

Why is this background important to the Aso Rock gunfight?

Well, it’s because Daura, having been beaten by Aisha in the choice of Gambari, decided to make Sabiu “Tunde” Yusuf, the son of his sister, the real Chief of Staff and a bulwark against Aisha’s encroachment into Buhari’s politics and policies.

As I noted in my May 30, 2020 column titled, “Gambari: Embrace and Alienation of an Outsider on the Inside,” “unlike Abba Kyari who had a direct access to Buhari and whom Buhari said all ministers should meet if they wanted anything from him, Gambari has an intermediary between him and Buhari.

And it isn’t just any intermediary; the intermediary is Buhari’s blood relative whom my November 23, 2019 column titled ‘Government of Buhari’s Family, By His Family, and For His Family’ exposed.”

In other words, Gambari has turned out to be not the Abba Kyari replacement Aisha had hoped he would be. Instead, Sabi’u “Tunde” Yusuf, her nemesis’ nephew, is the new Abba Kyari. Since the “Earth” hasn’t “cleansed” itself of the man like it did with Abba Kyari, she and her children wanted to do it themselves.

Sabi’u’s refusal to self-quarantine after potentially exposing himself to the coronavirus is, of course, a legitimate reason for Aisha Buhari to be antsy, but naked power grab is the real motive force for the animus against him.