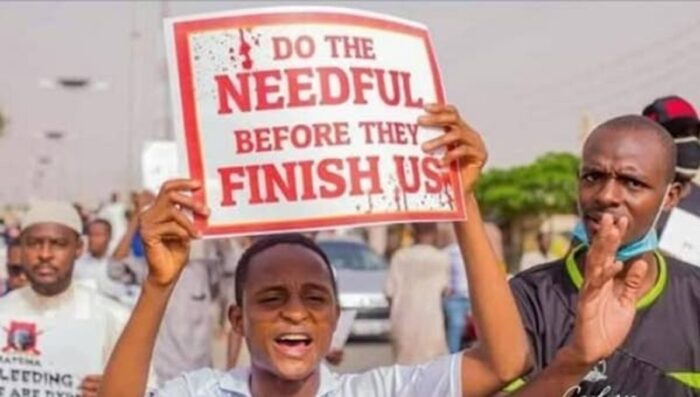 It takes a lot of outrage for the citizens of the state of a sitting president to take to the streets against him.

In the past couple of weeks, citizens of Katsina, the home state of Nigeria ruler, Major General Muhammadu Buhari (retd), have done exactly that.

Last Tuesday, Buhari, who is in his sixth year in power, during which the country has become wildly insecure, called on them to stop, affirming that the armed forces are “fully capable of dealing with the challenges of banditry and terrorism.”

The irony is bewildering, for as our people say, “If the man who slept indoors claims he saw a ghost, what should the one who slept outdoors say?”

Think about it: the president’s own townsmen and women coming under the hammer of bandits who inflict looting, arson, murder and rape.

For five years, during which Buhari flew around in the executive jets he had promised Nigerians he would either sell or convert into a national airline, this had been happening not only in the northeast, but in other zones.

In response, Buhari said all was well.

He and his officials routinely claimed that Boko Haram and insecurity were defeated.  Largely, they would say.  Or technically.  Or mostly.  Or vastly-degraded.

They would swear that Boko Haram held no Nigerian territory any longer.

When Nigerians pointed out instances of armed Fulani herdsmen onslaught on innocent farmers and villages, Buhari denied the accounts and shifted the narrative.  He claimed they were foreigners from other places such as Iraq or Libya.  Perhaps; but why wouldn’t he stop them?

On one occasion, he urged the grieving community of Benue State, where a major massacre had taken place, to “accommodate your countrymen.”  Upon another, he blamed the killings on “disgruntled politicians” who had “lost out politically.’’

It is no surprise that the infection, left untreated, has mutated, and spread, leaving Buhari’s incompetence and his absolute lack of compassion and empathy, deeply exposed.  This month, even his own people began to demand his resignation.

But neither ineptitude nor insecurity nor economic collapse nor an anti-corruption hoax can compel Buhari from the path of bravado.  In the statement by a spokesman later last Tuesday, he informed the Katsina people that he had since approved a joint military and police operation to rid the Northern states of bandits.

Note that he said, “approved.” The “Operation Accord” operation did not necessarily exist.

And oh, among their weapons, Buhari said, would be “more night vision aircrafts (sic).” Meaning that the security forces had been using such aircraft on a rag-tag militia which lacks them, but yet continues to flounder.

“Nigeria’s military has displayed its capabilities in the past and will show it again by dealing with the current challenges,” he declared.

But that false confidence lasted only two days.  By Thursday, Buhari was railing against the same security chiefs, telling them—after five years—that their efforts against insurgency have not been good enough.  He spoke of efforts, of course, not the untouchable officials.

And he said nothing about his own shortcomings or excuses.  And he offered no apologies.

In any event, his “warning” came only after the United States condemned the “recent senseless and brazen killings of civilians in northern Nigeria,” not before.

In its statement, signed by Secretary of State Mike Pompeo, the US urged Buhari’s government to “do more to strengthen ongoing efforts to address this violence, hold those responsible accountable,  and protect  civilians.”

Accountability?  Do you mean a single standard for all Nigerians, Mr. Pompeo?

The point is: it took another country’s intervention to compel Buhari’s attention.  But Nigerians had been crying to him for years.

And the North, after its understandable hesitation, has in the past year become his harshest critic.  In February, the Northern Youth Coalition (NYC) was first to demand his resignation.

The coronavirus pandemic then intervened in favour of the Nigeria ruler.

But as he commemorated Democracy Day 10 days ago with a speech which was barely about democracy, a Coalition of Northern Groups lamented that Nigeria was suffering through “the worst set of incompetent leaders.”

Buhari responded with a peculiar regret of his own: that being 2020, the youths ought to thank their stars Nigeria is now operating a “truly democratic government” in which free speech is guaranteed.  That is: had it been 1983, he would have taught them the spelling of pain.

But earlier last week, the Northern Elders Forum similarly expressed alarm about the menace of armed gangs roaming towns and villages at will, killing, looting, and raping.

“It would appear that the administration of President Muhammadu Buhari and governors have lost control over the imperatives of protecting people of the North, a constitutional duty that they swore to uphold,” it said.

That was followed by the Sultan of Sokoto, Muhammed Sa’ad Abubakar III, on behalf of Jama’atu Nasril Islam, blasting the government’s failure to halt the crime wave.

Buhari ignored them all, as he had for five years, only to offer “Operation Accord” to placate the US.

Hopefully, this magical “operation” works, but that is doubtful.  In five years Buhari has not accomplished even one of his electoral promises.  But for the pandemic, he would have been abroad reading meaningless speeches or looking after himself.

These have been years in which he relied on aides to speak for him.  For a man who had talked so much about the wonders he would perform, he can no longer speak for himself.

But this is not difficult to explain: Insecurity has grown worse because of Buhari’s lame leadership, for which he now blames the same ineffective contingent he has nurtured in office, placing their loyalty to him over commitment, competence or service; substituting bombast for achievement.

The truth is that but for the US, Buhari would have continued to maintain his silence.  “Tens of thousands of civilians have lost their lives in Nigeria in recent years to violent attacks  by  terrorist groups  or  criminal gangs, in inter-communal violence, or due to their religious beliefs,” Pompeo wrote.

But that should not have been needed because Nigerians have cried out to Buhari about it for years, including in the Northeast, Northwest, Middle Belt, Rivers State, and everywhere in between.

No, Buhari did not start these problems.  But he has made them far worse.

And he is a talker, not a doer. Which is why he is the problem.

But a problem never solves itself, let alone another problem. That is why those who understand the time of day must ensure that he resigns NOW.  Not a coup, and not violence.  He must go.

We cannot afford a nation where one insensitive public official can give his children an executive jet for intercontinental errands while the wives and daughters of others are being raped and murdered, and their communities burned to the ground.

This is critical for Nigeria, but it is even more so for the North.