Home Columnist North must stop relying on quota system to get govt jobs –... 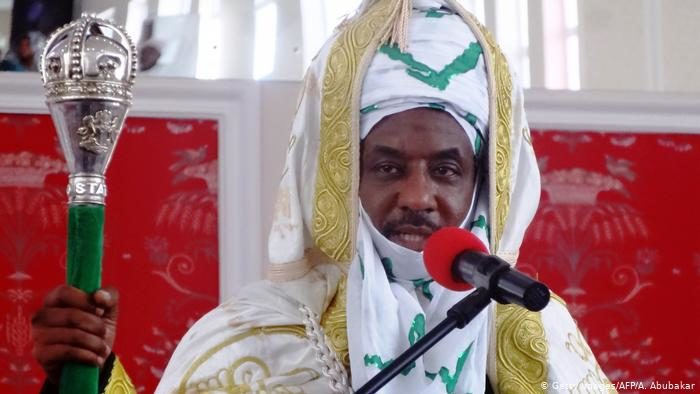 The Emir of Kano, Muhammadu Sanusi II has said that education is the only way northern youths can compete with their counter parts in other parts of the country.

Sanusi, who spoke at the 60th birthday of  Kaduna State Governor Nasir El-Rufai, in Kaduna on Monday, highlighted the main problems facing the region as poverty, millions of out-of-schoolchildren, malnutrition, drug abuse, Almajiri and the  Boko Haram insurgency.

The emir, who insisted that no  “true  Northern Nigeria leader” was happy with the problems, said the North should stop relying on quota system and federal character.

He said the challenges facing the region must be addressed immediately.

The traditional ruler said this a week after the World Bank in a report said 87 per cent of the poor in the country resided in the North.

The World Bank also described the North-West as home to almost half of all the poor in the country.

At El-Rufai’s 60th birthday, Sanusi singled out the Kaduna State governor for praise. He said El-Rufai ‘s investment in education would go a long way in addressing poverty.

He called on other northern elites to follow in the ex-Minister of the Federal Capital Territory’s footsteps.

According to him, investing in education is the only way the region will save itself from the imminent destruction.

The ex-Governor of the Central Bank of Nigeria lamented that 87 per cent of the country’s poverty rate was in the North, with nine states in the zone constituting almost 50 per cent of the malnutrition burden of Nigeria.

Sanusi said the region should not continue to rely on quota system and federal character to get jobs for its children at the expense of the other parts of the country busy educating their own children and turning out graduates.

The emir said, “When we talk about birthday, we talk about happiness. Just last week, someone asked me, ‘ are you happy?’  And I said,  ‘ I am not’. And the person was surprised. The truth is, nobody who is a leader in Northern Nigeria today can afford to be happy.

“You cannot be happy with about 87 per cent of poverty in Nigeria being in the North. You can’t be happy with millions of northern children out of school.

“You can’t be happy with nine states in the North contributing almost 50 per cent of the entire malnutrition burden in the country.

“So, we wish Nasir a happy birthday, but we do not want him to be happy as a leader. Because you are happy when you think you have reached a state of delivering and taking your people to where you want them to be.

“Now, because of the condition of Northern Nigeria, it is almost correct now to say that, if you are seen as normal, if you are a governor in the North or a leader in the North, and you are seen as normal in the sense that you continue to do what your predecessors have been doing, doing the same thing, which has been normalised, then, there is something wrong with you, you are part of the problem.

“The real change in the North will come from those who are considered mad people, because you look around and say if this is the way we have been doing things and this is where we have ended up, maybe we need to do things differently.”

Sanusi urged political leaders, especially, the regional governors to emulate “the sternly quality” of the  Kaduna State governor, commending him for injecting 40 per cent of the budget of his state into education.

He said,  “And the truth is, if you look at what Nasir is doing in Kaduna, with 40 per cent of his budget in education, that is the only thing that is going to save the North. I know that, when we say these things, they don’t go down well.

“We have been saying this for 20 to 30 years. If the North does not change, the North will destroy itself. The country is moving on. The quota system that everybody talks about must have a sunset clause.

“The reason people like Nasir stand up and they are nationalists is that they don’t have any sense of inadequacy.

“So, as we celebrate Nasir at 60, we need to celebrate him as a public officer who is addressing the core problems of his constituency. It is education, it’s girl child education, it’s women’s right, it’s child begging, it is parental irresponsibility, demographic growth, it’s managing a multi-cultural, multi-ethnic and multi-religious society and bringing them into one community where they are all citizens and he has done a lot that we can learn from.

Meanwhile, the emir asked that issues of religion or tribe should have no place, but rather emphasis should be on merit.

He said, “You don’t need to rise on being from Kaduna State or being from the North or being a Muslim to get a job, you come with your credentials, you go with your competence, you can compete with any Nigerian from anywhere.

“We need to get northern youths to a point where they don’t need to come from a part of the country to get a job. And believe me, if we don’t listen, there would be a day when there would be a constitutional amendment that addresses these issues of quota system and federal character.

“The rest of the country cannot be investing, educating its children, producing graduates and then they watch us, they can’t get jobs because they come from the wrong state, when we have not invested in the future of our own children.

“We have just heard how he (governor)  has developed himself over the years. He is a surveyor, he is a lawyer, he has got  a master’s degree, he has had over 80 certificates from Havard, because education is what makes a man.”

The emir noted that power only comes from God and that it is transient, calling on leaders to leave behind legacies.

He said, “It is important to realise that the positions we hold are transient and they do not define us.

At the event, the Senate President, Ahmed Lawan,  likened the frightening number of out-of-school children in the North to a time bomb.

The Senate President said a report that  13 million or 14 million out-of-school children were in the north was dangerous for the country. He noted that the North as a region must brace itself and reverse the ugly trend.

“Until we are able to reverse this kind of trend, no matter how much infrastructure you put, you will still have that social angle that will actually lead to serious insecurity, the kind that we experience or even worse, God forbid. So, we need to look at the people,” Lawan said.

He also called on the Federal Government, to as matter of urgency, introduced policies that would return the over 13 million out-of-school-children to school to curb the rising number of illiterates in the country.

Besides, the Senate President said the country was at a crossroads, calling on Nigerians leader to come together and discuss Nigeria’s unity.

The Senate President said, “Nothing has been done to address the multifaceted problems bedevilling the country like the issue of out-of-school children to me this is a time bomb.

“Those of us in leadership positions, we know what we need to do. We need to have courage and commitment and sustain them.

“Nigeria is at a crossroads, and more than ever now requires the unity of the people. The issues bedevilling Nigeria today require that all leaders, at all levels and in all parts of Nigeria come together.”

El-Rufai told his audience that one of the most daring decisions he had taken was picking a fellow female Muslim as his deputy.

He said the choice was made to downplay religion and ethnicity in Kaduna State, having inherited a state that was so ethnicized and religionized.

El-Rufai said, ”A lot has been said about some the decisions I have taken over the years, what people call daring decisions.

“Let me make a confession today. All the examples of the decisions that I have made that are supposed to be daring and courageous; the most daring one is that last year, I took a decision to pick a woman, a Muslim, as my running mate to contest election in Kaduna State.

“It was the most daring decision I have taken because in this state, everything is religionised.

“We are trying to cure our state of that religionisation and ethnicisation and I thought the best way to do it is to take religion off the table of Kaduna State politics. That was why we finally settled for Dr. Hadiza Balarabe.”

The Ooni of Ife, Oba Adeyeye Ogunwusi,  described El-Rufai as a small man with massive capacity for results.

Ogunwusi said Nigeria as a nation needed the likes of El-Rufai who would take tough decisions to achieve the much-needed results.

The Secretary-General of the Arewa Consultative Forum, Mr. Anthony Sani, said Nigerian leaders must come together to tackle problems facing the country.

The ACF secretary said, “When the Emir of Kano, Sarki Kano Muhammadu Sanusi 11 says if the North does not stand up and confront the prevalence of Almajirai, out-of-school children, girl-child education and drug abuse among youths, as well as against poverty that comes with unemployment and ignorance and population explosion, the region can get to a tipping point, he is stating the truism. A truism in the sense that all the listed challenges are harbinger of insecurity. I want to add the fact that these challenges can transcend regional boundaries.

He recalled that kidnapping started in few states before spreading to other parts of the country.

According to him, not only Northern governors,  but all leaders across the country must come together to solve the problems.