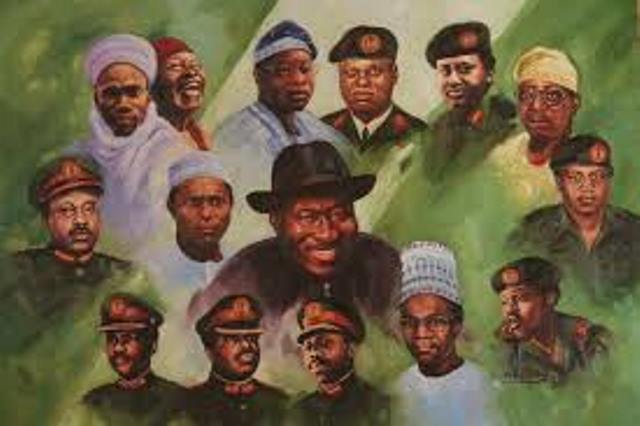 Nigerian presidents and Heads of State

Nigeria’s education system robs Nigerians of basic knowledge about their country and its people. That’s why although ethnic identity is a central part of Nigeria’s national imagination, most Nigerians know awfully little about the ethnic identities of their rulers.

In the absence of accurate, official information, most people have resorted to assumptions, guesswork, and outright falsehoods on the ethnic origins of their rulers—and on most things about the country, leading me to once characterize Nigeria as a “know-nothing nation” in my August 10, 2013 column.

I have chosen to dedicate today’s column to providing accurate, verifiable information about the ethnic identities of Nigeria’s past presidents and heads of state.

He came from a small ethnic minority group called the Gere, whom Hausa people call Bagere or Bageri (singular) and Gerawa (plural). Gere is not mutually intelligible with Hausa or Fulfulde. It’s a wholly separate ethnic group that traces distant roots from what is now Chad.

As I pointed out in my January 23, 2016 column titled “Gere:Sir Abubakar Tafawa Balewa’s Real Ethnic Group,” a 1905 Journal of the Royal African Society article by a G. Merrick titled “Languages in Northern Nigeria” said the Gere are “closely related to the Bolewa [a minority language spoken mostly in Fika Emirate in Yobe State] and living to the west of them.”

As I pointed out in my April 3, 2016 column titled “Nigerian Languages are More Closely Related Than You Think,” “Another surprising fact about Nigeria’s language family classification is that Hausa, the most prominent member of the Afro-Asiatic family in Nigeria, shares the same ancestor with the Angas of Plateau State. In fact, just like Hausa, Angas belongs to the Chadic subfamily of the Afro-Asiatic language family. Yet two ethnic groups couldn’t be more culturally different than the Hausa and the Angas.”

His paternal identity is shrouded in controversy. But the most credible clue to his paternal identity, in my opinion, is the assertion that his father was from northern Edo State. A man by the name of Austin Braimoh, who says he is Murtala’s paternal first cousin, wrote in a February 19, 2016 Vanguard article titled “Remembering Murtala Mohammed” that Murtala’s father’s name was Dako Mohammed and that he migrated to Kano from the village of Igbe in the Auchi area of Edo State after briefly living in Lagos.

“It is well documented that General Murtala Mohammed made efforts to reach out to his paternal relations before his demise,” he wrote. “Two months into his tenure as Head of State, he was at Auchi to confer with the Otaru of Auchi Alhaji Guruza Momoh. He invited him to join him to that year’s Hajj in Mecca. On his way out of Auchi, he directed that a mosque be erected at Aviele, near Auchi in a predominantly Muslim settlement. The mosque was completed after his death and named after him.”

Given the number of people with “Auchi” ancestry who rose to prominence in the Kano society, including the legendary Isyaku Rabiu, this claim isn’t far-fetched.

I’d rather go with his self-definition of his ethnic identity than the evidence-free claims of others. 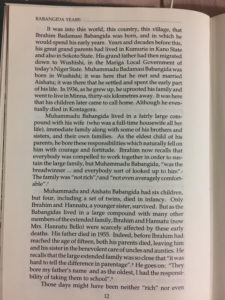 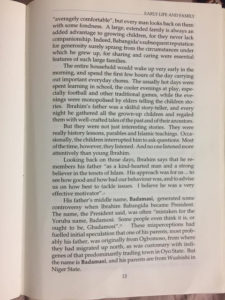 Another prominent Tuareg family in northern Nigeria that people mistake for Fulani is the Baba-Ahmed family in Kaduna State.

As I pointed out in my August 3, 2013 column titled “What’s REALLY President Goodluck Jonathan’s Ethnic Group?” while Ijaw belongs to the Atlantic-Congo branch of the Niger-Congo language family, Ogbia belongs to the Central Delta subphyla, but historians say the ancestors of the Ogbia people most likely migrated to their present location from present-day Edo State. Ogbia has its own dialects, which are all mutually intelligible, according to Ethnologue. They are Agholo (or Kolo), Oloibiri, and Anyama.

A distribution of the paternal ethnic identities of Nigeria’s presidents and heads of state shows that the Hausa and the Fulani each had two, and Yoruba, Igbo, Angas, Ogbia, Tuareg, and Etsako (or Afenmai) each had one.

Of course, that’s simplistic. Identity in northern Nigeria is more complex than that. Religion is a more important marker of identity than ethnicity is. For instance, although Abubakar Tafawa Balewa was Gere, he was culturally Hausa and was indistinguishable from a Hausa or Fulani Muslim.

Nonetheless, in the interest of historical accuracy, it doesn’t hurt to be familiar with the facts about the ethnic identities of Nigeria’s past and present presidents and heads of states.

Postscript:
The omission of Sani Abacha from the list wasn’t deliberate; it was an oversight. Abacha was a Kanuri man who was raised in Kano. His prominent Kanuri facial marks were the most visible stamps of his Kanuri ethnic identity.

Nnamdi Azikiwe had no executive powers and Ernest Shonekan was an extension of IBB’s regime. In any case, the Igbo and Egba/Yoruba identities of Azikiwe and Shonekan are not in doubt.

Culled from notes from Atlanta