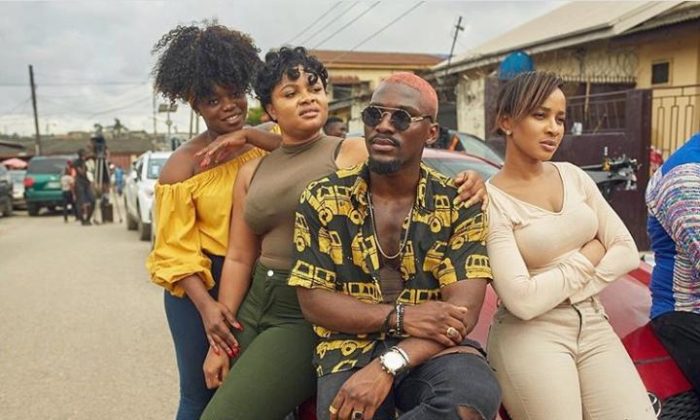 Tobi Bakre with fellow actors on set of Sugar Rush

This movie will be in cinemas this Christmas and packs a star-studded cast that includes another former BBNaija housemate Bisola Aiyeola, Toke Makinwa, Adesua Etomi, Omoni Oboli, Bankole Wellington, and other familiar faces in Nollywood.

The Columnist gathered that D’Banj who will be headlining the ‘Made in Lagos’ festival on the 23rd of December 2019 will make an appearance and give his own production outfit, DKM media, its first film credit, alongside prominent Nollywood production companies, FilmOne and Jungle Filmworks.

This is not going to be Tobi Bakre’s first time on screen as he has made appearance on television shows. This will however be his first movie.

The 25-year-old has not slowed down since the end of BBNaija (Double Wahala) in 2018. In fact, his name is on the lips of almost all entertainment enthusiasts in Nigeria due to his work rate.

From hosting big events to appearing in TV commercials, Bakre has become an A-lister.