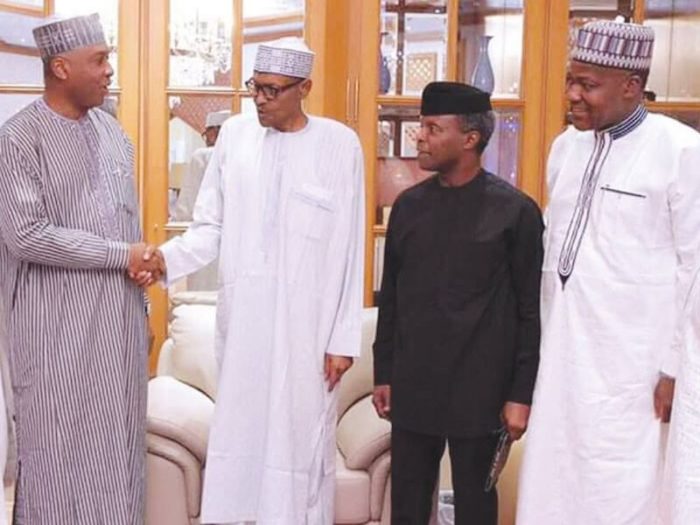 The presidency has appealed to the President of the Senate, Dr. Bukola Saraki, and the Speaker of the House of Representatives, Hon. Yakubu Dogara, to reconvene the National Assembly in order to expeditiously consider several urgent matters pending before it.
The Senior Special Assistant to the President on National Assembly Matters (Senate), Senator Ita Enang, made the appeal at a press conference in Lagos at the weekend, saying the lawmakers needed to urgently consider some important pending issues in national interest.

The presidential aide said if the National Assembly is not reconvened immediately, it might adversely affect the country, particularly with respect to the 2019 general election, the budget for which is pending before the federal legislature.
But the acrimony between the ruling All Progressives Congress (APC) and the leading opposition Peoples Democratic Party (PDP) seems determined to jeopardise the presidency’s appeal as both parties remained at each other’s jugular yesterday.
While the PDP accused the APC-led federal government of plotting to forcefully reconvene the National Assembly with a view to effect leadership change, the ruling party insisted that Saraki having defected to the opposition party must step down as the president of the Senate.
However, Enang solicited for peace weekend, saying the quest for the legislature to reconvene was an appeal, not compulsion.
He warned that the lawmakers’ holiday, which began on July 24 and ends on September 5, might stall the allocation of funds to critical sectors of governance and the economy.
The supplementary funds would enable the Independent National Electoral Commission (INEC) to commence preparations for the 2019 polls, he said.
Also pending are several key appointments for the Economic and Financial Crimes Commission (EFCC), Independent Corrupt Practices and Other Related Offences Commission (ICPC), Deputy Central Bank of Nigeria (CBN) Governor and Asset Management Corporation of Nigeria (AMCON), Code of Conduct Bureau, among others.
Saraki had announced the adjournment at plenary following a motion on alleged siege to his home and that of the Deputy Senate President Ike Ekweremadu by security operatives.
Enang also appealed to party leaders and various caucuses in the National Assembly to prevail on their leadership to reconvene to treat pending pressing issues which needed urgent attention.
He added that though the lawmakers were entitled to holiday and vacation, their rules permit them to reconvene where there are urgent and pressing national issues to deal with.
The presidential liaison officer contended that the issue of defections of some lawmakers from the APC to the PDP was a political matter that should not affect national issue.
He also said the defections do not affect the credibility and performance of the APC-led federal government.
He said, “In fairness to the National Assembly, they scheduled to consider these matters on the 24, 25 and 26 of July, but certain unforeseen events happened that they had to adjourn. Therefore, they did not deliberately keep these matters and went away.
“The matters include, virements, settlement of appointments, supplementary budget, borrowing plan, INEC fund and so on.
“I want to say that we are appealing to the National Assembly, that we accept that it was not intended by them that the country should suffer. They had made plans to approve this before the exigency that made them to adjourn, but I want to appeal to them, that they should please consider reconvening for the purpose of considering these urgent matters which are capable of making the government not perform and deliver on time.”
Enang noted that if the supplementary budget is not attended to and passed, “the money that is intended to enable INEC to prepare for the 2019 election will not be released and the virement that is supposed to enable funds to be available to other sectors of the economy will not be available and, so, budget cannot really start performing.
“We are appealing to Senate leadership and all caucuses of the National Assembly to see this as a clarion call for the good of the nation.
“As the Liaison Officer between National Assembly and the federal government, I know it is not the intention of the lawmakers to make Nigerians suffer.
“We are not compelling them, we are appealing to them.”

Meanwhile, the PDP has asked Nigerians and the international community to hold the APC and the federal government responsible should the nation’s democracy fall under any harm in the coming days, alleging that the government was planning to forcefully take over the National Assembly and effect leadership change.
The party in a statement by its National Publicity Secretary, Mr. Kola Ologbondiyan, said it had earlier alerted the nation that the purported overseas vacation by President Buhari was to enable his men overrun the National Assembly in a manner reminiscent of the siege to the Benue State House of Assembly, so as to sack the current elected Senate leadership and install his loyalists.
“When this is done, the Buhari Presidency will in its characteristic response claim the Mr. President is unaware,” it said.
The PDP, however, cautioned that Nigeria as a nation will never allow such direct assault to the highest symbol of the democracy in the state. It said, “The laws of our nation regarding the sanctity and sovereignty of our legislature are clear and our citizens will never allow any person or group of persons, no matter the circumstances, undermine the constitutional integrity of the legislature as representatives of the people. Any attempt to tempt the will of the people in this direction is a clear recipe for very serious crisis.”
The APC in its response yesterday said it would ensure that the Saraki did not return to his seat by using its majority in the Senate to remove him.
However, the ruling party said that it would not be a part of any illegal plot to unseat the Senate president as was being alleged by the main opposition party and the reformed All Progressives Congress (rAPC).
In a statement by the Acting National Publicity Secretary, Mr. Yekini Nabena, APC said it would encourage its lawmakers to use their numerical strength to remove the Senate president following the rule of law and due process.
It said, “The hierarchy of the APC has no business spending money to impeach these people because APC still commands the majority in both houses. Since Saraki has gone back to where he came from, he cannot preside over majority APC lawmakers. Therefore, we will use our numerical strength to remove him following the rule of law.
“So let the PDP propaganda machine continue to raise false alarm. We will remain focused and ensure that President Buhari is not distracted by charlatans. Very soon we shall separate the men from the boys.” Regarding the claim by rAPC spokesman, Prince Kassim Afegbua, that APC leadership and the federal government were plotting to use illegal means to forcefully re-open the Senate chambers, the party accused opposition of merely weeping up sentiments.
It said, “Afegbua and his cohorts are trying to elicit sentiment and to make futile attempt to dent the integrity of the APC-led government.
“The reason why most of them are defecting is because the President Buhari-led administration is not sharing money, which is the PDP philosophy. So this administration cannot inject tax payers money into impeaching the President of the Senate or the Speaker of the House of Representatives.”
The rAPC had raised alarm over alleged fresh plans to impeach Saraki by agents of the ruling party.
In a statement issued yesterday by Afegbua, it said the leadership of the APC met with two top federal government officials last weekend to perfect plans to employ illegal means to unseat the Senate president as well as other opposition elements holding principal offices in the Senate.
In the statement, rAPC said, “We can bring you news that the disputed leadership of the APC, working in cahoots with the Attorney General and Minister of Justice coupled with the Secretary to the Government of the Federation have perfected their plans to apply Gestapo methods to forcefully unseat the Senate president.
“A high-powered meeting of these persons was held at the Maitama residence of the disputed Chairman of the APC on Thursday, August 2, 2018 where they brainstormed on the possible ways to carry out their illegality.”
The rAPC said the meeting which lasted for three hours, as confirmed by an insider source, explored both legal and illegal approaches to execute the assignment of ensuring that Saraki ceased to be the Senate president.