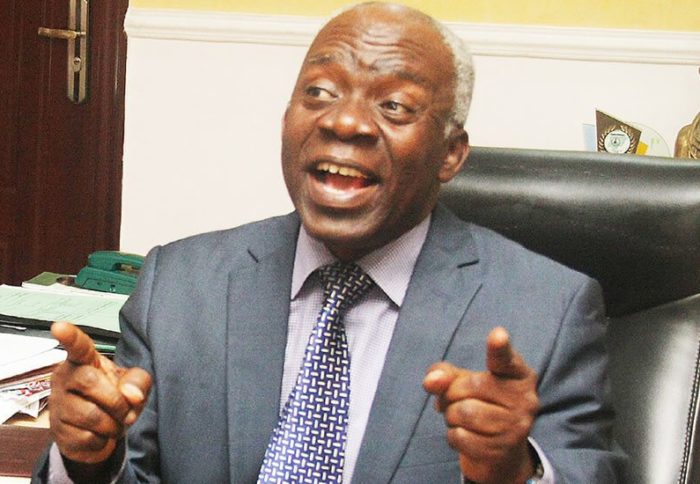 A human rights lawyer, Mr. Femi Falana has said the All Progressives Congress (APC) cannot remove the Senate President, Dr. Bukola Saraki without the required two-third majority of the entire members of the upper chamber of the National Assembly.

Falana, a Senior Advocate of Nigeria (SAN), has also justified the defection of Governors AbdulfatahAhmed, Samuel Ortom and Aminu Tambuwal of Kwara Sokoto, Benue and States from the APC to the Peoples Democratic Party (PDP), citing a precedent by the Supreme Court.
He canvassed these positions in a statement he issued yesterday, stressing that even though the defection of the Reformed APC (R-APC) lawmakers was illegal and unconstitutional, the APC “lacks the moral and political right to condemn their defection to the PDP.”
Due to irreconcilable differences that plagued the APC just after the 2015 elections, the last fortnight has witnessed the defection of Saraki, Ahmed, Ortom, Tambuwal and scores of lawmakers in the National Assembly and State Houses of Assembly to the PDP.
Consequently, the PDP alleged that the federal government and the APC had started shopping for “a fraudulent interim court order to declare vacant the seat of the Senate President following his defection from the APC to the PDP.
In a three-page statement, the senior advocate cautioned against the illegal plot to remove Saraki as the Senate President, lamenting that the crisis of misgovernance in the country “has been accentuated by the official impunity of members of the ruling class.”
He also lamented that the executive “is justifying disobedience of court orders while legislators regularly suspend their colleagues and carry out impeachment of governors outside the ambit of the 1999 Constitution of the Federal Republic of Nigeria.”
On the alleged plot to remove Saraki, Falana noted that section 52 of the 1999 Constitution provided the requirements for the impeachment of the Senate President and the Deputy Senate President, which should be fulfilled to remove Saraki.
Specifically, Falana explained that the section “provides that the Senate President and the Deputy Senate President can only be removed by the resolution supported by the votes of not less two- thirds majority of the entirety of the members of the Senate.”
The senior lawyer noted that since the APC legislators “cannot muster the required two-third majority of the votes of the entire members the plan to impeach Senator Saraki should be dropped forthwith.”
The human rights activist explained that the scenario playing out in the Senate was without precedent in our political history, though explained how the accord between the National Party of Nigeria (NPN) and Nigeria Peoples Party (NPP) collapsed in the Second Republic.
Falana added that when the accord collapsed in the Second Republic, the Speaker of the House of Representatives, Hon. Ume Ezeoke of the NPP, a minority party in the lower chamber of the National was not forced to resign.
He explained that the election of Tambuwal as the Speaker of the House of Representatives was made possible by the alliance of the APC and defunct Action Congress of Nigeria (ACN) legislators.
Falana added that when he decamped from the PDP to the APC, Tambuwal was not asked “to step down from the office of the Speaker. Therefore, the APC should stop from demanding the resignation of Saraki as Senate President.”
On the governors’ defection, Falana observed that the 1999 Constitution “is silent on defection by the president and state governors from the political parties which sponsored their election.”
He, however, cited a decision of the Supreme Court in a case between Atiku Abubakar v Attorney General of the Federation (2007), which upheld that Abubakar’s defection from the PDP to the defunct ACN was not illegal and unconstitutional.
Contingent on this judicial precedent, Falana said the decision of governors “to dump the political parties which sponsored their elections was not challenged.
“I have therefore, canvassed the argument that the defection of Tambuwal, Ortom and Ahmed from the APC to the PDP cannot be said to be illegal or unconstitutional,” he added.
Also citing the decision of the Supreme Court in a case between Abegunde v Ondo State House of Assembly (2014), the senior advocate admitted that the defection of the R-APC legislators from the APC to the PDP and ADC “can be impugned under section 68 (1) (g) of the 1999 Constitution.”
Since the APC had allowed legislators to decamp from the PDP to join its fold recently, Falana noted that the ruling APC “lacks the moral and political right to condemn the defection of the R-APC legislators”.
“But the crass opportunism of the APC cannot legitimise the prostitution of the political system,” he said.
“Having decamped from the APC, which sponsored their elections, the R-APC defectors ought to resign from the legislative houses and seek a fresh mandate from the electorate. In order to curb the dangerous trend, some aggrieved members of the constituencies of the defectors ought to contest the legal validity of the refusal to resign from the affected legislative houses,” Falana suggested.