Home Columnist Oba of peace and tranquility – By Yakubu Mohammed 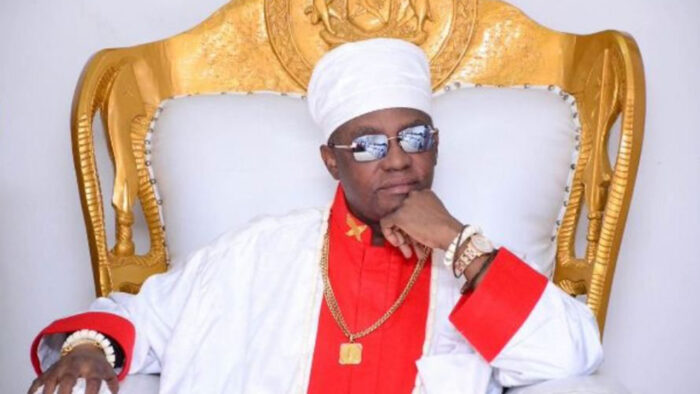 The Oba of Benin is truly a monarch after my heart. Omo N’Oba N’Edo Uku Akpolokpolo, Oba Ewuare II will be four years on the throne of his ancestors in October this year. And he will have something to celebrate. In so short a time, he has recorded many outstanding achievements. Not the least of them  was the speed with which  this former diplomat sent land grabbers, robbers, kidnappers and cultists out of Benin to pave way for peace and rapid  development in the land.

Another major achievement which entitles him to a bragging right is the war he has so far, almost successfully, waged against human traffickers who made prostitution, at home and abroad, especially in Italy a flourishing but tragic industry.

This stigma of a trade was, for the new monarch, an unbearable abomination, some egregious oddity that must have riled his ancestors for long. Oba atokpeehi! May you live long.

Commendable as these giant strides are, they don’t, in my estimation, equal the single but the most lasting feat he recorded last week. A governorship election is around the corner in Edo State. It is no longer news that this electoral battle promises to upstage all other governorship elections in recent history in terms of violence – the fire and the brimstone that the gladiators have promised to unleash to secure victory.

But His Royal Majesty, the  Oba  of peace and tranquility, has vowed it would not happen in his kingdom and in  his own time. In July, he led a delegation of his chiefs to the Villa to see President Muhammadu Buhari, not to seek his support and endorsement for  the incumbent governor as some other traditional rulers are wont to do. No, he went there  to complain about the war mongering activities of the  two major gladiators, Comrade Adams Oshiomhole, former governor of the state and erstwhile national chairman of the ruling All Progressives Congress, APC and the incumbent governor, Godwin Obaseki, one time friend, now foe, who are hell bent on  setting his kingdom on fire. The pre-election violence is like a civil war with each party accusing the other of importing thugs and professional killers from some states famous for being the citadels of electoral crimes and criminalities where  thugs kill and maim without consequence.

On his return to Benin, this quintessential diplomat-turned Oba moved almost with the speed of light and summoned the state’s major gladiators for some tongue lashing.  Comrade Oshiomhole, in his trademark labour union outfit, and  his protegee Pastor Osagie Ize-Iyamu, APC candidate, came in and took their seats. Governor Obaseki was accompanied by  his deputy, Phillip Shaibu. Present for some strategic reasons was ex-chairman of the All Progressives Congress  former governor, John Odigie Oyegun. They all  waited patiently, apparently looking contrite but tensed, while the monarch took some time to make his royal entry into the chamber and unto his throne.

It was indeed a significant  day in the life of the kingdom and the Oba said so himself. Courtesy of Channel Television, it was also a spectacle to behold. After some pleasantries, the Oba went straight to the point. He was shocked and saddened by the turn of events in the state. In the last few months, the state, he said, had been in the news for all the wrong reasons. What he thought was going to be marked by tranquility had turned into an unprecedented conflict and he would not have it anymore. Enough, he said, was enough.

But before he proceeded  with the  tongue-lashing, he gave  some background to the crisis. He said he was close to the gladiators and he was privy to the process that produced Obaseki as Oshiomhole’s successor.

When his opinion was sought by the out-going governor some four years ago, he did not say any word. But Governor Oshiomhole persisted. He even got businessman Aliko Dangote to speak to the  Oba. The the richest man in Africa pressed the Oba to speak out on the matter so they would know what he thought about the choice of Obaseki but still mum was the word until Aliko  offered  to stand in as surety for Obaseki in case he failed to perform.

Oba Ewuare II said he was shocked that the matter was taking that strange turn with an outsider  coming into the picture. When he was finally  persuaded to say something, the  diplomat in him took over. Oshiomhole, he said,  presented Obaseki, not as a proposal, but as an imposition, a done deal. At that point he had no opinion  though he said that  he was not against the choice of Obaseki.

What he could not understand, however, was why he was disqualified by the party’s screening  committee based on the documents that had qualified him four years ago to contest. He was worried that the state was put in a state of confusion; everybody, including the media, was  in a state of confusion.  And so was the rest of the world – with predictions of blood bath even by foreign media.

But now that they had gone their separate ways, yesterday’s friends now today’s political foes, the least he expected was for  all of them  to play the game according to the rules and maintain peace because Benin is not a city of blood, contrary to what a foreign author had published.

We are all a family, he reminded them. When we quarrel we settle and move on. And today is for settlement. The INEC chairman, Professor Mahmud Yakubu, worried by the threat to peace in the state, had come to solicit his support and he gave his word. We must keep our words.

The monarch now singled out Phillip Shaibu, the deputy governor, for special mention. He believed that Shaibu was the one arming the boys. But when they are through with election what happens to their guns? No answer. He fondly refereed to Shaibu as his boy. But given the way his boy was misbehaving, he said, he had no need for such a boy.

Turning to Oyegun, the Oba reminded him, in case he had forgotten, that he was once a governor. He later became national chairman of APC. He should therefore regard himself as a statesman and remain neutral in this conflict. But he is disappointed that Oyegun has refused to behave like a statesman and chief. Suddenly, the monarch remembered that Oyegun was not even one of his chiefs.  He had a word for everybody. For Governor Obaseki, he said he should remember that this thing ( being governor) is not forever. Four years or eight years and it is over.   But life continues. Why must we kill people? He said he was neutral and urged his chiefs to remain neutral, promising that  he would not spare any chief that gives chieftaincy honour to any of the contenders  for office.

He finally admonished them to remember  the relationship between President Buhari and President Goodluck Jonathan. When the world thought that Nigeria would go up in flames  during the presidential election in 2015, President Jonathan peacefully acknowledged defeat and congratulated Buhari, an unprecedent development in Nigeria.

Pledging peace on behalf of those present,  Obaseki said as governor, he was also the chief security officer of the state and he took an oath to preserve and defend the peace and unity of the country and to secure the lives of the people he governs. He said  he would do nothing to cause violence. But  he promised to present documented cases of violence in the state  to the monarch.

Other concerned stakeholders including Yiaga Africa have mounted anti-violence campaigns, urging all the participants in Edo election to observe the rules of engagement. The police, as usual, have vowed not to spare anybody caught violating the law.

While the rest of the country wait with baited breath, men of peace and goodwill must rally round this exemplary  monarch who, unlike many traditional  rulers in modern times, has refused to be compromised by any  filthy lucre and other crumps from the seat of power which some  less principled minions regard as dividends of partisan politics.