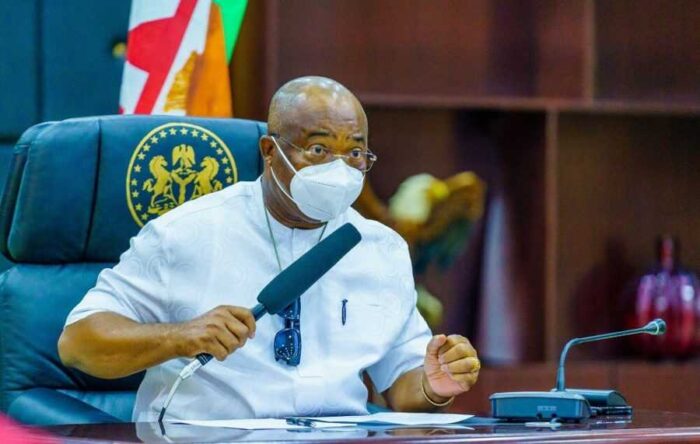 On Tuesday, Imo State governor, Hope Uzodinma, implored the police to use their rifles to defend themselves against members of the Indigenous People of Biafra. Uzodinma spoke against the backdrop of Monday’s attacks on the federal prison and state police command headquarters by yet-to-be-identified criminals. He was with the now-dismissed Inspector General of Police, Mohammed Adamu, who visited the state to assess the damage caused by the twin attack. Uzodinma, understandably embarrassed and self-defensive that such an attack occurred on his watch and a few metres away from the Government House, his official residence, urged the police to defend themselves. That was a rather tactless thing to say in the circumstances.

In January, bandits ambushed some soldiers in Nasarawa State and killed over a dozen of them. Some of the corpses were mutilated too. The governor did not have to enjoin the army to defend themselves. Uzodinma should have taken for granted that the police do not need his instructions on standard operating procedures. As a consequence of the country’s weak institutions, these agents can get away with atrocities their counterparts in societies with robust accountability structures dare not undertake. Nigeria’s security institutions have a record of attacking civilian communities in an outsized bid to revenge supposed insult to their administrative ego. Asking them to defend themselves in the wake of the Monday incident could be an unwitting license of impunity.

The Odi massacre in Bayelsa State and the Zaki-Biam killings in Benue State started similarly: slighted state agents. What followed was the deployment of unknown soldiers to those communities and the subsequent massacre of the people. In 2015, at least 350 Shiites in Kaduna were also massacred because the sect’s members blocked the road that the former Chief of Army Staff, Lt. Gen. Tukur Buratai, was to use. Uzodinma should know that as a result of the incident on Monday, security forces will visit his state and avenge the attacks anyhow. They will carry out reprisal violence to the point that even those out of town on the day the attacks happened will pay for what they did not buy. There are enough antecedents to tell him they do not need his self-defence admonition.

Given how the present federal administration has demonstrated a lot of unease with the secessionist cries of certain elements in the South-East, there is a need for circumspection on everyone’s part. They were the reason the President, Major General Muhammadu Buhari (retd.), while on one of his many medical tours to the UK, once jumped into the plane and returned home. In the past years, the Buhari regime has been so unsettled by the cries of secession from some southeasterners that portions of the states have been militarised. Already, the yet-to-be-identified culprits have been termed “terrorists” by one of Buhari’s garrulous media aides.

Given those factors, Uzodinma’s instinct should have been that of a diplomat. He should have condemned the crime and then advocated a careful investigation to apprehend the perpetrators. The rash manner he proclaimed that the government must “take charge, take control, and ensure discipline” does not make him the quintessential good Nigerian he thinks advocating law and order will do for his image, just an injudicious one. His priority is to the people of the state who will need protection from a potential indiscriminate visitation of violence by an ego-bruised police authority. His duty should be to shield the indigenes of his state from an impending abuse of power. He should ensure they are not subjected to indiscriminate arrest, and those that are arrested should get a fair trial.

There is no justification for what happened on Monday. Everyone should roundly condemn the incidents. However, denouncement of the attacks should be followed by a level-headed approach to ensure that those apprehended and punished are the actual perpetrators. What investigation did Uzodinma carry out within a mere 24 hours of those incidents that he could so magisterially conclude how the police should respond? Those who carried out such a scale of attacks on federal institutions are looking to incite a specific kind of reaction, and official response already suggests they will get their wish. Rather than rhetoric that aggravates the situation, he should gun for de-escalation and amelioration.

Quickly construing the incidents as an attack on government integrity risks turning the outcome into a battle to refurbish the battered ego of Nigeria’s security agencies that have serially failed to put a lid on the spate of restiveness bedevilling the country. He was quoted to have said, “Police must not be compromised so that the integrity of government will remain intact.” Why the hasty link of the attacks on public facilities to the integrity of the Nigerian government? For a while now, bandits have been killing and abducting people all over the country. Has anyone heard the government complain that their integrity is being depleted by the high level of ongoing criminality? Did they bemoan the high rate of insecurity in the country as undermining their previously “intact” integrity? If the diminishing of Nigerian lives does not register as an attack on government integrity, why impetuously characterise this one so? Why wear the fig leaves on behalf of those that ate the forbidden fruit?

There are vital security questions that the Monday incidents threw up, and as the state’s chief security officer, he should join everyone else to look for the answers. First, did the attacks on both the federal prison and state police command headquarters happen concurrently or consecutively? What was the time lapse between when the first attack happened and the other too took place? How long did each take? How long did it take for police officers and security reinforcements to arrive at the scenes of the crime if they ever did? How long should it have taken for them to respond? What did the governor himself do while the attacks were taking place?

The police should address a press conference to clarify what exactly happened in Owerri on Monday. Both the officers at the Owerri police command and the federal prison should be asked to account for what happened on their watch. Where were their trained officers during each of the attacks? Was there any pushback from them at all? Did they repel the perpetrators, or they merely fled from the scenes? Did they apprehend any one of them at all, or all of the assailants got away? They should be able to give some details of how it could happen that a federal correctional facility and regional police headquarters could be successfully sacked on the same day and in the same city. How did those perpetrators breach a whole federal prison and release over 1,800 inmates? What about the security protocol in that place?

It is hard to think that a group of people would attack two separate places on the same day, and there was no forewarning to the police or even the Department of State Service.  Such attacks would have had to be planned for days. The attackers would have had to rehearse their moves and maybe even get insider information that would enable them to invade a federal prison. How could they have carried out all of that planning and execution, and there was no intelligence report to forewarn the police of the attacks? How could their attackers have been able to execute those actions on Monday without meeting significant resistance?

We should not just accept the word of Nigerian security agencies on this matter when they claim to know the perpetrators and then proceed to punish them. They must also account for how such massive attacks blindsided them. There are huge implications to any group successfully attacking federal facilities and getting away with it just like that. It says a lot about the kind of security architecture in the country, and the degree of our collective vulnerability if two separate attacks could be carried out against government security agencies just like that. Something about that situation does not quite sit well. That is why Uzodinma should slow down on charging the police on how to respond and let us get some critical issues out of the way.