Home Columnist Nigerians, please, ‘on your mic’ – By Muiz Banire 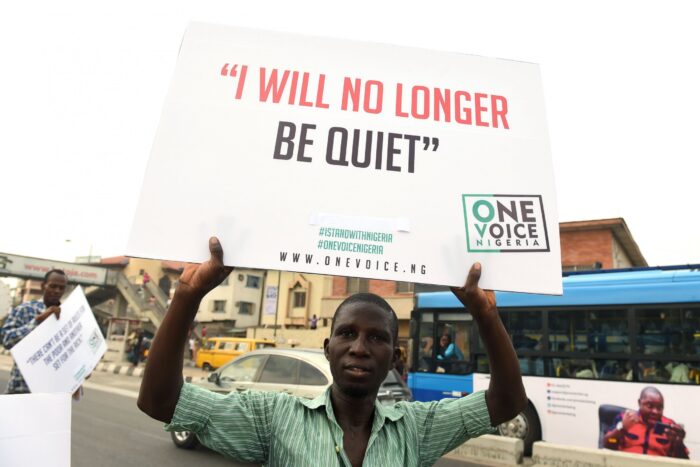 Recently, in the course of the House of Representatives’ probe of the affairs of the Niger Delta Development Commission (NDDC), when the Minister for Niger Delta Affairs, Senator Godswill Akpabio, was being interrogated, he imputed that majority of the contracts awarded in the agency went to the members of the Parliament and was on the verge of disclosing further particulars when the chairman of the panel rudely cut in to stop him intermittently.

Sensing the adamant nature of the minister to continue with the disclosures, the chairman of the probe panel muttered severally by way of cautioning him to skip the aspect by repeatedly saying: “It’s okay! It’s okay!! It’s okay!!!…” At a point, probably out of frustration, the chairman shouted, “Off your mic! Honorable Minister, off your mic!!!” Obviously referring to the microphone by which the minister was loudly spilling information more than desirable to the public that was getting excited by the whole scenario.

That the statements have become a song with great lyrics in the nation is no more news. It is a popular slang now in the country. The import of the pronouncement has been interpreted to mean several connotations. In one breath, it is construed as a warning to the minister to concentrate on the germane issues, while, on the other hand, it is interpreted to imply, “Please, utter no more indicting statements.”

The latter appears to be the perception of the public. The correctness of this import or otherwise does not concern me, as I have a different perception of it in the context of the national polity. How do I mean?

In several of my writeups in the past, I have always said, and I still believe, that Nigerians, by their very nature, are passive in their country’s affairs. They are ever content with everything around them to the extent that all is always okay, notwithstanding their mumblings and grumblings that may suggest otherwise. Starting with the various probe reports and their ultimate end in Nigeria, and as exciting and dramatic as the various probes over time in Nigeria have been, the end product has always been abandonment of the reports to gather dust in some wicked cabinets ultimately. Who gets bothered?

No one. Why? Because it is okay for the reports to rest in peace, if not in pieces, in the cabinets, courtesy of the rodents. A good example is the Steve Oronsanye report on rationalisation of Federal Government parastatals and agencies, which each successive government made efforts to implement since 2011 but never got action due to several interests involved. This is in spite of the fact that huge resources of the nation continue to go into recurrent expenditure as against capital expenditure, the latter of which is supposed to be the catalyst for growth of the nation. Would anything happen? No. It is okay!

When several calls are being made for the change of the service chiefs by all and sundry, particularly the representatives of the people who are victims of insecurity, the Presidency continues to respond by asserting the exclusive power to determine the fate of the officers, which is not in dispute, by retaining them in office. Those whose relatives are victims, and others that are continuously under the danger of banditry, terrorism and kidnapping, Nigerians in general, still do not feel the need to raise their voices against the indiscretion of the executive. This, again, I consider to be a reflection that all is okay with them.

What about the state of the health facilities, which are apparently non-existent? No matter how many people die needless deaths, it is still okay with the masses who are the direct victims of indiscretion in government. In this regard, I salute the courage of a high-ranking public official who honorably owned up to the prostrate state of our health facilities. Prior to that and up till date, beyond cursory observations by a few Nigerians, the majority of Nigerians who are deprived and are victims of the poor health system still do not see any need to react, even at the very least through their votes. They continue to suffer in pain and die in droves without any form of agitation. They take solace in destiny because “it is okay.”

What of the state of our ‘admirable’ road networks in the country? These are permanently famished roads that continue to consume lives. Most roads in the country are best described in the context of an earthquake or products of an aftermath of war. The roads are not only unsafe, ‘uncarworthy’ but totally impassable in some areas. Still, Nigerians continue to be docile, because “it is okay.”

Can someone remind me about the value of our currency today? I learnt it is becoming worthless and beyond redemption. I read an interesting exchange on Twitter wherein Senator Shehu Sani observed that “nobody is noticing that CBN said they spent $3.17 billion within four months defending the naira,” a clown then inquired if the naira was taken to court. Trust Shehu Sani, he responded that it was a tribunal that the naira was taken to.

Exchange rates are still hitting the roof, yet the Central Bank governor continues to dabble into what does not concern him. While it is not bad to mobilise funds for tackling COVID-19, for example, the governor engages himself with project management and delivery at the expense of his statutory functions. I guess this must be to ensure accomplishment of such projects since there appears to be no other credible person in his organisation or elsewhere that can deliver on this. As Shehu Sani observed, the technical devaluation and huge defence sum incurred seem not to injure any Nigerian and it seems to be a thing of pride. To Nigerians, “it is okay.”

How many youths are unemployed today? Statistically, about 23 per cent. These youths enjoy themselves on the social media and the ‘smart ones’ become Hushpuppies or Woodberries. Why not? From the various probes in the nation, nothing has been done to deter the fingered culprits. We are beginning to see that most public officials are hush rottweilers and iron berries and their placement in society justifies the retail fraud being allegedly perpetrated by young fraudsters like Hushpuppi. Rather than agitate the creation and provision of employment for them, the youth enjoy serving as political thugs and ballot box snatchers because their state of unemployment is okay. For how long are we going to be in darkness, thereby endangering not only our security but impairing our growth?
Most industries in Nigeria have virtually shut down and relocated to smaller neighbouring African countries.

Our health suffers from noxious substances due to the fumes of generators while respiratory ailments spread. The ozone layer gets depleted and the weather becomes unstable and unpredictable. Are Nigerians bothered beyond rhetoric? Not really, probably again because “it is okay.” On the education front, our products are not only unemployable but constitute extreme danger to society. I won’t blame them, as the quality of their teachers is equally poor. At the primary and secondary school levels, people become teachers due to absence of other options and not so much because of abundance of knowledge or interest. At the university level, apart from the lack of basic learning infrastructure, lecturers are often distracted by other engagements due to poor conditions of service. At the end of the day, it is garbage in, garbage out. Who is agitating over the issue? Lecturers are on their own and not even the students seem to be bothered. It is certain that “it is okay.”

What of the quality of the elections? This is supposed to be the bedrock of good governance that is sought. Yet, they all continue to agitate on it in their privacy, to the extent that most Nigerians have lost hope in the electoral system and choose to ignore the cycle. No wonder the apathy in the last general election, where only 34 per cent exercised their franchise. This negligible number, mostly the uninformed, determines their leaders for them, as voters generally believe that elections can never be free and fair in this country. Is there anything major that has happened here in terms of mass expression of resistance? No! The reason is because “it is okay.”

I can continue to multiply these iniquities endlessly but it is pointless as the message is simple. The summary of all the above is that Nigerians seem to have resolved to be nonchalant generally, both where it directly touches their interests and where it is remotely related to their future. They impliedly agree that all is okay with them. Nigerians have consented to all the ills above by their conduct, or should I say, as peculiar to them as a people, by body language?
Why should I take paracetamol for somebody else’s headache? They tend to ignore the admonition of the great philosopher, John Stuart Mill, that “all it takes for a nation to decay is for the good people there to keep quiet.”

Let me conclude by saying that, with their docility, Nigerians are loudly announcing by implication their contentment with the state of affairs. My warning is that, should they refuse to have attitudinal change to the issues of the nation through their conspiracy of silence, mostly allowing their voices to go into voicemail when it matters, it is certain that there is no future for the country and their woes may be here to stay for long. In view of all the above, it is safe to conclude that, by their attitudes, Nigerians’ microphones are off already. The message is, therefore, instead of the probe panel chairman’s directive to the minister to ‘off his mic,’ Nigerians need to ‘on their mic’ in order to salvage the nation.