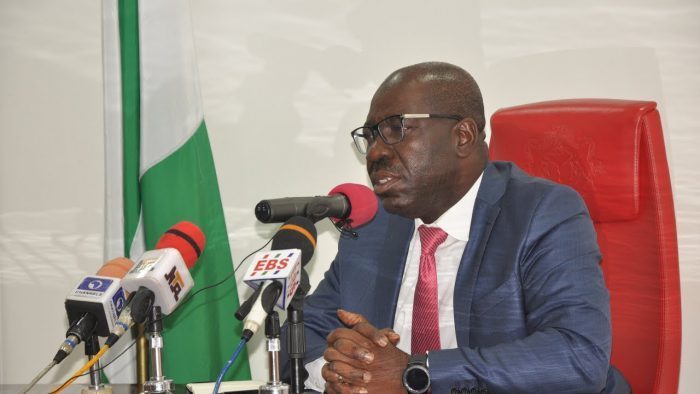 THE Yoruba folk tale reminds one of Godwin Obaseki and his court jesters. It is about a swaggering elephant and the choir behind him. They tickle him with their songs of praise, the drum rolls and the dances. His head dizzy, he feels like deity in the confetti of flattery. The elephant swings right and left forward in slow, majestic strides.

“We are behind you, keep dancing ahead,” they reassure him. As he advances, he is not looking forward but at himself, impressed by the finery of his apparel and the bouquet of applause.

Suddenly, he reaches a precipice and falls over. Before he knows it, there is no more choir, no more drum rolls or applause. All silence. He alone, crestfallen, wounded, comically belly up.

Edo State Governor Obaseki is in such grand deception. He still struts in denial. He thinks he is just. His flatterers and court jesters inflate his pride. The screening committee belongs to Beelzebub. He will meet them, like Caesar, in the Battle of Philippi.

His story is not new in our politics. When Timipre Sylva was governor of Bayelsa State and eyed the second term, he was at odds with President Goodluck Jonathan and his cabal. They did not want Sylva to have a second term. They also deployed the National Working Committee against him, but in a different manner. He could run, but he could not win. They invoked the police, air force, army and navy. It was a farce of force, an onslaught to win a nomination. This column wailed and chided. The journalism world, dead from the neck up, even kept mute in complicity. The PDP did not care about law. They had force and they used it. It is the tyranny of democracy. The system lied against itself. The elephant fell over the precipice. It was a republican carapace covering a stench of dead men’s bones.

In the case of Obaseki, he inflicted his own woes. Why is he blaming the screening committee for lack of fairness? Did the committee ask him to get his name wrong on the NYSC certificate and made no effort to correct it? Did they ask him to make only three credits in his school certificate exam? Or did they ask for the inconsistencies in his university of Ibadan degree? By the way, I thought he attended Edo College, because I saw a picture a few years ago with Nduka Obaigbena – also an old boy of Government College Ughelli – and  Delta State Governor Ifeanyi Okowa. He presented a certificate from Eghosa Anglican Grammar School. Is it also his fault, or that of Adams Oshiomhole, that he lost his certificates and the court registrar could not vouch for any sworn affidavit?

The issues at stake are grave for Obaseki. It is not about APC. It is about the Nigerian constitution. He is expected to present genuine certificates or evidence to INEC and later, if challenged, to the court of law. Happily, the law does not expect him to have a university degree. He is supposed to scale secondary school. He might do that. That will mean he will have to contend with the issue of his NYSC certificate, and pray that the courts will accept that Obasek is the same as Obaseki. The avenging angels of technicality are fluttering above.

It is not a matter of whether he served but whether he served right. The law has its way of defining justice. It may be justice on the streets. It may not be in the vault of law. If Obaseki indeed did well in high school, the law did not see it. If he did well to enter the university and the law did not see it, who will see it? It is not a matter of who is on Obaseki’s side or Adam’s side. It is who the law sees. The constitution prevails. That is the definition of the rule of law. That is why Douri is governor today and not Lyon in Bayelsa State.

If he decides to apply this time through another political party, and does not present his certificates for university and higher school certificate, et al, Obaseki will unwittingly confirm the conclusions of Adams and the screening committee and make them heroes. That will make Obaseki disingenuous and make mockery of his own mockery of the process that disqualified him. If he presents the same papers and affidavit in another party, he will go through the same questioning that gave him the red card in APC. The worst is if he wins in a guber poll and has to go through the courts and meets a Napoleonic waterloo.

Whether he goes to PDP, or SDP or any party, he will have to contend with the same issues that have led his flatterers to cry foul. The matter will not only become a technical goblin for Obaseki but also a moral one. Is he sincere or is he dodgy? The public will face a candidate who will not only answer the lingering question of an ungrateful beneficiary, but whether he told the law the truth or told the public a lie.

So I ask, if he knew he had all these chinks in his armour, why did he go to battle? If you knew you had certificate booby-traps and a big mole in the eye, why dangle the dagger? He had seen this in the same party, in Bayelsa, yet he did not settle in silence. Maybe he thought he had a charmed life. He was following the lines in scripture that says, “Blessed are those whose sins are covered.” His sins were covered once, and he became governor. He ripped it open of his own accord and exposed a leaky sore. He did it when he ordered Adams to seek permission to enter his state, when even a farmer does not need it. He banned gatherings, hectored the opposition, sacked party members, banded with the opposition and supped with Oyegun. He began with a kangaroo legislature. He wanted to be a constitutional emperor. He speaks good English but lacks the polish of his sentences.

He did not learn from Ambode. “To stumble twice against a stone is a proverbial disgrace,” crooned Cicero. He thought he could be king in a democracy. Napoleon’s mother told her son that kings will always remain with us in different guises. Obaseki probably thought he would be Oba Ewuare the Great in the 21st century.

This essayist painstakingly reported how efforts towards reconciliation took place between stakeholders and Obaseki. This included fellow governors, men of means and lawyers. Obaseki would not listen. At a certain time, when all the parties gathered for him in Abuja, he had flown out of town. I made this revelation in this column, but rather than being solemn, Obaseki sent his errand boy after me on this page without addressing the reconciliation efforts I reported. When the fire came, he started seeking the help of those he pooh-poohed, including fellow governors.

If he has a way out, this essayist will wait and see. But the man has shot himself in the foot. He is limping, but he thinks he is dancing.

SAM Amuka turns 85, and we should all raise our glasses. Let the teetotaler fill theirs with brandy, and let the alcoholic fill theirs with soft drink. He is an iroko of news and the written word. Small of size but a walking monument, Amuka’s name rang in my ears when I was a little boy from the lips of my late father Moses. He called him Sad Sam, and he enthused about his capacity to writhe and write. He kept date with his column.

Today, I still look at him with veneration and even more now that I know what he has done for the media, the written word, publishing and democracy. He has a sharp tongue, wry wit and an amiable spirit. His sense of humour is boyish, his smile is supernova and his scolding penetrating. Today he is patron of the profession. We all appreciate him that he continues to look younger than his age. He is also an old boy of Government College Ughelli, and I was told that he was a superb ball juggler and played centre forward as a lethal striker. He carried that arsenal – no gunner intended – to the topsy-turvy world of journalism. Congratulations, Uncle Sam.