Home Columnist Ramadan and the god of Corona – By Yakubu Mohammed 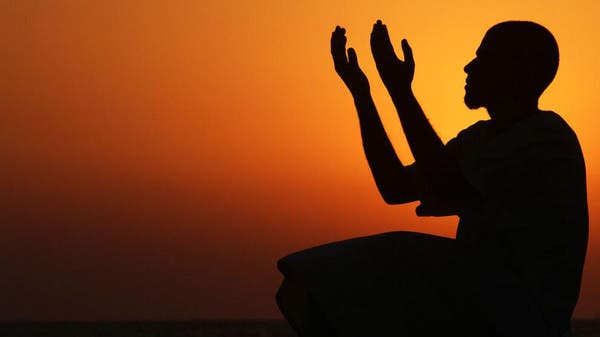 On this page, two weeks ago, I likened the coronavirus, aka Covid-19, to a jealous, vicious and unappeasable god that seeks to redefine the way we do things including the way we worship  the only authentic and merciful God by decreeing its own commandments and establishing its own protocols of worship.

I drew attention to some of its evil commandments, one of which is thou shall not worship in congregation as enjoined by God. For emphasis, this commandment forbids that you assemble in the mosques or in the churches to promote brotherhood and fellowship while serving your God.

As a reminder, and using the mantra of lockdown, it also forbids that you should go out there, till the soil or engage in other lawful businesses and fend for yourself. Globally, it has decreed a lock down and since February or March this year, it has held the whole world captive.

All citizens of the world, without exception, have been forced to comply, and do so to the extent that there have been no church services during the period under review. No Jummat prayers for the Muslim faithful. No lesser hajj, otherwise called Umrah, to the Holy Mosque, the Ka’aba in Makkah. In fact, the two holy mosques have been locked down with the suspension of Umrah with a huge question mark on this year’s annual holy pilgrimage.

As an earnest of its “good intentions” or its seeming fair mindedness, this audaciously foul minded god has equally shut down the St Peter’s Basilica in Rome. In other words, you cannot accuse him of bias in favour of any particular religion. And in case you may wish to put on him the tag of clannishness or nepotism, it makes it clear that its actions have been anchored on scrupulous balance and neutrality.

Whatever humanity has done so far to appease it seems to have made no dent on its feelings. And so whenever it coughs or sneezes, the world quakes. Fatality figures as at the time of writing are in the region of 165,924 world-wide. And the World Health Organization, WHO, is still counting the number of casualties while top scientists all over the globe are scratching their heads to find a way to end this evil affliction.

But until then it would not stop exacting its pound of flesh not only on lives but on the way humanity conducts its daily life. That includes its mode of worship  –  the Christians, in their multitudes, trooping to their churches as and when their spirituality demands and the Muslims congregating to offer their obligatory prayers as they are wont to do.

Two days from now will be Ramadan and the one month long fast will commence.  I fear that the faith and the patience of the global community of Muslims will be called to question. It is going to be Ramadan with a remarkable difference.

For the first time in living memory they will be observing the fast without the rituals and the ceremonies that make the period something to look forward to. There will be no Taraweeh prayers, the gathering in the night to offer prayers to Allah. And when it is iftar time, there will be no gathering in the evening in the mosques for the rich and the poor to mingle and break their fasts, symbolic of the fact that before God, all of them are equal. 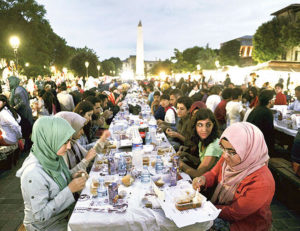 Muslims having Iftar together (before coronavirus pandemic)

All this, thanks or no thanks to the god of the coronavirus with its lockdown regulations, restriction on movement and travel ban, to say nothing about social distancing.

But does this omission diminish the practice of Islam? Without the Taraweeh prayers in congregation, is the fast not an acceptable fast? And if you don’t perform Umrah, does that make you less committed a Muslim?

No, say the numerous scholars who have quoted the Hadith and other relevant authorities to back their claims that all these omissions do not diminish the practice of Islam. In fact, some of them think God is at work putting the entire world in a reset mode for good, returning Islam to its pristine, simple ways.

Truth is many Muslims will feel justifiably horrified  that in their life-time, they are going to observe the fast without all these rituals. But some learned scholars have reasoned that indeed in the time of the Holy Prophet (Peace and blessings of Allah be on him),  he and his companions did not observe the Taraweeh prayers. They said their Ishai prayers and went back to their respective homes to say other prayers ( Taraweeh or Tahajjud) alone or with their families. In the early days of Islam, there was no abundance of food to turn the breaking of fast into a feast as is the current practice in many Islamic communities.

Yes, Islam encourages simplicity and it encourages sharing. Despite the lockdown, the less materially endowed Muslims can still be assisted to fast without the fanfare of open charity. So, as they say, nothing spoilt in the coming Ramadan. It is the duty of every Muslim, therefore, to accept the current situation as the will of Allah, something ordained to test our faith.

And this takes us back to the lockdown and all the rituals of the Corona god.  Evil minded as it may appear to be, this Corona god is also carrying out the injunctions of Almighty God though crudely forcing it down our throat as if it is a bitter pill.

Yes. The lockdown certainly looks like a bitter pill to swallow, though it is absolutely in our own interest to do so. For now, it is the only significant way to escape the dreaded virus. Though the body rejects forceful isolation as if one is under house arrest, Islam does not find it offensive. Lockdown is sanctioned by the Hadith which says: “Those who stay at home to protect themselves and to protect others are under the protection of Allah” as reported by Musmad Ahned Saheeh.  As for praying at home instead of gathering in the mosque, the prophet, according to Tirmidh( al- Salaah, 291), said “ The entire earth has been made a Masjid, except graveyards and washrooms.”

The practice and sayings of the Holy Prophet have made ample provisions for the Muslim community in times of epidemic or pandemic which enjoin people to stay at home, stay where they are, not to escape from affected places and not to allow people to come to the affected places – prophetic or even commonsensical provisions even ahead of science and modern medicine.

I am willing to concede that the social and economic pains of lockdown are painful. The pain and the induced hunger  make many people to break the lock down as if they are in confrontation with the law. They are not. It is hunger that is driving them back on the street.

But for many more people, the underlying factor that is responsible for their predilection for death is ignorance and unbridled fatalism.  There are still  a whole lot of people especially in the rural areas who have sworn that there is nothing like the pandemic.

More sensitization to generate awareness will help to bring the reality of the pandemic home. But the   authorities should go beyond the palliatives which don’t even work well in some places to see how they can revise and review  the lockdown from time to time so that the envisaged cure does not become more harmful than the disease.

For the Muslim ummah I say Ramadan Kareem. Despite the furious spread of the Coronavirus and its evil machinations against humanity, this Ramadan may turn out to be the best yet.