Home Columnist Our leader, Nnamdi Kanu is not dead – IPOB 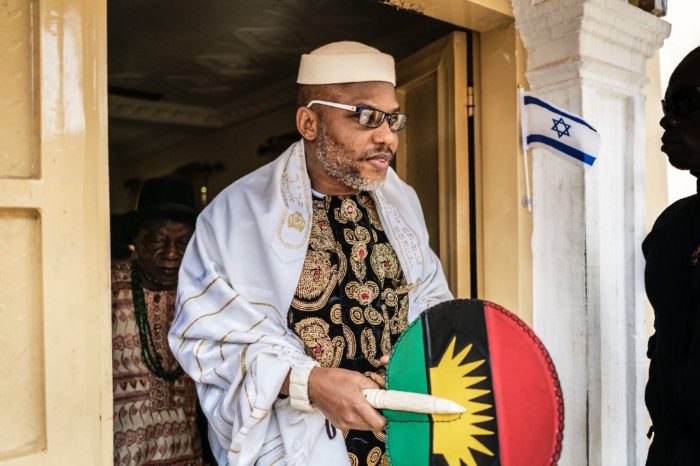 The Indigenous People of Biafra, IPOB, yesterday described the allegation by a social media personality, Kemi Omololu-Olunloyo, that its leader Mazi Nnamdi Kanu, is dead as the height of deceit, cocktail of madness and irresponsible social media practice. IPOB also said that the likes of Kemi Omololu-Olunloyo are the people that are bringing bad name to Social media and should be ignored and not to be taken serious because nothing good will come from her and her outfit.

In a statement by IPOB’s Media and Publicity Emma Powerful, the pro Biafra group said it would not have ordinarily join issues with the the social media personality, because she is a roadside service provider to gullible people that want to use the name of IPOB and its leader Mazi Nnamdi Kanu, to get rich and be relevant, but to tell the world for the last time that it will not respond to allegations of people like Olunloye who think that the only way to get rich and relevant is conniving with the cabal in Aso Rock to destroy the name of leader, and wishing him death.

“We are aware that she has collected money from the Nigerian Federal Government like her likes have been doing to tarnish the image of IPOB and Mazi Nnamdi Kanu and is therefore doing everything possible to justify her pay, as well as be relevant to her pay masters, the current administration she is working for in Nigeria.

We are telling the lovers of IPOB, Mazi Kanu that this is the last time we ill respond to any fake information coming from Kemi Omololu-Olunloyo, because it a waste of our previous time and that of our members and lovers.

“Our God ordained leader, the prophet of our time Mazi Nnamdi Kanu is hale and hearty and too busy with issues of Biafra and international community, the world will be convince with his oncoming radio broadcast to continue to expose the rot in Nigeria and the lies and irresponsible social medial journalist of Olunloyo to grave.

IPOB’s statement further read; “The great family of IPOB does to respond to every roadside service provider and those looking forward to use it’s movement and revered name of our leader Mazi Nnamdi Kanu to attract relevance from government.

“Our great leader Mazi Nnamdi Kanu is alive, hale and hearty, nothing happened to him, God so created him in such a way that he hardly get sick, because the work he is doing to liberate the oppressed and maltreated mankind is equally ordained by God, so nothing happened to him and nothing bad will ever happened to him, he cannot descend so low as to responding to irresponsible and deceptive social media rat, e-rat, let alone a person like Olunloyo. “We do not know why gullible and confused Nigerians still believe that our leader Mazi Nnamdi Kanu is dead. Anybody doubting should listening to his numerous broadcast on radio Biafra and the oncoming ones.

“We are warning those involving themselves into such moves and wishing our leader death to retrace their steps before it becomes their lot, we also want to remind them that the time of reckoning is fast approaching.

IPOB is not ready to give such chances to people who want to use its name or that of our indomitable, indefatigable, honest, consistently consistent, courageous, down to earth and ever ready to stake anything to liberate Biafrans, to gain relevant from anywhere, anybody and any irresponsible .government.

“We are in the know that some people in Nigeria thought they can get relevance from attacking IPOB and our able leader Mazi Nnamdi Kanu, we however asked to to rather focus on the ills of the governments paying them to make responsible, responsive and committed to the people need and not to look tarnish the image of IPOB and its leader which is an possible task and will never be possible to achieve.

“This is the last time we will dwell on the irresponsible, 55 years old woman social media rat, over the life of our leader, those who wants to further believe her should go on but we assure you that our leader is not bothered about their lies over his life because is only God, Chukwu Okike Abiama, that gives life and has continued to keep and him to do what he is doing and will not stop doing until Biafrans are liberated.”