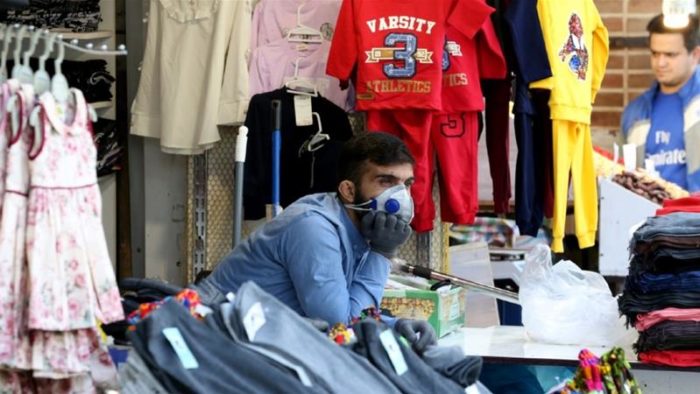 Iran has allowed some businesses in Tehran to reopen as the country’s daily death toll from the new coronavirus fell to 73, its lowest in more than a month.

So-called “low-risk businesses” including many shops, factories and warehouses resumed operations in the capital on Saturday, a week after reopening in the rest of the country, state television reported.

However, the move was welcomed with scepticism by some among the public who preferred to remain home leaving most shops in northern Tehran and the city centre empty.

Although compared with recent weeks there was greater activity in the streets, few people were using public transport. Most in the city complied with the government’s emphatic call to maintain social distancing including on public transport.

“I was worried about public transport so I took my own car,” supermarket manager Manijeh H told DPA news agency.

She decided not to take a taxi, as they are expensive and she was also afraid of becoming infected.

The day was not particularly profitable for taxi drivers and minibuses in the city, despite the reopening of businesses, and most remained parked at stands without any customers.

Store owners too complained of the lack of shoppers. “If no one can go out, then no one is going to buy new clothes and shoes. Opening my shop isn’t helping me much,” Navid S, who owns a boutique in the northern Tajrish Bazaar, told DPA. “At home, people are just running around in old T-shirts and tracksuits.”

Many members of the public who did venture outside wore face masks and plastic gloves.

The reopening, announced earlier this month, came as official figures showed daily deaths from the new coronavirus fell to 73 on Saturday, the lowest since March 12.

That brought the total death toll to 5,031, health ministry spokesman Kianush Jahanpour said. Saturday marked the fifth consecutive day with a death toll under 100 in Iran, one of the worst-hit countries in the Middle East.

A parliamentary report released earlier this week, however, suggested the coronavirus death toll might be almost double the figure announced by the health ministry, and the number of infections eight to 10 times more.

There was some heavy traffic in Tehran on Saturday and people applying for state support crowded some offices, drawing warnings from officials about a resurgence of the virus.

“The coronavirus is still in an epidemic stage in Tehran … and the heavy traffic is a cause of increased concern,” state media quoted Alireza Zali, head of the government-run coronavirus taskforce in the capital, as saying.

Gyms, restaurants and shopping malls will remain closed. Shrines and mosques are shuttered, as well as schools and universities, and a ban on public gatherings remains in place.

Many government offices have reopened with a third of employees working from home. However, social distancing measures were not upheld in some offices, leading to furious protests by officials and members of the public visiting the offices, the Associated Press news agency reported.

Iran’s President Hassan Rouhani defended the government’s decision to ease restrictions, saying the country needs to find a balance between protecting its people’s health and keeping the economy moving.

When the country reported its first coronavirus case in February, it was already facing an economic crisis, amid tough United States sanctions that were reimposed in 2018 after the US withdrew from Tehran’s nuclear deal with world powers.

The World Bank said Iran’s gross domestic product (GDP) contracted by 8.7 percent in 2019 compared with the previous year, while the International Monetary Fund (IMF) has forecasted a 6 percent drop in the GDP in 2020.

The country’s lockdown is to be lifted in three phases, with the easing of restrictions in Tehran the second, after shops deemed low risk were reopened in the provinces.

The government has said the timing of the third phase, under which schools, universities and remaining businesses would reopen and sport competitions would restart, depends on the success of the first two phases.