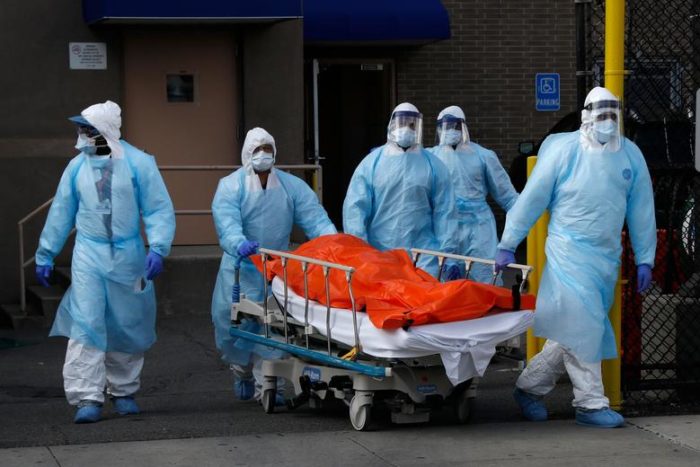 Each day, news of more deaths is a huge source of alarm to people across the country – as well as a tragedy for the families involved.

Projections of how bad the outbreak could get have prompted ministers to put the country into lockdown. But what are death figures really telling us? And how bad is it going to get?

The death figures being reported daily are hospital cases where a person dies with the coronavirus infection in their body – because it is a notifiable disease cases have to be reported.

But what the figures do not tell us is to what extent the virus is causing the death.

It could be the major cause, a contributory factor or simply present when they are dying of something else.

Most people who die with coronavirus have an underlying health condition, such as heart disease or diabetes, that may be more of a factor.

For example, an 18-year-old in Coventry tested positive for coronavirus the day before he died and was reported as its youngest victim at the time.

But the hospital subsequently released a statement saying his death had been due to a separate “significant” health condition and not connected to the virus.

There are, however, other cases, including health workers and a 13-year-old boy from London, who died with no known health conditions.

The Office for National Statistics is now trying to determine the proportion of these deaths that are caused specifically by coronavirus.

How many could die? 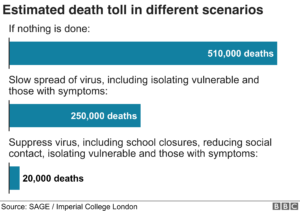 Imperial College London modelling, used to inform government, has suggested 500,000 could have died by August in the UK if the virus was left to rip through the population.

It also warned the government’s previous strategy to slow the spread by asking those with symptoms to self-isolate and shield the most vulnerable could have led to 250,000 deaths.

But that does not mean 480,000 lives are being saved – many will die whether or not they get the virus.

Every year, about 600,000 people in the UK die. And the frail and elderly are most at risk, just as they are if they have coronavirus.

Nearly 10% of people aged over 80 will die in the next year, Prof Sir David Spiegelhalter, at the University of Cambridge, points out, and the risk of them dying if infected with coronavirus is almost exactly the same. 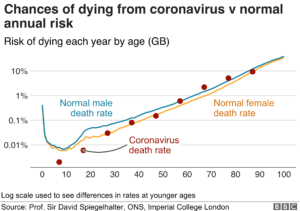 “Many people who die of Covid [the disease caused by coronavirus] would have died anyway within a short period,” he says.

Knowing exactly how many is impossible to tell at this stage.

Prof Neil Ferguson, the lead modeller at Imperial College London, has suggested it could be up to two-thirds.

But while deaths without the virus would be spread over the course of a year, those with the virus could come quickly and overwhelm the health service.

How effective is the lockdown?

The most immediate way to judge the current policy is to see if the health service manages to cope with the coronavirus cases it sees in the coming weeks.

Beyond that, the key measure will be what is called excess deaths – the difference between the expected number of deaths and actual deaths.

This is closely monitored during flu seasons. During recent winters, there have been about 17,000 excess deaths from flu a year, Public Health England says. 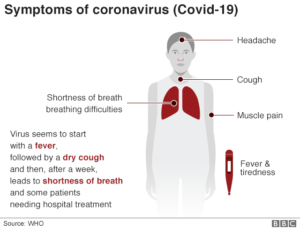 This, of course, can be done in the future only. But researchers at University College London have been trying to model it in advance.

If coronavirus turns out to be no more deadly than flu, the lockdown could limit the number of excess deaths to under 1,400 – more than 12,000 fewer than would have happened under the previous strategy of slowing its spread, before the decision was taken to move to lockdown.

If it turns out to be five times more deadly than flu, the lockdown could limit coronavirus to 6,900 extra deaths – more than 60,000 fewer than under the previous strategy.

What about the impact of the lockdown?

The lockdown, itself, however could cost lives.

Prof Robert Dinwall, from Nottingham Trent University, says “the collateral damage to society and the economy” could include:

Others have also pointed to the health cost from steps such as delaying routine operations and cancer screening.

Meanwhile, University of Bristol researchers say the benefit of a long-term lockdown in reducing premature deaths could be outweighed by the lost life expectancy from a prolonged economic dip.

And the tipping point, they say, is a 6.4% decline in the size of the economy – on a par with what happened following the 2008 financial crash.

It would see a loss of three months of life on average across the population because of factors from declining living standards to poorer health care.

What will happen next?

The policies in place at the moment are aimed at suppressing the peak by stopping the spread of the virus.

Once the peak has passed, decisions will have to be taken about what to do next.

The virus will not simply have gone away and with a vaccine at least a year away, the challenge will be how to manage the virus.

A balance will need to be struck between keeping it at bay and trying to control its spread to avoid a second peak, while allowing the country to return to normal.

Seeing the full picture in terms of lives saved and lives lost will be essential in getting those calls right.