Home Columnist China takes on the world – By Yakubu Mohammed 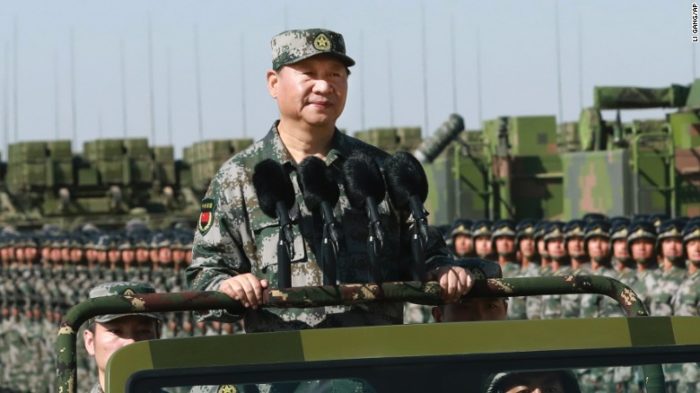 The only thing that can effectively compete with the Corona or Covid-19 virus in terms of speed and exponential spread round the world is the accompanying conspiracy theories. In their various combinations, these conspiracy theories which seek to question the origin and the true bona fide of this deadly coronavirus, have continued to mutate with fire and fury.

And like the coronavirus itself, there is no cure in sight or even a vaccine to stem the tide – because there does not seem to be one truth about the origin and the true identity of the virus. There are as many truths as there are many fallacies depending on who is doing the telling and who is doing the hearing.

And they all conspire, in these grand conspiracy theories, to confound and confuse the uninitiated especially those of us in this part of the world.

It is no wonder, therefore that intuitively, the exasperated man on the street, faced by the adversity of lockdown, says that there is nothing like Coronavirus. And, therefore, there is no justification, he says, to put him under lock and key. This man may not be echoing anybody. And he is not even in the position to read the volumes of conspiracy theories being spewed out daily in the ubiquitous social media.  For the man on the street, it just comes to him naturally as a reaction to the vicissitude of life that his peculiar station has sentenced him.

He has been confined to house arrest to observe social distancing where there is no room even to swing a cat; to stay off the street where he ekes out a miserable living and to wash his hands and sanitize them even when the tap does not run in his house.

It comes out of his mouth naturally – there is no virus called Coronavirus or COVID 19.

For sure, this man about town is not an agent of the numerous conspiracy theories spreading like coronavirus. But, without knowing, he has echoed one of the theories which holds that the coronavirus was an experiment that went awry in a Chinese laboratory or the product of the 5G technology. Or, to go back a little in time, the depopulation agenda of the USA put together by Dr Henry Kissinger and targeted at poor countries.

According to one of the narratives, the Chinese authorities, in the efforts to bring  down the street protests in Hong Kong late last year, came up with the manufacture of some biological gas that could be sprayed by helicopters or the drones to make the protesters docile and obedient and, willy-nilly,  to  call off their protest.

But according to this theory, the Chinese had a change of heart when they discovered the debilitating effects of this biological agent after testing it on some hapless human guinea pigs. But, so says the theory, the CIA took interest in the project and wanted to be part of it. The suspicious Chinese authorities demurred.  But a black leg in the Chinese hierarchy stole a vial of the lethal gas and was to hand it over to the CIA in Hupei, the sea food market town near Wuhan. 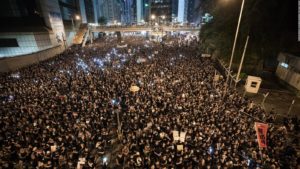 HONG KONG, CHINA – 2019/06/16: pro-democracy protesters marched through the streets of Hong Kong during the mass rally, which called for, among other demands, the withdrawal of the controversial extradition bill 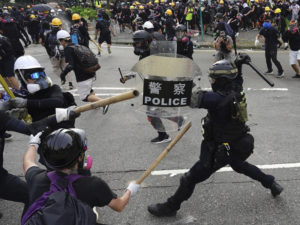 The protest turned violent. The Chinese government had to act fast

The ensuing struggle to take control of the agent led to an unpublicized shoot-out involving a Chinese agent and the CIA and the lethal biological agent shattered and spread its toxic virus which infected people.

Since December month was the time of year when Chinese flu was always rampant but with little or no death, doctors mistook the lethal effect of the leaked virus to be the usual coronavirus. Some of those who knew about it, escaped the country to avoid the lockdown that followed as part of the efforts to stem it. The escapees became the willing agents of the across border transmission that has taken the world by storm which may account for Donald Trump’s insistence that this was a Chinese virus. And that is why the man on the street in Lagos, totally oblivious of this conspiracy theory, could say loudly in protest that there was nothing like coronavirus.

But the Chinese have their own version of the conspiracy theory. It was the Americans, they swear, who, to control the Taliban in Afghanistan, embarked on the production of a deadly nerve gas. But the experiment went wildly off mark and at least 67 American soldiers were reportedly infected. But to cover up their eventual death, the 67 sick soldiers were sent to Wuhan, an industrial city, in China to participate in a military parade. And when the infection from Afghanistan took effect and they died, the Americans had a cover and an alibi for their death: China virus. Trump, the other day, made an oblique reference to the Chinese accusation that it was the Americans that brought the virus to China and through China to the rest of the world.

Clearly what is at a play is the fight of two elephants in which the proverbial grass is their unfortunate victim. Torn between the two super- powers and their various allies, the poor Third World countries can only wonder what has hit them and pray to escape the fury of the coronavirus – natural or man-made.

Naturally, the social media, not the mainstream media for obvious reasons, is awash with all these theories. But if the culpability of China is in doubt, they wonder, how come that it quickly brought the virus to its knees and recovered quickly enough to get back to business.  How come, they ask, their industries are getting back to business when the virus they gratuitously exported to other countries is tearing to pieces the fabrics of nation states, world-wide.

In the supremacy battle with Trump’s USA, China today clearly has the upper hand.

The priority of the rest of the world from Europe to Africa and the rest of Asia is how to survive the Corona virus tsunami, not how to keep their economy in a dominant position. While the rest of the world is battling to save lives by halting the spread of the virus, the Chinese are laughing to the banks.  Wuhan factories are up and running again with trains doing mass movement of commuters. Instead of social distancing, they are hugging and clapping, celebrating a clear victory over the rest of the world.

To be fair to China, other big businesses like Germany’s BMW, shut down at home, have resumed production in China.

China is not bordered about any conspiracy theory. Instead, the country is focused. Its singular ambition, it is clear, is to take the driving seat of the world economy.  It will be a miracle if that country does not surpass itself when the next count is taken.

With the coronavirus thrown into the equation, it stands to reason that for now there is no stopping China. The rest of the world looks up to it for anti- coronavirus equipment ranging from hand gloves, sanitizers face masks to ventilators. While the rest of the sick world is helpless, China’s revenue from other people’s misfortune will be in trillions of dollars.

China has admitted that it cannot stand up to the USA in a shooting war. But in the titanic battle for economic supremacy, China is determined, by fire and by force, to use a popular slang, to overthrow the USA and other world powers.

You are free to engage in as many conspiracy theories as your innate capacity would allow. But what is certain today is that China is the only country that can sneeze or cough and the rest of the world would catch cold.