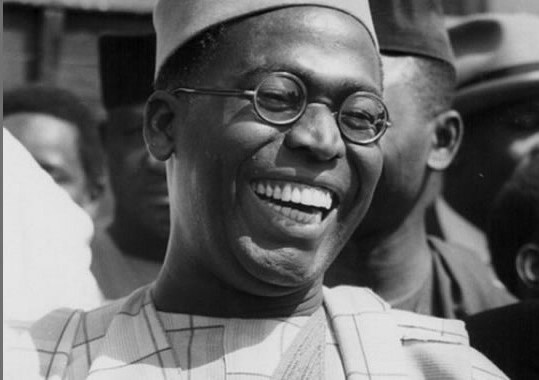 On Wednesday morning, as I contemplated my choice of topic for today, my friend called. This time he was a serious thinker, the complete opposite of the joker image that he almost always presented. He wanted to congratulate me in advance of the birthday of my son, Ademola, which comes up today.

Of course, Opalaba didn’t forget. He was there with my father on the eighth day naming ceremony in panic mode awaiting my arrival from Ife, while my wife, fully engaged by the baby, put her faith in God. I arrived late because I had a morning class that I couldn’t afford to skip. I thanked my friend for the memories. And I thank God for my son’s achievements over the years and for his successes.

Then, announcing himself as “your aide-memoire this week”, as if I needed one, my friend, with excitement, also reminded me that my son and our idol share a birthday.  “Remember the avatar himself has his 111th posthumous birthday coming up on Friday? That’s a significant number”, my friend added. “Sure, I replied enthusiastically. Too bad Baba left us as orphans before we reached the age of maturity.” “Too bad”, Opalaba intoned, and I could feel the sadness gushing out from the receiver.

“Oh, and there is another birthday this week”, my friend announced as he overcame his emotion. “Oh yeah? Whose?” I asked. “The other Baba of course! Don’t tell me you don’t know that General Obasanjo turns 83 on Thursday.” “Oh, how nice! I wish the other Baba many happy returns”, I replied.

“That doesn’t sound enthusiastic”, Opalaba challenged me. “We should give the old man a break. After all, he is now all over the place preaching the gospel of true federalism which Chief Awolowo preached and acted upon his entire life, and for which he was vilified by Obasanjo and others. I see his new role as that of a repentant unitarist now in league with true federalists. What else do you want?”

“I am glad that you accept that he was a uniformist before he is a federalist, and that he was against restructuring before he was for it. I like a consistent federalist better. I like better those who don’t shy away from what they know is right no matter what the consequence is. I like those with unshaken principles even when they understood it would cost them their life-time ambition. By gosh, I like better the one who paid the price of principled consistency when others conspired against him.”

Opalaba was silent, a signal that he wanted me to continue.

“Look at it this way,” I requested. The British colonizers of Nigeria were unitarists. They preferred to rule Nigeria as a unitary system. Awolowo confronted them with a thoughtful position that objectively analyzed the fact that Nigeria is a conglomeration of diverse nationalities; and as such, federalism is the best approach to its governance. He never abandoned this position even when he was its only advocate. So-called nationalists mocked him as a tribalist. Later, they all came back to embrace his position.

“But who were the “basejes” and spoilers that destroyed the federal structure? It was the military government starting in January 1966. If we concede that due to its hierarchical system of authority, military governors had to take orders from their superiors at the center, what they did was understandable. But it shouldn’t excuse their imposing the same system on the civilian administration on the eve of their (military) return to the barracks in 1979. But that was what they did.

“Again, however, the civilian administration that took over in 1979 had every responsibility to review the constitution that the military handed over to them. They didn’t. Instead they took it, and advanced it with the introduction of Presidential Liaison Officers which institutionalized federal presence in the states. And, of course, the military returned with a vengeance in 1984.

“Fast forward to 1999, and another unitary constitution was imposed on the country. This time, the beneficiary was General Obasanjo who gladly ran with it with a heavy hand. Remember Odi. Remember the impeachments of Ladoja, Fayose, Dariye, and Alamieyeseigha. And the emergency declarations. Remember the shoot at sight order on OPC. And please recall the hounding of late Dr. Fasehun, the leader of the organization.

“If you effectively wielded the weapon of unitarism for eight years and you didn’t see anything wrong with it, I have the right, and indeed, the duty, to be skeptical of your new gospel of federalism and restructuring.

“Let us assume that the stress of office and the commitment to get things done for the country may have clouded the vision of the former president. But ten years after his presidency in February 2017, he mercilessly mocked Jonathan’s national conference as a distraction and proudly confessed that he did not read the report. Then, in January 2018, we began to see a shift in outlook. From seeing those who sought restructuring as greedy politicians, he now sees risks of division without renegotiation of the country’s unity and listening to the complaints of ethnic nationalities.

“In his March 1 address at the first memorial lecture in honor of Dr. Frederick Fasehun, the former president recalled that true federalism was the agitation when he was in power but that it has now morphed to restructuring, and he advised President Buhari not to let the agitation advance to self-determination struggle. It was a good advice. What I didn’t see from media reports was a sense of regret, if not apology, to Nigerians for why he didn’t accede to the demand for a true federal system when he had the power of say so.

“That takes me to the question of the difference, if any, between true federalism and restructuring. This is important to clarify because many have mischievously dismissed the demand for restructuring on the ground that it’s a vague concept, or that the agitators don’t really know what they want, or that there are varieties of views on the matter and, therefore, the demand lacks merit.

“Simply put, one is a means to the other. The goal is true federalism. The demand is for the political system of the country to be restructured from its present unitary slant to a true federal structure. We wouldn’t need restructuring if we had not deviated from the original federal structure at independence.

“As Professor Ladipo Adamolekun reminds us in an insightful article for Publius in 2005, the first phase of Nigerian post-independence system was “an apprenticeship to true federalism phase (1954-65)”. This was followed by a “federal dominance phase under military rule (1966-79 and 1984-1999)” and “a muddling through phase under civilian rule (1979-83 and 1999 to date).” Even though Adamolekun characterized the first phase as an apprenticeship phase, it was very clear that the country and its leaders were good apprentices who quickly learned the trick of the trade to the benefit of the nation.

“The true federalism phase was “characterised by political devolution and intergovernmental competition, during which regional governments recorded tangible results.” This is the result that every advocate of restructuring of our present unitary or “muddling through” system has been urging: tangible results.

“What is vague about this? It was a time when regional governments paid workers salaries without approaching the federal government cap in hand. It was a time when internal security was handled effectively. It was a time when development projects beautified the landscape of various regions and local communities. What we have now is “military federalism” which once catered for the need of the military, but which civilian administrations since 1999 have shamelessly adopted.

“Some might think that it serves their personal or section interests to keep military federalism as the governing philosophy of the country. What is clear, however, is that it will not endure. Hopefully, the Constitution Review Committee of NASS sees the big picture as Awolowo and the Founding Fathers did. Whether it can act in the interest of the nation as Awolowo did is a different matter.