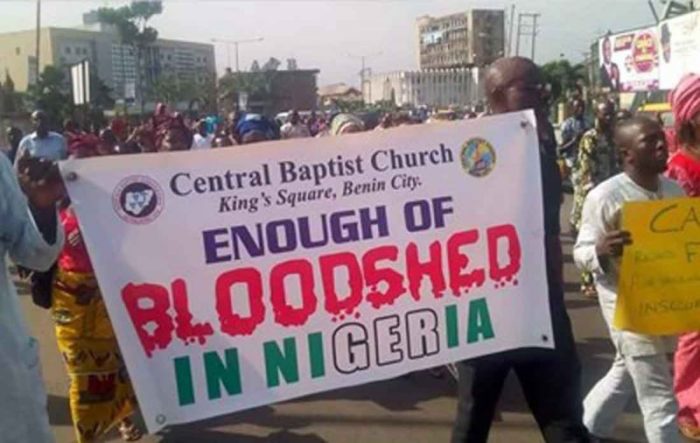 Nigerians protesting the bloodshed in the country

As an association, the Catholic Bishops Conference of Nigeria (CBCN) has proved its consistency and staying power in its decades-old interventions in Nigerian affairs. The bishops are unlikely to change. Their exposure, depth and training will cause them to constantly speak out against evil and creeping anarchy. They have often spoken out against oppression in Nigeria, and against leaders who do not measure up; so, nothing will deter them now from speaking out with the vehemence and candour associated with their style. In a statement to mark Ash Wednesday, the CBCN denounced what they saw as the federal government’s duplicity in tackling killings perpetrated by Boko Haram and herdsmen. If the killings are not checked, they warned, they could spell disaster for Nigeria and the continent.

Here is an excerpt from their statement: “The level of insecurity in Nigeria today is such that whether at home or on the road, most Nigerians, in all the parts of the country, live in fear. The repeated barbaric execution of Christians by the Boko Haram insurgents and the incessant cases of kidnapping for ransom linked to the same group and other terrorists have traumatised many citizens. That the perpetrators of these heinous crimes make public shows of them on social media, and Nigerians do not hear of any arrest or prosecution of the criminals, raise grave questions about the ability and willingness of the government to protect the lives of the ordinary Nigerians. To make matters worse, many communities are constantly threatened, harassed and sometimes even sacked by herdsmen, as they seek to take over more territories to graze their cattle forcefully…We equally appeal to the international community to come to the aid of the Nigerian government in the fight against these daredevil terrorists, who want to graze our country. The consequences, should they succeed, will be grave not only for the West African sub-region but also for Africa as a whole.”

The federal government has defended its efforts to stanch the flow of blood let loose by Boko Haram insurgents, but they have waffled considerably in their response to killings by herders, much of it evidently ethnic cleansing rather than retaliatory. But neither the government’s fight against Boko Haram nor its puny actions against herdsmen has been either meaningful or exemplary. Boko Haram, despite the government’s best claims, has persisted in its bloodthirstiness and appears to be metastasizing, sometimes morphing dangerously to other forms of ubiquitous low-scale wars and terrorist attacks. There has been very little effort made to understand the driving force of the insurgency, or design the effective tactics needed to combat it. There is no attempt to understand its beginnings, its roots, and the injustices and socio-economic contradictions that suffused the  communities in the Northeast that gave birth to it. Even the extra-judicial murder of Boko Haram’s founders has  not been properly prosecuted after more than 10 years. And as the Catholic bishops asserted last week, the government has made little effort to address the religious basis of Boko Haram, not to talk of finding and dealing with the nexus between Boko Haram’s religious extremism and the continuing religious biases exhibited in many states in the North.

But nothing demonstrates the federal government’s impotence, say the bishops, as its pussyfooting over the killings perpetrated by herdsmen. First the government did not know what to do, then when it responded, the response came late. And though the response came late, the government managed to compound the problem by issuing mendacious and provocative responses, some so contradictory and illogical that they betrayed underlying and fundamental fissures and biases as well as betray a befuddling appreciation of the concepts of Nigeria and the Nigerian. Responding to mindless killings by herders, the government first proceeded from the point of the need by host communities to live amicably with their attackers; then on to questioning the Nigeriannness of the attackers, presuming them to be foreigners; then moving on to propounding measures and policies to expiate the killings through land surrender; and finally turning a blind eye to the ethnic cleansing perpetrated by herdsmen which have pockmarked many northern communities. The federal government at no time proceeded from the point of genuine outrage over the killings authored by herdsmen, beyond issuing bland and empty condolences and promises to arrest the attackers and prosecute them. The killings have thus continued almost without let or hindrance.

When the bishops addressed the killings, they were not just asking the federal government to do something about the insurgents or herdsmen, as appropriate as that would be; they were in fact asking the government to re-examine their raison d’etre, to establish whether they are in fact a government at all, whether they have a modicum of understanding that they must eschew ethnic or religious biases in their policies and actions, and whether they have the right understanding of what it means to be a Nigerian or to be harshly judged by posterity. The government may be hard of hearing and inured to the accusations of the people, but the consensus in most parts of the country, whether by the afflicted who have received no succour or understanding from the government, or by the empathetic who fear a future implosion, is that the government is in fact not a people’s government anchored on the right principles and national values of unity, cohesion, peace, development and stability. The bishops spoke eloquently, not about their religion, but about the absence of the values that define and unify humanity, and should define Nigeria now and for all time.

In their remonstrance, the bishops also spoke indirectly but no less eloquently about the failure of leadership in Nigeria. They have hinted this point at different times and in many fora. They didn’t say it, but they know that no matter how stridently they shout, they will not get an answer to the many puzzles raised in their statement. Until Nigerian leaders get the principles and fundamentals of leadership right, they will be unable to find fitting responses to Boko Haram, herdsmen’s land-grabbing propensity, and the many obnoxious manifestations of the country’s socio-economic malaises like banditry and abductions. For that nuanced and complex understanding to be generated, if at all, the presidency must first settle the elementary issue of running a cohesive, knowledgeable and well-oiled presidential bureaucracy.

Take for instance the federal government’s prejudiced response to the herdsmen conundrum. Not only has the government dithered abominably, to everyone’s exasperation, it has incredibly ignored the issue of crime and justice involved in the attacks, preferring instead to pontificate on what regional dynamics make the proliferation of small arms and light weapons possible. It blames the Libyan imbroglio, as if that absolves the government of responsibility in punishing bandits and attackers who freely roam the country with weapons, despoiling the land, forcibly possessing people’s lands, and daring the government to act. The government has remained paralysed. Some two or three years ago, in the space of about six months, the government offered more than four explanations for the herdsmen problem, and also cavorted among three unrealistic and futile solutions. The gravitas that goes with the responsibility of higher office, the solemnity that accompanies settling upon the right solutions to a serious problem, and the studiousness and studied contemplation that must inform a presidential decision are frighteningly lacking. Is it any wonder that many groups read ethnic and religious biases into federal actions, and dismiss the government as incoherent, weak and disunited?

The effect today is that there is really no sensible decision to curb the attacks by herdsmen, not to talk of designating them as a terrorist organisation; and there is no logical or lasting panacea on the Boko Haram menace, not to talk of understanding its many variants and morphology. And there will be no coherent decisions on other germane issues of the day, whether those issues have to do with the misplaced emphasis on IPPIS and universities, the errant decision to compel teaching hospital consultants to acquire a Ph.D when no inventory has been taken of their staff strength, the failure to curb the decay in the police force, the establishment of superfluous universities, including the Army and Transportation universities even when enabling acts have not been signed to give them life, and the abysmal lack of contemplation in understanding the structural roots of the multifarious problems upending the country and predisposing it to chaos.  A suffocating lack of thinking, focus and diligence in national affairs is ravaging the country.

Except they deceive themselves, the government knows that the country is neither at peace nor is it disposed to peace, nor are the problems confronting it transient. As the bishops counselled, it is urgent that the government should find realistic solutions to these cancerous and apocalyptic problems, nothing like it has considered so far. Whether they will find the courage, neutrality and depth to  tackle these mounting problems is anybody’s guess.