Home Columnist A nation without a leader – By Sonala Olumhense 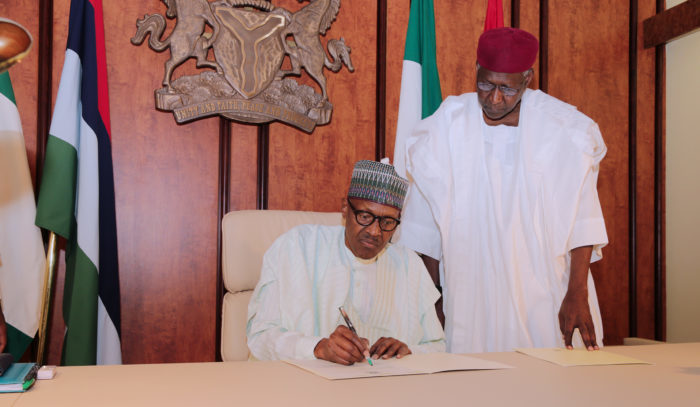 In nominal terms, President Muhammadu Buhari is, having first been produced in 2015 by a largely-credible election.

In practice, however, it has become increasingly clear that Nigeria has no leadership.In five years, Buhari has disappeared deeply into the vapors of power.

By comparison, his predecessor, Goodluck Jonathan, was equally inept, but Mr. Jonathan had a few people around him who neither worshipped nor were afraid of him.  Jonathan swam—and reportedly drank—like a fish, but he did so in shallow waters.

Buhari, we now know, does not know how to swim, and does not wear a navigation aid.  But he appears to believe that if he drifts long enough in the open sea and shouts loudly enough, someone will come along.

In Buhari’s hands, Nigeria is walking backwards.  That is why the most prominent public official is now Abba Kyari, a personal appointee of the president and holder of an office that is unknown to the constitution.

As though Chief of Staff Kyari was not sufficiently disruptive in Buhari’s first term, the president began his second by subordinating members of his cabinet to him.

In this schema, a Minister can still see the President, but first, he must go to the Chief of Staff and answer one question: “Why?”

That is how Kyari became the nation’s defining figure: the authority figure Buhari was unwilling, and apparently incapable, of being.

Last week, so complete became the Kyari ascendancy that National Security Adviser (NSA) Babagana Munguno did not attend the latest of those banal meetings of security chiefs Buhari summons daily to give the impression of leadership.

They gave the excuse that the retired general was representing Buhari at a security meeting abroad.  Think about it: with Nigeria on the verge of collapse, there was a meeting for the NSA that was far more important than Nigeria’s security!

The answer is in a memo Mungono had authored early in December in which he drove his stake into the ground, directing the nation’s service chiefs to stop accepting directives from Kyari.  In the strongest terms, he decried Kyari’s meddlesomeness, saying they “ruptured our security and defence efforts…”

The memo, which leaked last month,seemed to explain the growing insecurity nationwide response. The NSA accused Kyari of issuing directives to service chiefs sometimes without the knowledge or approval of the president.

“[Kyari] is not a presiding head of security, neither is he sworn to an oath of defending the country,” the retired general explained, affirming thatthe activities of the Chief of Staff violated the constitution and undermined Buhari’s authority.

The memo unveiled a government in disarray, with different nodes of authority and responsibility—and presumptuousness—but also Buhari’s nonchalance and complicity.

Nonchalance and complicity do not a leader define.

But Buhari’s response?  Silence.  It was the same response in 2018 when his wife cried out that two people had taken her husband’s government from him.

She had further slashed out at some shadowy others: “I am disappointed in men who rather than fight these two men will go to them in the night begging for favour.”

Her husband delivered that robust indifference.  He did not seek to reassure his governmentor the people.

And he has not done so now, at Nigeria’s most insecure and dangerous point since the civil war.

As this column has demonstrated in the past few years, Buhari has now saddled Nigeria with a government which claims it knows what security is but has delivered insecurity instead.

He has delivered even worse on the economy, where unimplemented pledges and plans, along with chaotic policies, half-policies and pseudo-policies, have boosted unemployment and crime.  Consider, for example, that the Trader Moni scheme which preceded the 2019 election has disappeared.

Buhari has delivered his worst performance on the anti-corruption file, where his words have been exposed for their emptiness, and corrupt elements run the show, and are running unchallenged.

Again and again, Buhari and his worshippers have assured the nation of their victory over Boko Haram, but each time the government has been embarrassed as the militants have returned to wreak havoc not just on civilians, but on soldiers.

Only last July, the Wall Street Journal reported how the government has lied to Nigerians about how the war is going with a pattern of secret burials of soldiers in such places as Maimalari, near Maiduguri.

“After dark, the bodies of soldiers are covertly transported from a mortuary that at times gets so crowded the corpses are delivered by truck, according to Nigerian soldiers, diplomats and a senior government official. The bodies are laid by flashlight into trenches dug by infantrymen or local villagers paid a few dollars per shift,” it said.

“Several of my comrades were buried in unmarked graves at night,” one soldier of the MaimalariBarracks told the newspaper, adding, “They are dying and being deleted from history.”

This pattern of deceptiveness and manipulation, where performance and productivity arefar easier and cheaper to deliver, sadly defines the Buhari Era.

Leadership is when the leader can define what a problem and what is being done about it, including adjustments to policy.  For Buhari, power was the objective, and is the end.  Even after five years, cannot demonstrate his grasp of, or response to any Nigerianchallenge.

At best, he presents stock clichés as solutions, and indifference as eloquence.  There is nothing to which Buhari is so committed or passionate that he has clarity or staying power.That is why Kyari is in control.  Nigeria’s problems are not worse despite Buhari’s efforts, they are worse because of Buhari.

Nigeria is therefore not just an army without a leader, it is an army with no sight.Under his watch, leaders of the federal legislature leaders are now extending to themselves the forbidden fruit of immunity.  In effect,the same party which said it would combat impunity by reducing immunity is multiplying one by the other.

But a country without a leader has no future.  That is why patriotic media and citizens groups should take a cue from the Socio-Economic Rights and Accountability Projectand take the fight to governments and government institutions through the law.  The Freedom of Information law is begging to be used, and it is a shame that the mass media is not using it.

This vacuum must not last.