Home Columnist From Trump to the Kaduna Mafia 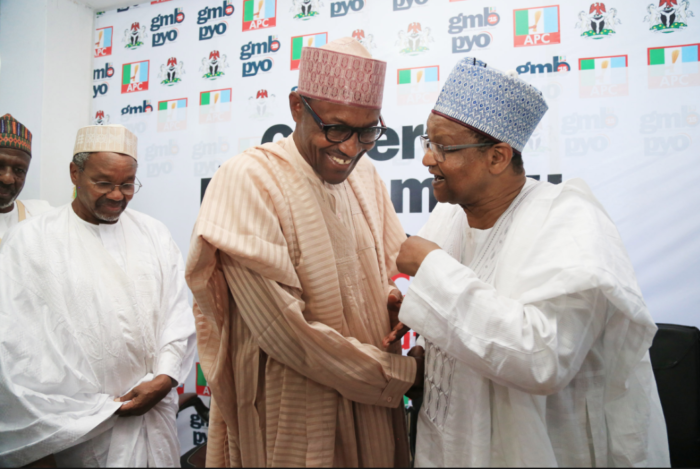 The comparable idea to the myth of the ‘Kaduna Mafia’ is what embattled President Donald Trump frequently harps upon as the Deep State in the United States of America. Characterised by contrived anonymity and elusiveness, they are defined more by myth than reality. The latter characteristic is a derivation from the culture and heritage of the dreaded Italian prototype-the Cosa Nostra. You know it is there, but it is an uphill task proving the fact of its existence. Remember how long it took to entrap and convict Al Capone? If you don’t know the Chicago Mafia boss, you would at least have encountered the classic movie representation of the Godfather.

Back to the Kaduna Mafia type. Where they exist, they operate under the radar as power behind the throne-so to say; and the fact of their existence have relative and varying degrees of validity and believability. The less opaque and more democratically transparent and accountable the public context, the narrower the margin of the probability of its existence. Thus, realistically and comparatively (and in its prototypical form) it has far better prospects of existence and success in Nigeria than the United States. Generically, It has been variously identified as: “networks of officials, private firms, media outlets, think tanks, foundations, NGOs, interest groups, and other forces that attend to the needs of capital, not of everyday life while concealed from public gaze or hidden in plain sight”, “a hybrid association of elements of government and parts of top-level finance and industry that is effectively able to govern society without reference to the consent of the governed as expressed through the formal political process”.

The nearest the idea has intruded in the consciousness and the public imagination of America is its association with the notion of a ‘Military–Industrial Complex’ which prompted this remark from President Dwight D. Eisenhower in his 1961 farewell address: “In the councils of government, we must guard against the acquisition of unwarranted influence, whether sought or unsought, by the Military–Industrial Complex “. In its benevolent occurrence, the genealogy/epistemology of this variant of power elite hacks back to Pareto’s elite theory, Plato’s philosopher king concept and Aristotle’s formulation of the aristocracy idea.

The elite theory posits “that a small minority, consisting of members of the economic elite and policy-planning networks, holds the most power—and that this power is independent of democratic elections”; “a select group of people with a certain ancestry, intrinsic quality, high intellect, wealth, special skills, or experience—are more likely to be constructive to society as a whole, and therefore deserve influence or authority greater than that of others.”
The reference to Trump and America is deliberate and it is intended to illustrate the proposition that such a group (the Mafia or so called Deep State that is)-if and where it exists, can serve as a force for public good and manifest the ideal type characteristic of the philosopher king concept. To the extent that America and the world need to be saved from Trump, any group ascribed with the capacity and proclivity for pushing back against his pathological excesses must be hailed as American heroes. It is the measure of the ‘alternative universe, conspiracy theory’ culture of Donald Trump that seldom can anyone recall his predecessors propagate the myth of the deep state as active reality-intent on subverting the democratically elected President. The irony here is that, were the talks of the existence of a deep state to be delusory, the conduct of Trump would make it necessary to invent one. Beyond the legitimate opportunism and partisanship of the Democratic Party, such pressure groups are deemed a unique demonstration of the leadership responsibility the national elite bears-for the preservation of the values that underwrite the stability, durability and functionality of society. Where it demonstrates the potential for good, there is a discernible convergence and congruence of such roles with the (long-term) interests of the public.

However, its utility is situational and context specific; and just as short-term conveniences could be the enemy of the long-term imperative, so could its strategic vision be at cross purposes with instant gratification syndrome and populist posturing. It is equally noteworthy that just as it can function as a force for good, there are occasions where its conduct, goals and objectives may prove subversive of public interest. Within the context of democracy and democratic rule, it is difficult to justify or rationalise the existence of unaccountable power elite, but it is obligatory to extenuate its benign and benevolent expression and intervention in the polity. Democracy is prone to dysfunction (notably chaos, confusion and manipulation; and vulnerability to the emergence of mob rule and rogue leadership). Regardless of such limitations, democracy, notes Winston Churchill, may be the worst form of government but no better alternative has yet been invented and evolved by mankind

According to contemporary Nigerian political legend and speculation, ‘Kaduna Mafia is the name given to a loose group of young (they are now old men in their late seventies and early eighties by the way) Northern Nigerian intellectuals, civil servants, business tycoons and military officers residing or conducting business in the former Northern capital city of Kaduna during the end of the first republic. It is believed the resentment of competing interests led to the creation of the acerbic idea of a clique gaining headway through its closeness to power and thereby approximating resources of the state under the banner of capitalism’.

I have heard of the Kaduna Mafia before I met Dr Mahmud Tukur- ideologically focused, intellectually intense, politically aggressive, socially introverted and discriminatory, and above all, totally immersed and invested in Fulani Muslim identity politics-he was the personification of the Kaduna Mafia-if ever there was one. I was quite excited at the prospects of making his acquaintance-in anticipation of the intellectual insight into the politics of the dominant conservative wing of the Northern political establishment I stood to gain from the relationship. In this aspiration, I doubt if anyone could do better than the former Minister and founding Vice Chancellor of Bayero University as guide and mentor. And I was not disappointed. Just like me, no engagement better animates him than the scholarly discussion of Nigerian politics. If there was a blueprint for the establishment of the Kaduna Mafia, I have no doubt in my mind he would be the author. In such blueprint would be found the role identification for a group like the Kaduna Mafia to serve as think tank for the post 1966 emergent Military-Bureaucratic power elite.

It is quite unlikely for anyone to be in the company of Tukur for any reasonable amount of time and not get to meet personalities like Adamu Ciroma, Mamman Daura, Shehu Yar’Adua, Adamu Fika, Liman Ciroma, Suleiman Kumo and Muhammadu Buhari who were all famously speculated as constituting the core of the Mafia. Of the lot, he seemed closest to Mamman Daura-taciturn, sour and arrogant, he comes across as overly self-conscious and near totally absorbed in himself; and has his significance burnished by a managerial propriety rights over his uncle, Buhari-who has emerged since the 1983 coup as a crown prince of sorts. And they all seemed to share a common disposition of seriousness and discipline.

I will reaffirm the proposition I have always canvassed that Northern irredentism (or hegemony) does not have to be inconsistent with the socio-economic development of Nigeria. It is the gross abuse of that privilege that has abased Nigeria and commensurately provoke the outrage and repudiation of other Nigerian stakeholders. Put differently, I have no problem with Northern hegemony, so long as it is coterminous with manifest potential to develop Nigeria. No less, I assume that this political bargain is the raison detre of the Kaduna Mafia. In return for being instrumental to the sustained social economic development of Nigeria, I am quite willing to grant the Mafia the hegemony it so much desires. Anything short of this balanced bargain and mutual reciprocity would amount to double jeopardy. You cannot want to lord it over me and reinforce this concession with the underdevelopment of Nigeria. Ostensibly, this assumed shared perspective typically gave rise to the military coup intervention that ousted the Shehu Shagari government (haven been adjudged a failure and giving a bad name to Northern hegemony). It was the same ostensible rationale that prompted the political outreach to Chief Obafemi Awolowo in the 1983 general elections. Now we know better.

The paired two myths (a visionary Kaduna Mafia and reformist Buhari) have now been shattered resulting in the wry observation that were Buhari not to be availed the opportunity to become President of Nigeria again, he would have gone down in history, along with Awolowo as the best President Nigeria never had. In terms of its association with the Kaduna Mafia, the Buhari Presidency is virtually a replay of his stint as Military dictator of 1984/85-given that (amongst other identikit) Mamman Daura, is literarily the alternate President. The story of the Buhari Presidency is the illustration of his complete self-demystification and the unravelling of the reputation of associated myths and proximate political tendencies. This is the negative political feat that he and his nephew have been able to accomplish-evident in the typical underlisted testimonies from their households and lifestyles

“Mamman Daura, Nigeria’s de facto president, celebrated his 80th birthday in London with his family & associates, including Senator Amosun & Sirika. Buhari is also in London on a “private visit” with public funds. They luxuriate in sybaritic pleasures abroad, closed borders at home, inflict hardship on the middle class, and tell the poor to eat only local rice. Apparently, the good things of life are the exclusive preserve of Buhari, his family, and a select favoured few.”

“My name is Fatima. I am a daughter to Malam Mamman Daura… if one reasons well, he or she will understand that it is not possible to say that the wife of the president is denied access to her apartment but let me give a context,” she said. “The apartment in question is called the Glass House. You know that there are several houses and apartments in the villa. When the president got into office, he gave the Glass House to our father, Mamman Daura.”