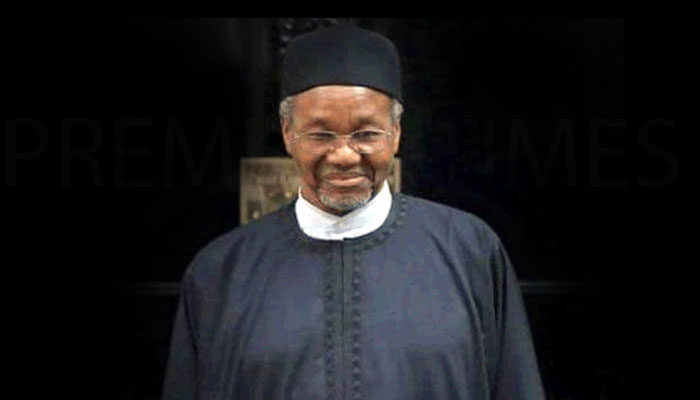 Close associates and other influential compatriots have continued to pour encomiums on Malam Mamman Daura, former editor and managing director  of the defunct New Nigerian newspaper, businessman and industrialist and, unofficially, a man regarded as the power behind the throne as this unassuming, un-obstructive newspaper legend clocked 80 years.

Though I cannot claim to be an authority on the man, but a relationship of four years part of it by proxy and part by direct contact, was for me enough education on the man to make me eminently qualified to join the band wagon of well-wishers. For starter, we are old boys of the same Alma Matter: Government Secondary School Okene, he of 1956 set and yours humbly of 1969 set. That proudly, if not arrogantly, qualifies me to lay claim on Malam Mamman Daura.

But more was to come. I chose journalism as a career.  Or, better still, journalism recruited me as one of its potential apostles when in the same Okene, I was almost expelled from the school in 1967 for publishing an article deemed to be incendiary  and offensive in the school newspaper, the Okene Chronicle.

Actually, it was by accident. The editorial board of the newspaper had organised an essay competition titled “what disgusts me most in Government Secondary School Okene”. The winning essay happened to be mine. And I got a prize for it. But when the editorial board later published it, DJK Farrar, Briton and a strict disciplinarian, who was principal, did not find the content of the piece funny.

In essence, I spoke truth to power by pointing out what I thought was some cant and hypocrisy on the part of the school authorities.  The man was not content by merely hitting the roof, he threatened expulsion unless I substantiated all the allegations I made in the publication. To help me discharge this weighty responsibility, he gave me a clean sheet of paper. I should return it the following day filled up with names, facts and figures. But I refused to do his bidding.

But instead of expelling me from the school he had a change of heart. He, instead, drafted me to the editorial board of the school newspaper as if that was the next best punishment for my impetuousness.

My odyssey in the profession had commenced. It landed me in New Nigerian in 1973 as a student on vacation from the University of Lagos. The journey continued in 1975 as a youth corps member serving at the New Nigerian in Kaduna where Malam Mamman Daura held sway as managing director. Under his watch and the close monitoring by my mentor and editor, Malam Turi Muhammadu of blessed memory, I learnt a great deal of what they wouldn’t teach you in any school of journalism.

When I completed the National Service in July 1976, I effortlessly transformed into a full staff.  Malam Mamman did not fail to notice my contributions as a youth corps member. He did not hesitate therefore to approve my employment.

But the more dramatic turn came two months after I had started work. Malam Turi, the editor, called me to his office on October 15, 1976 to report the news that Malam Mamman, the MD, had approved my promotion as associate editor of the New Nigerian. I was to be posted to Lagos as part of the company’s “carefully laid down succession and business programmes.” Malam Mamman had foresight and he encouraged the recruitment of talented and well educated personnel to man the various units of the company. He inspired staff and to believe that the greatest weapon against oppression was to stick to principle. He practised what he preached and this did not endear him to the regime of General Yakubu Gown who thought at some point that the New Nigerian was becoming subversive.

Malam Mammam was detained in Lagos for about five days for drawing government’s attention to some lopsided appointments and development projects. But he admitted in a paper he delivered in 1970 that the New Nigerian under him was more independent than even the independent Daily Times. He said: “It may be hard to believe this, but the New Nigerian has not been subject to sustained government interference…. Indeed, we are by common consent more independent than the commercially viable and independent Daily Times. We have been able to withstand government pressure more successfully than they have.”

The late sage and publisher of Tribune newspaper, Obafemi Awolowo agreed with Malam Mamman when on the occasion of the commissioning of the Lagos plant of the New Nigerian in February 1973, the first of its kind in the country, he said “the New Nigerian enjoys a country-wide reputation for fearlessness, independence and consistency in its approach to public issues.”

As if taking Thomas Hardy’s admonition to heart, the New Nigerian did not hesitate to rebuke those in authority where rebuke was seen as the appropriate weapon with which to clobber them to the path of sanity and moral rectitude. In an editorial comment titled “Corruption and good government” the paper said on August 26, 1974: “Believing in the principle of accountability of leaders and the sanctity and pre-eminence of the public, the New Nigerian calls on the Federal military government and people in positions of power and influence to prosecute a thorough self-analysis and purge the country of crooks, thieves and corrupt men whatever positions they hold and whatever part of the country they come from.”

The newspaper did not have any qualms in taking a swipe at rival newspapers that showed any sign of waywardness in their unthinking sycophancy. The Federal government owned newspaper, the Post fell victim of its own propaganda tantrums when in the early seventies it resorted to bare-faced lies in support of the government. Civil servants had gone on strike and pleas to call off action fell on their unhearing ears. But the Post newspaper came out with bold headline proclaiming that workers had called off their strike.  Workers who felt scandalised as well as the reading public voted with their three pence and boycotted the paper. That spelt its demise.

In what looked like an epitaph, the New Nigerian on May 7, 1973 said: “the Morning Post and its lamentable sister paper, the Sunday Post, were examples of unsuccessful newspapers. Among the senior employees were time servers, professional sycophants and financial mismanagers. First, they set out to defend mulishly every action of government – even at the expense of accuracy and self- respect. They advocated and defended things they knew to be wrong, resorting to blatant untruths and they, more than anybody, knew it.  Consequently, they lost public confidence without in the least helping government, although some government functionaries (misunderstanding the role of the press), glorified in cheap and shabby publicity.”

This was New Nigerian at its best – incisive, caustic, fearless and authoritative. But alas, it was too good to last. The poisoned chalice that killed the Post newspapers was later administered on the New Nigerian.

Malam Turi Muhammadu, one of the long lasting potentates of the organisation, published a book on the first 20 years of New Nigerian. In sourcing materials for the book, he interviewed past chief executives, including Mamman Daura. How did he see the New Nigerian at the beginning of this millennium?

His candid view: “To be honest, the New Nigerian is a shadow of its former self. The rot started in 1980 when the civilian government deliberately destroyed the carefully laid down succession and business programmes by appointing unsuitable people to top positions just to spite us. From 1980 it has been, unfortunately, downhill all the way.”

Malam Mamman,  as you continue to age gracefully, spare a thought for our lost empire, the New Nigerian, once regarded as the Al -Ahram of Nigeria.