Home Uncategorized Are there elders in Buhari’s household? – By Abimbola Adelakun 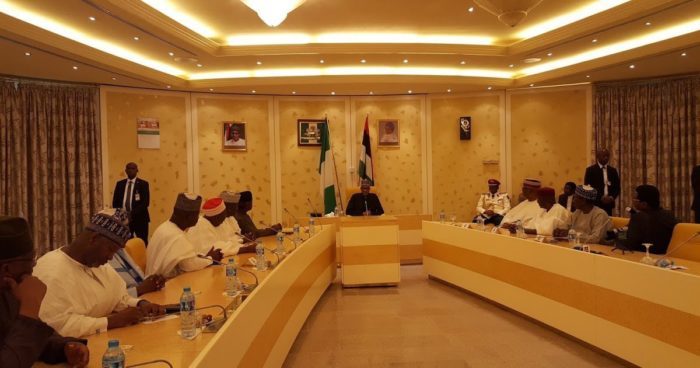 The only purpose his unwavering belief in the gospel of discipline has served is the legitimation of abuse of Nigerians.

But ruses have a way of outing themselves. The recent public exchange by his family members shows that Buhari, the chief disciplinarian, leads a household that lacks discipline. So far, it is 2019’s biggest paradox. When Aso Rock’s events of the past two weeks are summed, they tally into a spectacular wonder: the man who has spent the better part of his life barracking Nigerians over discipline somehow overlooked his own nuclear and extended family!

First was the mischief of his social media-created marriage to another wife. Second, the sitting first lady, Aisha Buhari, seemingly responding to the threat of displacement, hastily returned to Nigeria from a trip she did not announce she was taking. Third, the twist in the Aso Rock meltdown – Fatima, the daughter of Buhari’s nephew, Mamman Daura, crowned herself the public conscience. In quick order, the charade fell apart and the Aso Rock under Nigeria’s Caesar was revealed to be an unruly seat of indiscipline. The family that rivals the resident jesters of Aso Rock is the Fuji House of Commotion.

Aisha Buhari’s interviews to respond to the dust that unsettled while she was away, again, became a means of corralling public sentiment in her favour. The way the woman talks about her family issues in public makes you wonder if she and her husband even have a relationship at all. This time, her salvos were so baffling you wonder if Buhari is in charge of his household. Or, he just sits somewhere, picks his teeth while his women beat each other and make video recordings of themselves while at it? Then, Fatima. From the entitled way that one talked, you would think Aso Rock is her father’s agboole (compound) and she deserves a space there at all costs.

After listening to all the sides, you ask if there are elders in the President’s family who can enjoin the warring parties to stop disgracing themselves and Nigeria. If Buhari is too old, too weak, or too laid-back to discipline his family, there should at least be some respected people in his family who should have enough perspicacity to see that all of the nonsense soils the President’s reputation.

If such elders exist in Aso Rock or Daura, they should step in and intervene on Buhari’s behalf – if he is too busy with national affairs. They should save him from the shame of his family and save all of us from the distraction of a first family acting out a season of Big Brother Naija. They should be encouraged to classiness. They are the President’s family, not the Kardashians. They should stop acting out in public like a savage troupe.

After your disgust with the family squabbles settles, then other things dawn on you. Wait, you say, did Aisha Buhari just say in that interview that the President’s grandchild was born in Spain? Did she just talk about crisscrossing the world from the UK to Saudi Arabia for medical and religious pilgrimages? Oh, wait again, did Mrs. Buhari just thank her husband for appointing six aides to her “office” to manage her affairs while she was away? You listen to all this, and you question how it came to be that the President who asks the country to sacrifice their tastes for foreign goods had his grandchild born in Europe.

Was this not the President who once shrugged and said “tough luck” to those who could not get forex to school abroad? How come he is not living by what he preaches? Whatever happened to the National Hospital in Abuja that could not accommodate his grandchild? To force Nigerians to consume locally made products, Buhari’s government has shut down land borders. Expectedly, the prices of essential goods have gone up while there is no concomitant increase in their income level. Consequently, things are tough for people more than ever before but of course, such hardship is the vision of a “disciplined” citizenry Buhari imagines will propel Nigeria to a greater height. Yet, in his private life, he and his family live lavishly.

Amidst all of the disciplining of people going on, the President and his immediate family are junketing the world on our dime while his extended family mooches off on the Villa’s resources? So, is Buhari’s policies actually about disciplining people into better behaviour or just an expression of sadism? If it were truly about discipline, it would, and should, start within his household. Think about it, the same government that says they will have to sack workers before they can pay the proposed minimum wage appointed six aides for the President’s unelected wife?

What was even more baffling is how these revelations flew out of their mouths without a sense of self-awareness. Fatima Daura’s moan about Mrs. Buhari makes you wonder if she is not the quintessence of the lazy Nigerian youth that wants everything free; the type Buhari himself bemoaned the other time. Before Buhari became President, was she sleeping on the streets?

Finally, I know Nigerians joked a lot about the President’s impending wedding to his Minister of Humanitarian Affairs, Hajiyya Saddiya Farouk, but the punchline seems to have flown over our heads. The rumour circulated partly because of Aisha Buhari’s absence from public view. When she returned and was asked about it, her answer gave away a lot. Although the wedding itself never happened, but as the Yoruba say, it is in the moments of frivolity that we come to a realisation of the truth. Here is an angle to the purported wedding we should all consider: suppose Buhari intended to marry that woman, what stops him? This is not about religious or cultural propriety of his taking another wife, but democratic ethics.

Within the short period that the President set up a new ministry and appointed a woman as the head, rumours sprang that he would also marry her. If he had gone ahead and done it, he would have set up horrible precedent on the use and abuse of power for personal ends. But then, when you ponder it, you see that this is a President who has already carried nepotism to a level most of us could not have imagined a mere five years ago. If he decides to go further and repurpose part of his kitchen cabinet into use for “Za oza room,” what could have stopped him? Which agency of government today has the autonomy or the administrative boldness to confront him on such impropriety?

They will all quiver under his majesty and find excuses for him like they are wont to do. The only place the noise will come from will be social media, and even that will eventually fizzle out after some news cycles. So, yes, Buhari could have done it and got away with it.

The War against Nigerian Media – By Simon Kolawole