Home Columnist Temptations of the First Lady – By Sonala Olumhense 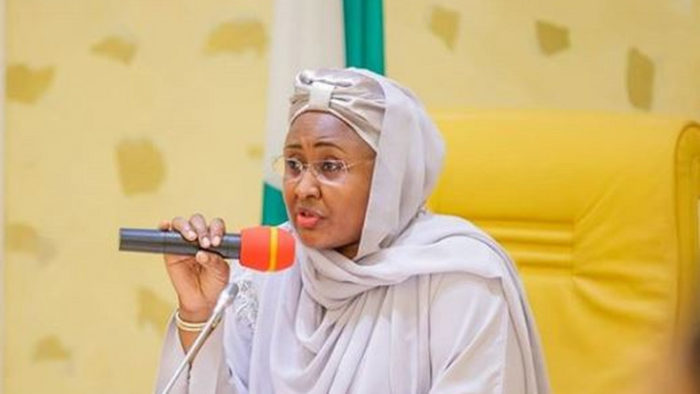 From the look of things, there may finally be peace in the First Family.

‘Wife of the President’ Aisha Buhari is back in the country, but finally as the First Lady, the title she has craved since her husband became President Muhammadu Buhari in 2015.

Months before that election, the candidate had appeared to be asserting himself, pointing out that the constitution provided for no such office.  The argument was easy, as the outgoing First Lady had made a greedy nuisance of herself.

Aisha agreed.  Speaking at the inaugural meeting of the APC women presidential campaign in January 2015 she pledged to join her husband in affirming the constitution, saying she would “perform my duties and role as the wife of the President of Nigeria traditionally.”

In May 2015, partly because the Buharis repeatedly swore allegiance to the rule of law and the constitution, Muhammadu was able to take the oath of office.

That meant that, as was expected, that Aisha became “wife of the President.”

But we now know that that merely commenced four years of pain for her, as she had to suffer the ignominy of being just the wife of the office-holder.

Only weeks after he was sworn in for a second term this year, she shed that yoke. “When my husband was elected newly, I personally chose to be called the wife of the President,” she said with a straight face.

“I,” and “me,” were her words. She did not mention the constitution in the matter, and certainly not her husband.

“But, I realised that it causes confusion from the states as to whether the wives of state governors are to be addressed as the first ladies or wives of the governors.”

That was simply an excuse: there was and is no confusion, and if anyone wanted to obey the constitution, all those women, most of them idle and pompous and over-dressed, would simply each have been known as “Wife of the Governor.”It is not the title that makes the spouse of the chief of state honest or hardworking or effective, but an idle and pompous First Lady can make a bad governor infinitely worse.

The truth is that Aisha Buhari stopped being just “Wife of the President” a long time ago, as she developed a taste for luxury presidential living and travel and as her husband established an illegal structure he called “Office of the Wife of the President” that he proceeded to fill with equally unconstitutional aides. In July 2018, more aides were appointed.

In the past few weeks, the remaining cobwebs have been lifted from this grand abuse of presidential power.  But it began in 2016, with Mrs. Buhari’s criticism of her husband’s government, particularly her painful comment that if things didn’t change, she was unlikely to support his bid for a second term.

For those who recall, he returned that fire with his infamous rooms-in-the-house comment.  But it was not a rebuttal. He offered no rebuttal, leaving her observation atop the mountain of issues to which he is unable to respond meaningfully.

And then this year, she found reason to disappear from his country and from each of Buhari’s rooms completely, setting the stage for his final surrender as rumours swelled of chaos in the First Family and of his plans to redecorate his rooms.

Aisha then swooped back in last week, and it immediately became clear Buhari needed to placate her for some reason, and at whatever cost.  Two days after her returned, he sent a new thicket of aides to what is now the Office of the First Lady.  Hours later, she mentioned the African First Ladies Peace Mission (AFLPM) by name for the first time in four years, saying she will construct a regional secretariat for it in Abuja.

And no, don’t you worry, she said: she has already obtained a vast parcel of land for the project, and Africa’s First Ladies will soon be in Abuja to break ground for it.

But if her Office has no constitutional location, that means it has no budget.  Where then did she find the funds?  Was the land another illegal gift made by a friend of the presidency?  Remember, Buhari himself, who claims to be fighting corruption, has indicated that he is open to gifts: last year, he accepted N45million in party election forms from the fictitious Nigeria Consolidation Ambassadors Network.

Aisha herself, it may also be recalled, was at this time last year visiting her fury on Chief Superintendent of Police Sani Baban-Inna, her aide-de-camp, whom she accused of failing to deliver  over N2.5billion in “donations” he had received on her behalf from politicians and business people.

Not gifts, but “donations.”  Politicians and businessmen secretly “donating” money to the wife of an “anti-corruption champion”!

But it would appear there is at least one precedent: Aisha’s predecessor Patience Jonathan.  First dispossessed by the EFCC in September 2006 of $13.5mand N104m she had tried to launder, Mrs. Jonathan was again in 2016 exposed by the Central Bank’s Biometric Verification Number registration, which led to over $15m in her accounts being frozen.  She explained the money had come from many contributors over 15 years.

Her problems mounted early in 2018 when the EFCC further announced a “major (international) breakthrough” which exposed another $11.8min two of her domiciliary accounts.  Although she quickly proposed an out-of-court settlement of all cases against her, she failed to get it, and went on to lose those cases.

Perhaps the land for the AFLPM was given to Mrs. Buhari not by a “donor” but by the presidency?   That would still be illegal.  And if it has taken her the better part of five years to find a piece of land, how many tenures of office will the Buharis need in order to undertake the project, if ever?

As Mrs. Buhari ventures from the safety and security of the presidential villa into the political arena, she may wish to study how those who previously did so became more “First,” and less “Lady.”

In 1999, President Olusegun Obasanjo was the first to declare that in recognition of the constitution, there would be no office of First Lady.  It is tragic that the Buharis, who know far better, have chosen to violate the constitution and their own promises, towards foisting on Nigeria this new layer of illegality, greed and deception.

There are many ways in which the wife of the leader, where she is honest, becomes driving force of progress and the spirit of its people.

In other words, being the spouse of the president does not diminish anyone. But trying to supply what the constitution denies, rather than challenging and encouraging your spouse to be a true and effective leader at a time he is floundering, is a signal of bad things to come.

Your immediate profits may be large, but 200 policemen per hour will not protect your reputation once out of office nor erect a legacy your children can be proud of.

Nor will there a room large enough in the palace to hide the truth, or riches to buy its peace.