Home Columnist An Army for hire – By Prince Emeka Obasi 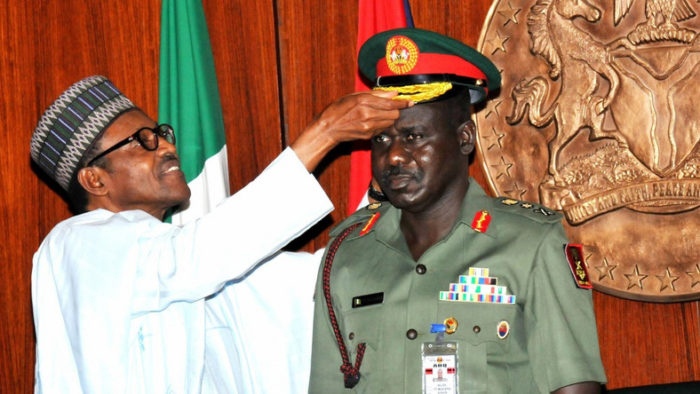 Usually, there are few circumstances under which death is preferable to life. As the Igbo would say, a life of pain and struggle is better than death. However, for the late Lt. Gen. Salihu Ibrahim, one time Chief of Army Staff, it is better to die than to be alive at this period in Nigeria’s history. Gen. Salihu had made the famous remark on the eve of his departure as Army Chief, that “the Nigerian Army has become an army of anything is possible”.

At the time, the statement caused a seismic shock all over the country, because the army which he appeared to be disparaging was the same one he had superintended over. It was an institution that had earned the respect of many people, both at home and abroad, for its professionalism and fighting spirit. It had exhibited uncommon valour, not only during the civil war, but also in various theatres of operation in different parts of the world. The bravery displayed by the Nigerian troops in the Congo remains the stuff of legend. And of course, in recent memory, the Nigerian Army played a leading role in securing the peace in Liberia and Sierra Leone when those countries were wracked by violent eruptions in the 90s.

Since the inception of Nigeria as an independent nation in 1960, the Army has, despite its challenges, remained one of the institutions that bind Nigerians. It is to its credit and that of its leadership at the time, that after the civil war, many officers and men of the Biafran Army were re-absorbed. And even though many of them suffered loss of seniority as a result of the period they fought in the Biafran Army, it did not affect their subsequent career rise and promotion too adversely.

However, that has changed, sadly. At no time in the history of modern Nigeria has the image of the Army become as battered as it has in recent times; certainly not during the civil war, and not even during the long years of military rule. Lately, the Army has fallen from its high pedestal as an eminent institution that is professional, apolitical and nationalistic, and has increasingly become a pun in the chessboard of politicians. The question to ask is, how did we get here? How did an institution of such eminence become one for hire?

During the 2015 elections, the then ruling People’s Democratic Party (PDP) tried to use the army to man the elections. But well-meaning members of the public, including leaders of the opposition All Progressives Congress (APC) rose up in arms against the move. And they were right. The experience of the Army’s involvement in the governorship election of Ekiti State, left a sour taste in the mouths of many Nigerians. It was an open secret that it played an ignominious role in influencing the victory of the PDP candidate, Mr. Ayodele Fayose. In many proven instances, it was used to intimidate and oppress members of the APC and their supporters.

Because of that experience, many well-meaning Nigerians realised the danger in allowing the Army to be used as security agents for the elections. That was why there was a loud uproar when the Goodluck Jonathan administration expressed its plan to deploy them. The APC had challenged the move in court, and if I recall correctly, there was a Supreme Court judgement against the involvement of the Army during elections, except on the express invitation of the Chairman of the Independent National Electoral Commission (INEC).

Four years down the road, the APC is now lord of the manor. Anyone would expect that given the experiences of the APC with the PDP and the Army while in opposition, it would ensure that the law, in respect of the deployment of the Army during elections, is obeyed to the letter. Unfortunately, the APC did not feel inclined to do that. Instead, it unleashed the Army as a third force in its campaign at various levels all over the country. What emerged therefore, was the despicable scene where Army officers trained and maintained by the tax of Nigerians were being deployed to secure victory, sometimes, apparently at all costs, for various APC candidates in different parts of the country.

The case of Rivers State, among many others, stands out sharply. From video footages and eye witness accounts, including that of officials of INEC, the Army in Rivers State became enforcers for the candidate of the African Action Congress (AAC) who was being supported and promoted by the APC and its leadership in Rivers, led by the Hon. Minister of Transport, Chibuike Rotimi Amaechi. The Army that is paid to secure Nigeria and Nigerians, instead became that of occupation functioning like mercenaries, shooting, maiming and killing Nigerian citizens who had trooped out to exercise their fundamental rights of choosing who should govern them. It is sad and tragic. What is even worse are the facts that are emerging from that fiasco. The Army authorities, through its Director of Public Information, issued a statement that the soldiers who were involved in this incident were not men and officers of the Army, but hired thugs. The statement was, of course, a blatant lie. The fact that the Army authorities could lie so blatantly on an issue like that is very worrisome. What it says is that the Army is not ready to accept responsibility for the misbehaviour of its officers and men and, therefore, is unwilling to call the erring officers to account. It also shows that the institution that is built on honour and integrity, has almost lost its way and has become politicised.

Luckily, it would appear as if good counsel has prevailed. The Chief of Army Staff, Lt. Gen. Tukur Buratai, in response to the mounting public criticisms locally and internationally, has set up a high-powered probe panel to investigate the issue. I hope that the probe panel is not a smoke screen, but a genuine effort to establish the truth of what happened with a view to meting out the appropriate punishment to all the culprits, and putting in place measures to avoid a reoccurrence.

There are unsubstantiated allegations that the Chief of Army Staff Office was not aware of the deployment of soldiers in Rivers State in particular. Sources close to the presidency in Abuja have alleged that elements within the Buhari administration colluded with the leadership of the Army in Rivers State who deployed soldiers to support the AAC candidate. I sincerely hope, for the sake of our country, that this allegation is not true. Because if it is true, it holds out very frightening scenario for the future of Nigeria.

What it means is that the Nigerian Army has descended into the abyss. It has become an institution of where, truly anything is possible. The next step will be for sundry warlords to penetrate the command structure and rent officers and men of the Army in pursuit of their interests. No nation can survive, not to talk of developing sustainably in this kind of environment.

The Army remains, for every country on earth, a cherished symbol of nationalism. It is usually well respected and is hallmarked by discipline and rigid adherence to order. When divisional officers resort to taking orders from political merchants, then, the entire hierarchical system of the Army would have been destroyed and its cherished esprit de corps killed. That would be an open sesame to chaos.

When one looks at the Nigerian Army today, it is difficult to imagine that it is the same institution that produced the likes of Maj. Gen. J.T.U Aguiyi Ironsi, Gen. T.Y Danjuma, Gen. Alani Akinrinade, Gen. Murtala Mohammed, Gen. Olusegun Obasanjo, Commodore Ebitu Ukiwe, Gen. Domkat Bali, Brig. Gen. Benjamin Adekunle, etc. One wonders how these great generals would feel about the state of their cherished constituency today.