Home Columnist Young people have mentally checked out of Nigeria 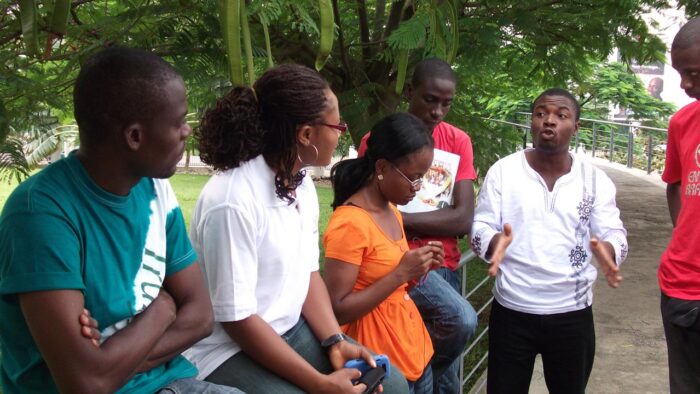 Young people are traditionally associated with vim, vigor, enthusiasm, and idealism. They energize social movements, inspire revolts, and help shape the contours of the future. But I’ve noticed that in the last few years, the vast majority of the Nigerian youth have effectively dissociated mentally from Nigeria.

They have lost interest in the affairs of government, human rights, democracy, social justice, and other high-minded ideals. Entertainment, gossip, comedy, football, and petty fights on social media are now their escape from the strain and stress of life in Nigeria.

I started observing this from the quality and quantity of engagement with news on social media. I noticed that the typical average “like” and “share” (or “retweet”) counts for stories shared on social media by Nigeria’s most visible national news platforms are always in the ballpark of 800.

In offline Nigeria, the culture of civil rebellion against tyranny is virtually gone. Student union activism, which used to be the initiatory rite to social justice activism, has been dead for a while. That’s why Omoyele Sowore’s #RevolutionNow protests attracted only a handful of the Nigerian youth. Scores of young people who should join it accepted pittance from the government to counter it and to deride it on social media.

There are at least three reasons for the progressively alarming mental dissociation of the Nigerian youth from issues that will shape their collective futures whether or not they realize it. The first obvious reason is plain, old, shortsighted self-interestedness. Human beings are biochemically wired to seek pleasure and avoid pain.

Nigeria is a source of endless mental and emotional anguish. From the decay of infrastructure, to rising insecurity, to the expanding oceans of blood across the country, to the conscienceless theft of national resources by everyone in government, to intractable impunity and lawlessness by people who are tasked with making and enforcing the law, Nigeria inflicts pain—even on those of us who are not directly affected by the country’s dysfunction because we live abroad.

In light of the frustration and helplessness that this state of affairs inspires, many people, including the youth, choose to escape into mental universes that they can control, that can give them ephemeral joys and freedom from disabling anxieties. Unfortunately, mental escapes don’t solve problems; they only suspend them temporarily.

The second reason why vast swaths of young Nigerians are no longer animated by social justice issues is that they have very few people to look up to for inspiration. With a few exceptions, most of the people who used to be at the vanguard of social justice are now in bed with the Buhari regime, which is by far the most tyrannical, the most inept, and certainly the most unjust government since the restoration of civilian rule in 1999—and perhaps in the entire history of Nigeria.

If there is any regime that deserves to be confronted by a sustained, organized, nationwide, pan-Nigerian civil insurrection, more than any in Nigeria’s history, it is the Buhari regime, but it is ironically the one that is mollycoddled and legitimized by hitherto professional activists.

Activists who are not openly in bed with the regime run with the hare and hunt with the hounds, and most people are smart enough to know this. I’ve had the opportunity to speak with some former activists who are now unabashed pro-regime apologists, and they’re united in saying that they don’t want to be condemned to being economically disadvantaged, perpetual agitators for justice and democracy while undeserving people benefit from their toil.

They said other people should take off from where they left off. But that is simplistic. Their betrayal of the cause they were famous for hasn’t only broken the intergenerational continuity of a long tradition that goes back to the anti-colonial struggles of yore; it has damaged the credibility of civil activism. It has now caused people to see civil society activists and insurrectionists as mercenary opportunists who are waiting for a chance to be noticed by the government and rewarded with an invitation to join the plunder of the nation’s resources.

The third reason for young Nigerians’ mental break from their country is the forlorn hope they nourish that they would relocate from the country to a more prosperous, more secure, and more welcoming country in the near future. Survey after survey consistently shows Nigeria as the country with the highest number of people who desire to leave their country for another country.

For example, in a March 27, 2019 survey, Pew Research Center found that, “In Nigeria, Africa’s most populated nation, nearly half… of adults say they plan to move to another country within five years, by far the highest share among 12 countries surveyed across four continents.”

People who are resigned to relocating to another country in the near future will have a weakened commitment to their country since they see themselves as sojourners in their own homes. But the truth is that only a small fraction of people who want to relocate to other countries will be successful. That means the blithe unconcern to the solvable problems of the country that prospective exiles show will ultimately be counterproductive.

As many people have already pointed out, the vast amounts of money being mindlessly looted now by Buhari and his gang of criminals is borrowed money that today’s disconnected youth will have to repay someday. The Buhari regime is literally stealing and mortgaging the future of Nigeria’s youth.

The youth must snap out of their lethargy and inertia and reclaim their country. It is not an option. It’s a dire existential imperative.