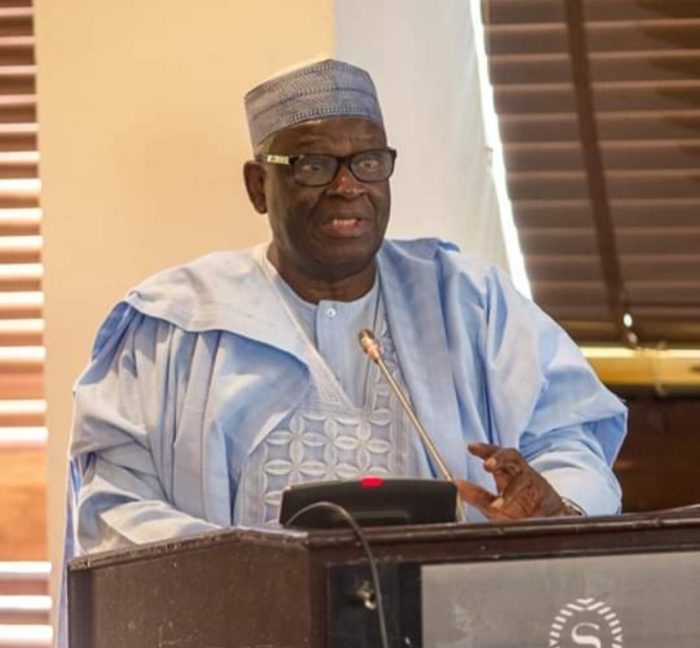 The announcement of Prof Ibrahim Agboola Gambari as the Chief of Staff to the President, Major General Muhammadu Buhari (retd.), a couple of weeks ago generated a lot of heated discussions in the media about the man, his thoughts, beliefs, comportment and philosophy. It is quite right for that level of attention to be unleashed whenever the President of the Federal Republic of Nigeria makes such a pivotal appointment. Public scrutiny is part and parcel of high profile jobs. It comes with the territory.

That said, the attention on Gambari has been too focused on his personality and his jaw-dropping CV, almost to the exclusion of the office he has been selected to superintend. A lot has been said about the position of the Chief of Staff to the President, but not enough is known about the weight of the office itself.

The aim of this write-up is to redress the balance, to turn the public scrutiny on the issue that really matters; filling of the vacancy for the most powerful (unelected) public official in Nigeria. No Senate hearings or confirmation, no horse-trading, no Parliamentary oversight. It is an appointment entirely in the gift of the President. It is an extraordinary exception to the rule within the rubrics of a federal system of government.

So much of daily life in this country quietly hinges on the decisions and/or indecisions of the Chief of Staff to the President. And, with President Buhari’s legendary phlegmatic approach to governance overall, Gambari is poised to become de facto ‘Prime Minister’ of Nigeria. This will be a cause for celebration for some, and alarm for others.

For those who might be wondering about a possible overlap with the position of the Secretary to the Government of the Federation, please worry not. The SGF is a statutory appointment made by the President of the Federal Republic of Nigeria under Section 171(2)(a) of the 1999 constitution. It is a civil service-track appointment. That of the Chief of Staff is a political appointment. Historically, the position started in America, as a Personal Assistant to the President after the declaration of independence in 1776, but has since grown in importance and influence to the point where, nowadays, the Chief of Staff is as consequential as the President wants him to be. It is not a statutory position.

There is no obligation (constitution or otherwise) to even appoint a Chief of Staff. In the USA, the position can be so volatile that it is often seen as a poison chalice. People do not generally last too long in the seat. Current US President, Donald Trump, for instance, is already on his third Chief of Staff in only his first term in office. President Jimmy Carter (1977-1981) even refused to appoint one for the first two years of his administration. In the Nigerian setting, however, the appointment is usually eagerly awaited, and the chosen one tends to stick around for the full hog. And, who wouldn’t? For us, the Chief of Staff is a man heard along the corridors of power, but not seen as much.

He is one whose odd smile, cough, yawn and eye movement speak volumes. One whose ‘candid opinion’ translates into order for government ministers of all hues. One whose utterances with the uniformed personnel carry the menace and force of the Commander-in-Chief himself. In short, when the Chief of Staff sneezes, others catch cold.

Think this sounds cloak and dagger-ish? There is more. The Chief of Staff is one who must feel comfortable in the boss’s shoes. One who, in the absence of Mr President, walks the walk, talks the talk and very much the shadow of his boss at the conference table. In a normal Parliamentary setting, the Prime Minister is the head of government whose powers are subject to the scrutiny of Parliament. Nigeria is, de jure, a federal system, but totally unitary in character and application. The Chief of Staff operates in the vacuum created by the country’s oscillation between a federal and unitary administration. It is a personal power, much more potent and encompassing because it is unencumbered by either parliamentary or political parties’ usual channels of restrain on the excesses of Executive power.

It is a most privileged fountain for a cerebral Chief, to perch and ruminate about the topsy-turvy, and drudgery of life in the saddle. In normal, calmer times, the holder of this office might not draw too much attention to himself, but in the feverish atmosphere of “marginalisation”, “restructuring”, “nepotism” “fraud”, “victimisation” and the like, beclouding public discourse in this country, the holder of the office willy-nilly acquires a special significance.

It should also be added that we live in pretty uncertain times in the world at the moment. The economic decline forced on nations by the coronavirus pandemic will require them to call on their best brains to navigate their ways out of the morass. It will require the deployment of the best diplomatic, economic and political skills to conduct and confront the difficult bilateral and multilateral negotiations in the coming months and years. Given that state of affairs, should Nigeria be alarmed by the appointment of a person with the pedigree of Professor Gambari, or should it be lauded as a welcome fillip to the Buhari administration?

Right in the twilight of his life, Gambari suddenly has the good fortune of being placed in a unique position to be the steady hand in the cockpit, as the country enters a potentially devastating turbulence for a significant period of time.

Sizable loss of revenue in all departments, shrink in the country’s Gross Domestic Product, pressure on the naira, massive international fluctuation of commodity prices, rising unemployment, downsizing of the manufacturing base, depletion of foreign reserves, just to mention a few of the immediate economic calamities facing Nigeria, and for that matter, all other countries to varying degrees, at this point in time.

He is a man who has been there, done that, seen nations in conflict as a neutral umpire in far-away lands across the globe. He is a man with significant personal accomplishments, but he has also had his low moments and the odd bumpy rides along the way. I am sure, he would be the first to admit to his own shortcomings and imperfections. But, hey, let he who has not sinned cast the first stone here and now.

The only notable flashpoint going forward is the inevitable clash with the Vice President, Prof. Yemi Osinbajo, who must now lump and live down the presence of the other Prof in his orbit. This will happen sooner or later when somebody has to hold the fort in a prolonged absence of the boss. If not carefully managed, any such clash would sink either or both of them in a jiffy.

Finally though, what Gambari needs above all, at this juncture, in what has to be the pinnacle of his illustrious career, is to leave a mark, and a legacy for posterity.

While he may continue to bask in the glow of the hooray, encomiums, and the kumbaya, that greeted his appointment in many quarters, he must also remain seized of the acerbic criticism, cynicism and scepticism it attracted in other quarters. He must not turn his deaf ears to those discordant voices. He must resolve to bring his friends close, and his enemies even closer.