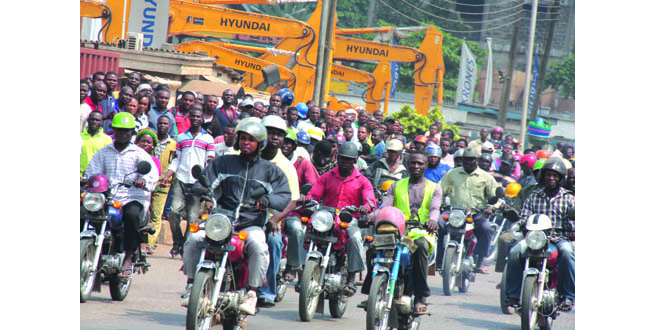 TWO anecdotes will do for a start. One, a personal encounter; the other an ex-governor’s lesson. I drove to an elderly person’s residence around Ogba in Lagos State, and parked across the street. I peered through my rearview mirror into a quiescent street. No car whirring towards me, no okada blaring. It was safe to open the door and step out. No it wasn’t.  The door ajar and before my left shoulder moved, my car vibrated. The driver’s door creaked and snapped at the hinges. I stiffened with knowledge.

A contraption had jumped over from the car door.  A motorcycle flying one way and two humans the other. It was a nightmare at noon, a humourless movie unfurling before me. My eyes devoured the scene without understanding it. Gradually as though a mist was clearing, I recognised a woman, a passenger, unable to rise from the ground. Between her chest and waist was a threat to my sense of peace: she looked pregnant. I hoped it was a biological disorder, a potbelly of sorts, a protuberance from an earlier birth, etc. I saw her before I heard her.

“What did I do to you?” she mumbled, tears coursing down her face. “Did they send you to me? I don’t know you. Do you want to kill him,” her hand pointing to her stomach area, and I knew she was pregnant and accusing me of wizardry at the same time. She was injured and bleeding. The okada rider was also on the ground, his feet also bleeding.

In a few minutes, the rearview mirror’s silent street had buzzed into a cacophony of okadas, and they surrounded me and my host who had seen the chaos. The two victims were taken in my car to a hospital. I was thankful that no one died, but the two suffered severe injuries. I picked up the bills. I became a hostage of the okada riders who thought this haughty, cold-blooded big man might manouevre an escape, and entrap the victims with the hospital costs. I did not only pay the bills for the day, I ended up monitoring and footing the bills of the pregnant woman until she was delivered of her baby. I was thankful she was past miscarriage, and both mother and child survived the noon of agony and mishap.

I also had to finance the okada rider’s livelihood and his family until he left the hospital. And I also provided the money to get a new machine, the accident having “allegedly” put his source of livelihood out of commission. In all, my gratitude was that a rugged act of commerce did not frog-march me to the court for manslaughter, especially charged with a foetal fatality. You can imagine the superstitious malignity of a stranger sent from the village by wicked in-laws to waylay an innocent woman in the city.

The other story was told by an ex-governor in the Niger Delta, who introduced Okada. He thought the banning was a conspiracy of elitist douches who did not care for the poor.  But before long, intelligence reached him that most of the riders did not know their ways around, and that the passengers had to direct the pilot. The reason? They came from Boko Haram country. The governor now had to ease them out quietly without giving reasons in order not to scare his fellow citizens. A policy for the masses was now becoming a trapdoor of mass deaths.  The second anecdote recalls a recent incident in the Southeast where the army arrested at about 3am dozens of red-blooded boys in a convoy heading from the north and identified as Boko H- aram recruits.

While many may gripe that the restriction on okadas may be anti-poor, they should realise that most of the victims of okada have been the poor. Okada itself was an accident. No one plotted for it. I recalled a visit to Uyo in the early days of Akwa Ibom, and I baffled that it was a means of mass transportation. Gradually, it infected the country, from city to city, until it hit the megacity. The humble taxis that took care of movement dissolved and were replaced by elite “drops” and car hires. In a sense, okada elitised transportation. We could also argue that a few other factors brought it here. One, infrastructure deficit. Two, fewer buses. Three, a teeming population. All of these point to a poor policy, especially during the military. Okadas are a military legacy. One of the scars from the era.

But the issue is clear. These motorcycles do not belong to mass transit in a megacity. They are not part of a modern world. It is a backward policy to have them in an age where mass transit and highways define the nerve centres.

The BOS of Lagos, Babajide Sanwo-Olu, decided that it was not to cover the whole city. But the major arteries have to be protected from the menace.  Again, it all started with the then governor of example, Babatunde Raji Fashola, SAN, who spent resources impressing it upon Lagosians that okadas did not enhance the city. It was a source of crime, and a harbinger of deaths. He unveiled reams of films telling of ghastly sights of accident victims in the city.

It is easy to blame it as a dig at the poor. The rich and car owners have had to use it too, especially when enmeshed in go-slow. Some use it when trying to catch their flights. Such moments will haunt car owners, too. But we are either a modern city or a surrender to the past. Accepting okadas and Keke NAPEPS is a caving in to underdevelopment. It subverts a ride of progress to the future. It is what former U.S. President George W. Bush calls “the soft bigotry of low expectation.”  Okada does not belong to the future. As a sportswear says, “The future is coming, go forth.”

Okada, in this age, pays ‘lips service’ to modern transport. Some have said the riders can be registered and organised, and that would help. The organised ones were like the rugged, ragged riders we loath.  The only difference was that they had a corporate identity. They were as much ruthless in speed and manoeuvres in narrow and broad streets.

In modern societies, the motorcycle is for dispatch services, and at that often well-organised. The other use is for recreation, the Harley Davidson culture. It also fits into the alternative society of rugged men and women riding on highways. Their machines feed the egos of muscle men with their throaty roars and vibrations. The machines are big, turbo-charged, with tyres like biceps.

But here it is about Naira and deaths. Some of the riders left their normal jobs and thought okada a money spinner. They did not contemplate its odds and ends. The Governor has rolled out buses and more are coming. Work is on with infrastructure. It is one thing for the people to move in a city. It is quite more important to be safe while doing it. Okada is not like the autobiographical fiction titled: Zen and the Art of motorcycle Maintenance by Robert Pirsig, in which a ride is not rough-and-tumble but a tranquil rumination on life. You cannot focus on peace in an okada the way you can in a bus.

Sultan and Plateau day of forgiveness

THE Sultan of Sokoto hit the bull’s eye in Jos last weekend at what is described as a day of forgiveness in Plateau State, the second year since Governor Simon Lalong set it in motion.

In the spirit of the day, the Sultan Abubakar Saad III, warned against the media war of recrimination between Christians and Muslims over the sectarian killings in the country. It is time we focused the blame where it belongs: the incompetence of the security forces.

It is not whether we weaponise hate between faiths but whether the killings stop. We cannot stop them on the pages of newspapers or through social media maelstrom. Billions go to the army in the budget to stop the killings, including Boko Haram, yet we see the country falling to the bloody spasms.

A pastor that riles its followers does not help the cause of peace or Christ, neither does the Muslim cleric with messianic bile.

The president did a good thing to write for Christianity Today, a respected journal in the United States. But those who wrote it for the president should have understood that it did not help the president to bandy statistics on what percentage of Muslims died in the hands of Boko Haram.

How did they arrive at 90 percent in a country where no statistics is sacred? The article backed its context with anecdotes about Chibok girls and other Boko Haram raids as though they amount to any scientific data.

It was enough to say both Christians and Muslims have been victims. The article however was, for most part, well-worded and brilliant. Next time, his advisers should let more balanced inputs before publication.