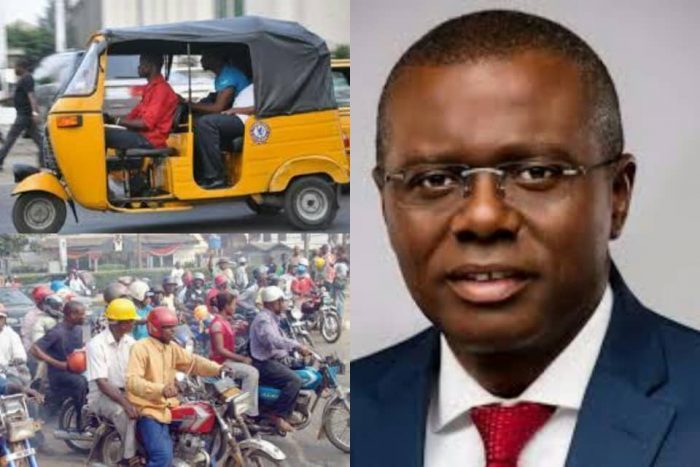 Beginning from last Saturday, Lagos State placed a ban on commercial motorcycles (okada) and tricycles (keke) in 15 local government areas. The development has further impeded movement around Lagos, a city already plagued with some of the worst traffic gridlock in the world. With the perennial issues of congestion and mobility, Governor Jide Sanwo-Olu faces considerable problems in the administration of Lagos State. He has been throwing up solutions, but none appears to stick. Shortly after he was inaugurated, he signed an Executive Order directing LASTMA to run at least two shifts and work till 11 pm. After that, he came up with crazy fines as the penalty for traffic violation offences. Now, his latest genius is banning okadas and kekes. His efforts in tackling the problem are appreciated, but Lagos’ problem is complicated. It requires complex solutions.

First, I think Sanwo-Olu should reverse the ban in the meantime. The decision is too abrupt and does not go far enough to tackle the problem at stake. Okada and keke vehicles are, undoubtedly, a menace, but a governor waking up to pronounce a unilateral ban is a problem in itself too. This is no military era where people’s lives and livelihood are regularly subjected to the whims and caprices of a hungover dictator. Nigerian leaders should not be encouraged to turn bans into a nostrum and hastily deployed towards knotty situations. Lagos lacks adequate infrastructure and is frequently overwhelmed by its teeming population whose activities stretch the limits of available resources. Rather than an immediate ban, he should work towards a phased withdrawal that carries stakeholders along at every stage.

According to government officials, the ban was necessary because those vehicles pose security risks to city residents, and their activities drive up the rate of vehicular accidents. It is possible that was indeed the motive, but I am not convinced that that is all there is to the ban. Just last year, an All Progressives Congress stalwart, Joe Igbokwe, generated some controversy where he stated, “Instead of partnering government on the BRT, you invested 5.3 million dollars in okada business and expect that Lagos State will allow you jeopardise its multi-billion naira mass transit investments.” If we go by that statement, we can conclude that the Lagos State

Government under Sanwo-Olu is throwing those who invested in the transport sector in Lagos under the bus so they can monopolise the trade. If that was what their plan all along was, why allow those businesses to berth in the first place?

Truly, since the ban decision was announced, people have lamented the implications it would have on motorcycle hailing companies like Gokada, Opay, and MAX who will lose their investments because of the policy. The companies’ situation is indeed worth considering. They invested millions of dollars, and it does not bode well for them if the governor just swipes off their efforts just like that. How do you sell your city as an investment destination, then act erratically like this? That attitude is a huge turn-off for future investors who will consider Nigeria too unstable, and its government too frivolous to be reliable.

Beyond the pain of those bigger companies is the concern for the smaller guys. Out there are people who took loans from cooperative societies to buy those vehicles, and their repayment plan was planked on the daily proceeds they generate from those vehicles. Now that they have been banned, where do they go from here? Is the government considering compensation for them, or will the governor leave them to their tough luck? These are people who are already vulnerable, and are barely clinging at the bottom of the economic ladder, why further impoverish them?

Since Saturday, Lagosians who have previously relied on the services of these vehicles have resorted to walking miles and miles to get to various destinations. That kind of activity is neither a pleasant nor productive task. In an already disorganised city like Lagos, where life is already typified by the stress of access, to be stranded is another level of needless hassles. What did Sanwo-Olu think would happen when those vehicles are gone? Did he factor in the costs that are now being incurred as a consequence of people wasting valuable man-hours on extended treks?

In principle, I am not against the ban on those vehicles themselves, but the timing and the execution of Sanwo-Olu’s decision. I believe that okadas and kekes have to go at some point. They are an urban nuisance, an ungainly sight, a blight, and an ugly blotch on Nigeria’s botched landscape. Those vehicles desecrate spaces and painfully highlight the un-citiness of our cities. Their insistent existence in all cities throughout Nigerian is a testimony to our multidimensional poverty, urban degradation, and lack of administrative foresight and imagination in the planning-and the execution-of spaces and places. But the fact that they are proof of our cultural failures does not mean they can be tucked away with a fiat. We have to face up to the fact that they exist because legitimate problems beg to be solved. If we had well-planned cities with mass transit, and gainful employment had not become a mirage for a youth-full generation, those vehicles would not be popular. If Lagos State does not restore those vehicles, they will evolve in another form soon.

I acknowledge that Lagos State is promising that they will enhance mass transit and ease transport troubles. They claim they have 65 buses coming already, and another 550 are in the offing. If that is true, then they might not have fully apprehended the full scale of the problem. Adding an extra 600 plus buses to what already subsists in an over-congested Lagos will compound the problem. Lagos does not need more vehicles; it needs more-and better-paved roads, urban restructuring, and prompt (and proper) maintenance of facilities. They also said they are opening up waterways with 14 ferries. That is a start, but the figure is far too inadequate, and the enterprise not yet established for the Lagos government to treat their plan as a viable alternative yet. Banning okada and keke ahead of those initiatives is not helpful. They should have developed a plan that increases mass transit while simultaneously decreasing the okadas and kekes until they are finally phased out.

Finally, supporters of the total ban on keke and okada claim that the non-jobs of driving those vehicles lure young people from far more empowering and much-needed vocations. That is true, and it is because they bring relatively quicker gains. The supporters of the ban assume that if the options of okadas and kekes are withdrawn, those affected by the losses will be pressed to take to vocational training. The argument looks tenable, but it remains a non-solution. The socio-economic reasons that made vocational training unpopular enough for okada to become a career in the first place are still with us. Some of those okada and keke riders are either graduates of various institutions or they have been through apprenticeship systems to learn one trade or the other. They have various skills; they just cannot find the means and the social access to use them.

To redirect people away from okada and keke riding and orient them towards more useful professions, the government needs a different plan, one that concerts and concentrates efforts on that mission. They can, for instance, consider sponsoring people’s training and paying them stipends while they are at it. After training, you can help them access loans and resources to set up their businesses. As they succeed, more people will be motivated towards pursuing that end. The reality of Nigeria, as it stands, is that we could run a million people through those vocational schools to learn trades such as house painting, plumbing, mechanical repairs, and so on, but they will eventually return to the streets to ply the okada/keke trade when they cannot find gainful employment or set up a profitable enterprise. As long as okada/keke assures the rewards of a quick buck, the riders will rather fritter away the most productive years of their lives on it than wait for customers that might never show up.