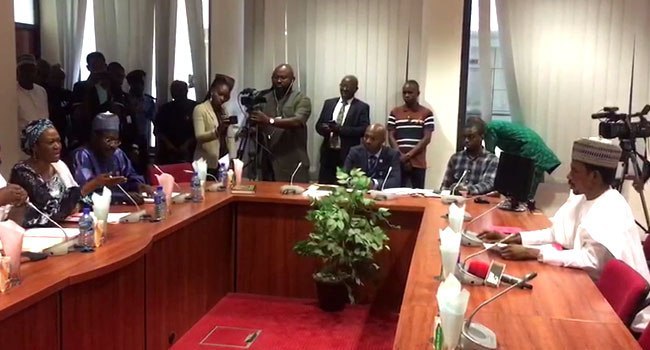 Senator Elisha Abbo on Tuesday told Sen. Oluremi Tinubu and other members of the Senate investigative panel hearing his alleged case of assault of a nursing mother not to threaten him with suspension.

The senator spoke when he appeared before the six-man panel set up by the Senate to investigate him.

The News Agency of Nigeria reports that President of the Senate, Dr Ahmad Lawan set up the panel which is headed by Senator Sam Egwu (PDP-Ebonyi) on July 3.

Abbo who appeared before his colleagues at exactly 3.15 p.m., told them that the matter was already before the court, hence he would not make comments that could amount to prejudice of the Court process.

He also refused to allow the clerk of the panel to put him on oath, as is usual practice.

Drama started when he said that he had no business appearing and making comments about the matter anywhere.

But Abbo said his presence was out of honour for his colleagues.

Senator Oluremi Tinubu who is also a member of the panel expressed displeasure over Abbo’s comment before the panel.

She said, “The Senate of the Senate carefully selected members of this committee to hear your own side of the story which has gone viral.

“What we are doing here as a legislature is a position taken by the Senate to hear from you and others involved.

“This matter has affected the Senate as an institution and we have been mandated to investigate it.

“You can’t sit there on the other side and dictate the modalities and approach we follow as a committee.

“We are trying to protect the Senate and hear from you, but we can also suspend you because of your attitude.”

At this point, Abbo flared up and said he won’t allow the committee to threaten him with suspension, having earlier informed it that the matter is before a court.

“Dear colleagues, I won’t sit here and allow this committee to threaten me with suspension.