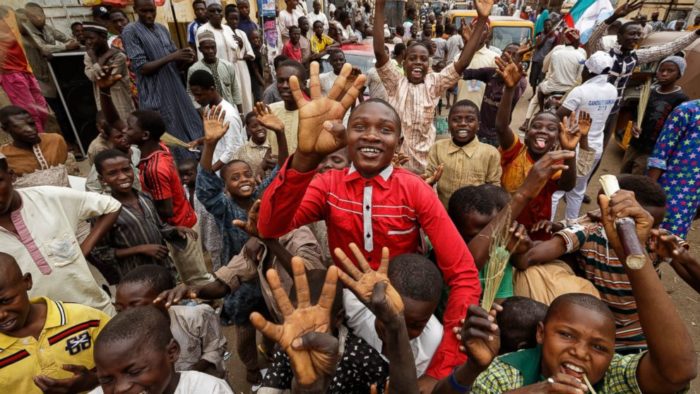 The North has made its choice with the election of General Muhammadu Buhari for another four years. The difference between Buhari’s votes and those of Atiku Abubakar is 3,928,869. Out of that figure, the South West’s contribution is 259,780. What percentage is that?  The three zones in the North contributed more than 80 percent of the balance. I don’t want to join those who point at the huge votes from desolate North East towns and villages as proof of rigging. The fact that what the opposition called a heist passed without a whimper from that crimson corridor meant it enjoyed their popular acceptance. The jubilant North and the reluctant South must therefore brace up to live with what Buhari himself has described as the “tough” times of the next four years.

I watched video clips of Northern youths celebrating Buhari’s victory. They had cause to be happy, he is their daddy. I saw in their hands daggers, I saw sticks and I saw deadly, apparently junkie road shows. If those were the face of the future, then there is no hope. But could they really be better than they were in those celebratory acts? They are the reeds of the desert, short in growth and abrupt in promise. But why is it impossible to educate them and make them whole? Which one is more desirable and profitable: register millions for school certificate exams or register millions of out-of-school, underage kids as voters? Out of the 71,294 candidates that registered for the 2018 National Common Entrance Examinations into the 104 Federal Government Colleges, Zamfara State contributed only 28. Again, only 24 candidates from that state passed the October/November 2017 NECO exams but it was very convenient for the state to queue almost half a million voters behind Buhari ten days ago.

There are 13.2 million out-of-school children in Nigeria. I do not have to hire the United Nations before I know that more than 70 percent of that figure belongs to the North. I do not need any prophet to tell me what those uneducated kids of today will become five to ten years from now. I know it is not a Buhari problem per se. I know it is a historic, systemic problem from which Buhari himself managed to escape decades ago. But he has been president for four years and he is not on record as having moved against the scourge beyond harvesting the kids on election days. We need someone to tell Buhari that that persistent northern fever is at the root of Nigeria’s paralysis. Those jubilant young men on Northern streets need education but how do you discuss freedom with one whose idea of paradise is the dictionary definition of hell?

Nigeria is sick but the illness may not be terminal if the North is aided out of its deep illiteracy. Even in its most perverted form, education adds value. That is why our commercialized democracy pays N500 for a vote in the North West but pays N5,000 for same in the South West. The ones who do not know and won’t ever know what western education means are the Almajirai. Their repugnant vagrancy and social nakedness are no longer a Northern problem. Apart from the reality of their voting in elections as a captive electoral audience, they give security concerns too. The South, today, lives in fear of the influx of the street from the North. On every corner, on every street in the South, in every unoccupied, even uncompleted building, the escaped northern youth is there, struggling, searching for hope. It is scary.

So, those who believed in and worked for Buhari’s reelection should tell him that the nation may not need more than only one agenda from his renewed presidency. Buhari may not build roads and rails. He may not do power – if he lacks the energy to do it. He may lock up Tradermoni in the Villa’s refrigerator. The only one thing he must not fail to do to save Nigeria is taking the children of Nigeria, particularly kids of the North, off the street. Buhari, the one who was here yesterday, today and has just won tomorrow must let the street kids of Northern Nigeria know that they are suffering and that they are a threat to the society itself. We have seen it with Boko Haram and how it recruits its foot soldiers.

Buhari should see in the boys and girls of the North more than firewood to cook elections. They deserve to live and live well. They cannot live well in chains and won’t let the South exist without fear unless they are helped out of their Plato’s cave. No boy would trek with cows from Kaura Namoda to Lagos if he is educated and knows that a ranch around his village would yield better. If no cow moves on foot from the northern borders to the Atlantic, there won’t be devastation, tension and death in clashes between herdsmen and farmers. When you send the Northern child to school and give him job after school, terrorists won’t have fresh hands to recruit. In the absence of fighting hands, Boko Haram and its banditry variants across the North will dry out. When we get rid of these elements, the billions we spend on arms, on ammunition and on feeding the displaced will be channeled to productive projects and ventures.

I know that no captor, no slave owner wants the captive free. I know that the day the fool gains wisdom is the day the wise loses his power. But since Buhari no longer needs the Almajiri as the tap root of his electoral power, he should use his last years to assist all of us by taking his ‘boys and girls’ to school. It will help the future of Nigeria if the North gives us men and women who have competence and knowledge to contribute to the national asset pool.

We just had an election in which the two major candidates were northerners. An election conducted by a president who is from the North and by an INEC chairman who is also from the North. These men just gave us a challenged presidential poll closely guarded by security chiefs all from the North. The North, through this election, has told us clearly that it owns the yam and the knife of Nigeria. It should therefore learn to be a responsible husband, doing things well and tidying up properly going forward. I would have said that we need an educated North to give us a believable election in 2023 but my friend would counter that. My friend would say 2023 is too soon for our unprepared North to do right. So how long should we wait for the North to be ready for excellence? This 2019 stuff is sick and sickening. Was it INEC’s incompetence or pure mischief that figures in our 2019 presidential election became problematic? The figures announced by Professor Mahmood Yakubu are these:

Did INEC not tell us some hours to the elections that it registered a total of 84,004,084 voters? So where did it get the new number of 82,344,107 as our total registered voters? What happened to the balance of 1,659,977 voters? Did they vote in that election and if they did, where are their votes? Or they died before the elections or they went on exile renouncing their citizenship? Or they reside in Sambisa forest where there were (are) no polling booths? What happened to them?

Again, why did INEC announce different figures for accredited voters and for total votes cast when all of us who voted saw clearly that voting and accreditation were done simultaneously? INEC said accredited voters were 29,364,209 and total votes cast 28,614,190. Between those two figures are 750,019 voters and their votes. What happened to them? Or did INEC give ballot papers to these almost a million persons who took the ballot papers home instead of dropping them in the ballot box? Then there is the huge number of rejected (cancelled) votes – 1,289,607 (4.5percent of total votes cast). What explanation has INEC for these? Or, again, is it too much to demand reasons for the wasted efforts of millions of our compatriots?

Above all, if you have Buhari’s ears, tell him to help us by educating the children of the North. They should not be useful only on election days.

The Sunday Igboho I Knew – By Babafemi Ojudu

Tuchel to replace Lampard at Chelsea