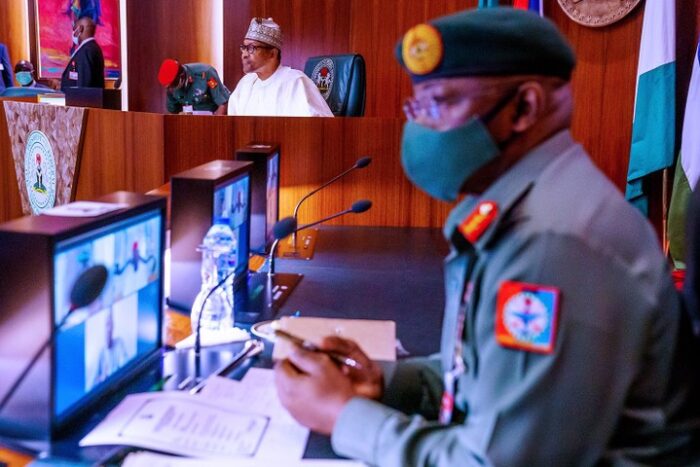 Judging from the opening quote in which the Governor of Niger State, Abu-Bakr Sanni Bello, raised the public alert that the dreaded Boko Haram has occupied several communities in the state, it is barely possible for anyone to play the ostrich anymore. For those who may not know, Niger State is contiguous to the Federal Capital Territory Abuja, a mere two hours’ drive away. One does not have to be an expert in military strategy to grasp the ominous implication of this recent triumph of the sect and its positioning right beside the nation’s heartbeat. This perhaps explains the raw upbeat mood of the National Assembly when it met on Wednesday with Senator Opeyemi Bamidele exclaiming that, “I do not believe that the nation’s President, Major General Muhammadu Buhari (retd.), is aware of what is going on.”

Interestingly, a nongovernmental organisation, The Chandler Institute of Governance, based in Singapore released this very week a governance score card, ranking 104 countries on government capabilities and outcomes. Sadly and regrettably, Nigeria was rated number three position from the rear. Some of the indices employed by the institute include leadership and foresight; strong institutions; attractive marketplace; as well as global influence and reputation. Is it not strange that even the state governors are claiming that they don’t really understand what is happening, having made several intercessory appeals to the Federal Government without getting results?  As Bello put it, “These are what I have been engaging the Federal Government on, unfortunately, it has now got to this level”. Obviously, in more effective federations where federalism is not taken to mean an overpowering centre controlling unviable mini states, state governments would not have been so helpless in dealing with the invasion of a foreign adversary. It should also be noted that part of the escalating insecurity derives from, as this columnist has persistently argued, the virtual absence of governance in many of these agrarian communities. Having said that, it is difficult to believe that the central government will find it hard to grasp the character of the threats which the current perilous conjuncture, with people being killed in droves, daily poses. In other words, the accumulation of power at the centre should attract corresponding responsibility for the safety and well-being of Nigerians.

True, the military boys have in several cases, despite their under-equipping, heroically stood against the insurgency in the North-East. But as Buhari himself once told the former service chiefs, their best has not been good enough. If we go back to the indices employed by the Chandler Institute, we come across leadership and foresight in which Nigeria was ranked extremely low. This writer has consistently drawn attention to our inability as a people to plan for the future. Recall, for example, the statement once made by a virologist and World Health Organisation Consultant, Prof. Oyewale Tomori, to the effect that our efforts at combating the COVID-19 pandemic can be likened to manufacturing equipment on the battlefield. That metaphor applies very much to the current struggle and warfare against the alarming insecurity ravaging the land.  Too often, we are  discovering  too late that hostile forces have outpaced us while little or no attention is paid to advanced intelligence that would have forewarned or made us battle-ready .

Recall, for example, that a former governor of Zamfara State, Abu-Bakr Yari, revealed to a shocked nation some two or three years back that the bandits who held the state by the jugular were formidably better equipped than our military. Not that alone, one of his officials,  a  university professor,  said  at the time that they had written copiously to the Federal Government concerning the galloping insecurity and military buildup of the bandits, but without getting results or responses. Unsurprisingly, many wondered at the time how bandits could engage in such a steady accumulation of might and weaponry in one of our states without anyone who matters crying foul or more importantly do something about it.

Talking about leadership, The Nation columnist, Tatalo Alamu, recalled nostalgically in a recent tribute to the late Chadian strong man, Idriss Deby, how Buhari, 38 years ago drove himself and the 3rd Division of the Nigerian Army deep into the Chadian territory to deal decisively with troublemaking terrorists in a display of military valour.  Alamu’s notable premise concerns the changes that have overtaken the Nigerian military and Buhari in the intervening years between then and now. Argued Alamu: “At that point in time, Nigeria could boast of an Army with three well-provisioned and well-armed divisions making up arguably the sleekest fighting machine in the whole West Africa”.

Undoubtedly, one of the unanswered questions of Nigeria’s current travails is, old age apart, what else explains what would appear to be a remiss posture on the part of our leadership in the protracted struggle against insurgency and banditry. To give a personal example. In my early 20’s as President of the University of Ife Students’ Union, I championed an anti-military protest which included the call for “a long trek” from Ife to Lagos, the seat of power at the time. Much older now, I am unlikely to exercise that kind of exuberance, nonetheless, the values and vision I stood for then abide with me and the posture of this column, I dare say, could have been predicted by the struggles of those years. That is another way of raising the query and puzzle of what appears to be a conflict between the General Buhari of those years and the politician of these times. To put it up front, why are we not witnessing more resolution, more military triumphs, more intelligence gathering, better responsiveness to complaints and surging banditry than is the case now? This, I believe, is the essence of Bamidele’s troubled and troubling remark that he doesn’t believe that Buhari is aware of the nation’s current plight.

At the beginning of his tenure, Buhari correctly identified insecurity as a pivotal governance problem. He went on to pursue the agenda vigorously to the point where the government spokesperson could say that Boko Haram had been “technically defeated”. Obviously, the gains of those earlier years have been reversed to the point where Boko Haram is seizing communities very close to the seat of government.

All is not lost however. The option of foreign mercenaries, once scoffed at is now looking more and more inviting as security institutions are being overwhelmed. There is really no need to declare a state of emergency on security, what is required is a strengthened capacity of our military and police, ensuring value for money in terms of military spending. Additionally, we need to locate under what terms external assistance would be most rewarding. At any rate, we must move a tormented nation out of the current terrifying valley of serial killings.