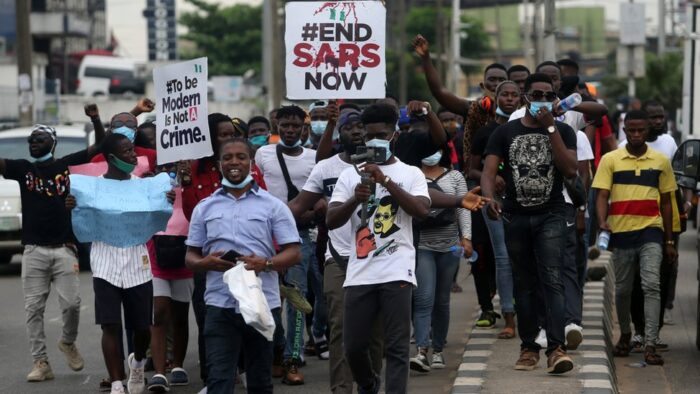 Another round of #EndSARS protests?  No. Not again. But in parts of the country, Osun State in particular, some protesters peacefully marched to the State House of Assembly in Osogbo Monday this week armed  with a motley of new  demands and incoherent observations while Lagos and Abuja police commands effectively blocked the planned protest.
It is an awfully wrong time for  #EndSARS Part TWO protest either as a remake of the old horror movie or even another brand new protest, though I agree that   grounds for protests always exist in this season of discontent. And the grounds include but not limited to  the latest massacre of 43 innocent rice farmers in Borno State by Boko Haram; they include especially in the North activities of bandits of all shapes and sizes, without any form of ideology or any method in their madness that  have turned that region into what Sultan Muhammadu Sa’ad Abubakar described as the most dangerous place  to live on earth. There are plenty of other reasons to protest but the time is not right.
Protests, peaceful or violent, can only aggravate the insecurity problems in the country and the outcome, as in Frederick Forsyth’s Devil’s Alternative,is bound to be bloody and possibly fatal with all of us, both the government and the governed, ending up as  losers. New protests? No Not now.
It is only two months ago that the #EndSARS protests broke out almost spontaneously across the country. The protests had limited objectives – get rid of the Special Anti-Robbery Squad – but it  had a lasting impact. SARS has since been dead and buried.  For the youths, therefore, it was an unprecedented success. They conducted themselves decently and peacefully  as they made their demands known to the authorities.
And without much ado, President Muhammadu Buhari,  responded positively  to their demands and, as if he was on cue, ordered that SARS be disbanded. It was immediately disbanded. But, contrary to expectation, the protests did not end. Buoyed by their initial victory, the protesters could not resist the temptation of shopping for a longer list of discontents, almost as if toeing the line of meddlesome politicians.  And so, their victory party was billed to last almost forever until some elements of the Armed Forces intervened forcefully to disband the protesters at the Lekki Toll Gate with unsavoury outcome.
The country  and  the international community  have not gotten out of the shock occasioned by the egregious  destruction to public and private properties and the bloodletting that accompanied  the protests especially  after some   assorted hoodlums with diverse objectives had hijacked it.  Similarly, the police which bore the major brunt of the protest  have yet to recover from the psychological trauma. Many police stations were set on fire and the hoodlums killed many of their personnel. There are losses and tales of woe  on all sides. Relatives of  dead victims of SARS brutalities have their tales of woe to narrate and for them it will take  like forever  to put  this personal tragedy behind them.
As part of the efforts to get to the bottom of this maelstrom, government  ordered judicial panels to probe the entire protest and its bloody aftermath. The panels have up to  six months to complete their assignments, some clear five months from now.
But beyond the temptation to  prevent  the gains of #EndSARS  from  quickly going to waste, there  is no reason for the youths now to resume the protests or start another round.
Apparently some Fifth Columnists in or close to government who were minded enough to put a spanner in the works, prodded the government or some of its agents to take abominable steps that were inconsistent with the President’s well-known public stance.
The President, it bears repeat, took steps even at the height of the SARS protest to douse its fire by giving in to their demand, not out of fear,  but out of conviction that the youths had a right to peaceful protest and the police reform was long overdue. But the do-gooders almost immediately went to work. They started to arrest some known faces of the #EndSARS protest, got the Central Bank to freeze their accounts and place travel embargo on some of them.
Some of  the fifth columnists even stand accused of hiring hoodlums to clash with the protesters while it was in full swing to cause mayhem and destruction. And we have had plenty of  mayhem and destruction to last us for long.

And as if the Police High Command was not privy to the decision to set up judicial panels to  probe the disturbances as part of long term measures for reform and confidence building in the Force, a legal officer in the Police Force went to file a case in court to stop the sitting of the tribunals.

Good enough that the Inspector General of Police, Mohammed Adamu, quickly disowned the attempted court case. It would have gone on record as  some of the inconsistencies which give the impression that government cannot be trusted.

But governments need public confidence to govern effectively and successfully. In doing so, it must do away with the mindset that doing the right thing may be mistaken to be a sign of weakness. In fact, the contrary is indeed the case. Doing the right thing at the right time gives government credibility and creates in the mind of the public a picture of the required strength  of character and the audacity of vision.
It therefore amounts to an act of folly for government to  take one step forward and two steps backward, the characteristics of bad administration all over the world. Which makes it necessary to end this intervention with the immortal remarks of Barbra Tuchman in her book, The March of Folly in which she queries “ why do holders of high office so often act contrary to the way reason points and enlightened self-interest suggests? Why does intelligent mental process seem so often not to function.”

Why? Why? Why? May be one day we shall find an answer. For now, it is only wise and appropriate to stop all protests – peaceful, constitutional or even violent. Police reform, one of the key demands of the protesters, is not like a tea party. Nor is it  a process you start in the morning and complete at sundown.

Beyond the temptation of playing to the gallery, the protesters have no new point to make. They should stop their fire while the ovation for them is loudest.