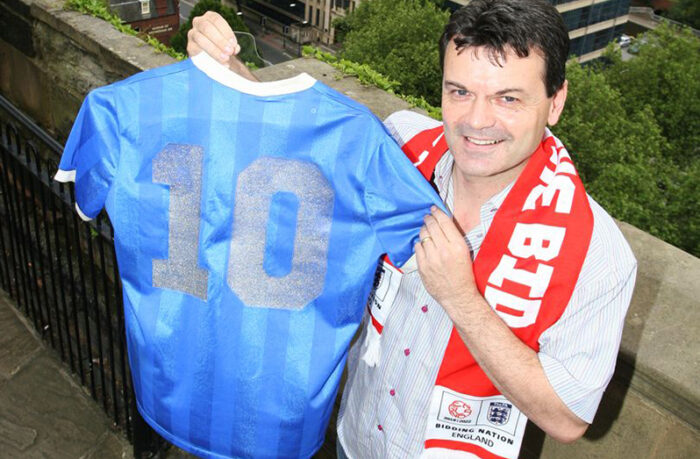 Former England midfielder Steve Hodge says Diego Maradona’s iconic shirt from the 1986 World Cup quarter-final is not for sale after an “uncomfortable” week fending off calls and dealing with “disrespectful” rumours following the Argentine’s death.

Hodge swapped shirts with the legendary midfielder at the end of the famous match at the Azteca Stadium in Mexico City and it is now on display in the National Football Museum in Manchester.

“I have had it for 34 years and have never once tried to sell it,” Hodge, 58, told BBC Radio Nottingham. “I like having it. It has incredible sentimental value.

“I’ve had people knocking on my door non-stop and the phone’s constantly ringing from every TV and radio station, and even foreign stations.

“It has been uncomfortable and it hasn’t been nice. I have seen articles on the internet and there has been a bit of flak flying around saying I wanted a million or two million and am hawking it around for money.

“I find it disrespectful and totally wrong. It’s not for sale. I am not trying to sell it.”

‘I have never blamed him’

Maradona, widely regarded as one of the best players to have ever lived, died at the age of 60 last week after suffering a heart attack.

His ‘Hand of God’ goal put Argentina 1-0 ahead against England in the last eight of the ’86 World Cup. Maradona’s second goal, at the end of a mesmeric run from his own half, made it 2-0 – and Argentina held on for a 2-1 victory.

Hodge, who played for Nottingham Forest for a total of eight years over two spells, as well as Aston Villa, Tottenham and Leeds United, now works as a pundit and is a regular co-commentator on BBC Radio Nottingham.

He had a close-up view of the good and the bad side of Maradona playing in front of around 115,000 people that day.

“Yes, he hurt us in 1986 and that will always be there,” Hodge said. “But from every corner of the globe he was respected and people appreciated the genius he had. That game will never be forgotten in the history of football.” 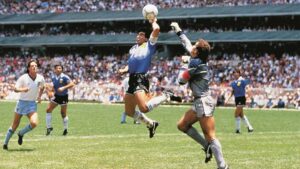 “I have to say I have never once blamed him for the handball. Not once,” Hodge added. “It was out of order but people who play football know that you try things now and again.

“It was a big-pressure match and he took a risk. Thierry Henry did a handball a few years ago and got away with that one. On big occasions when the stakes are high – and this was monstrously high having had a war four years before that – he took a gamble.”

Hodge was the man who played the ball up in the air towards keeper Peter Shilton, a backpass which Maradona famously punished.

“It was flicked back, it wasn’t sliced horribly. I caught it perfectly,” Hodge recalled. “And I turned around thinking Peter could come out and catch the ball, but he appeared from nowhere.

“A striker will normally slow down with a big keeper coming out thinking he might get hurt, but Maradona didn’t. The bravery to take on a 6ft 1ins keeper when he was 5ft 5ins showed he didn’t give a damn.

“He was as brave as a lion. He used to get kicked to ribbons everywhere he played.”

But no-one, Hodge included, could do anything to stop the mercurial Maradona on the way to scoring the ‘goal of the century’ in the same match.

“And I had the privilege of being five yards behind him all the way for the second goal,” Hodge said. “What a player. He was just a genius.

“People say to me, ‘why didn’t you sprint back?’ Well, it was an hour gone and if you are several thousand feet above sea level and you have made a run forward, trust me, you cannot get back. There was no air in my lungs.”

Maradona – a man from ‘another planet’

The game in Mexico was the second time Hodge had the “pleasure” of sharing a pitch with Maradona.

The first time came with Forest in 1983 during pre-season when the two-time European Cup champions faced Barcelona at the Nou Camp – a match played after a “proper downpour”.

“The game was basically played in a quagmire,” Hodge said. “They couldn’t cancel it because there were already 100,000 people in the stadium.

“We were a good team then and were always top two or three in the First Division and when you saw someone like that come along you just realised, ‘wow, this guy is from another planet’.

“Players would normally try to dribble the ball through the water or pass it with firmness. He was was flicking the ball up with his left foot, not once or twice but two, three, or four times, looking up and volleying it around the Nou Camp.

“His ball mastery was just incredible.

“For a kid like me, who was 21 at the time, I thought I was useful but this guy is far more useful than me. It was a reality check.”

As for the memento from their next meeting, the ’86 shirt – a souvenir which marks the pinnacle of Hodge’s career – he stresses the point that it is not for sale.

“One day in the future one never knows,” Hodge added. “But I have never once tried to sell it, and definitely not at the moment.

“If you ever want to go and see it, it’s in Manchester.” 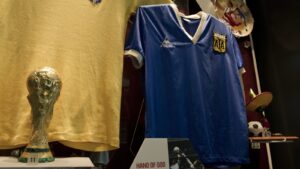 Maradona’s jersey in a Museum in Manchester