Home Columnist A letter to Theodora – By Obadiah Mailafia 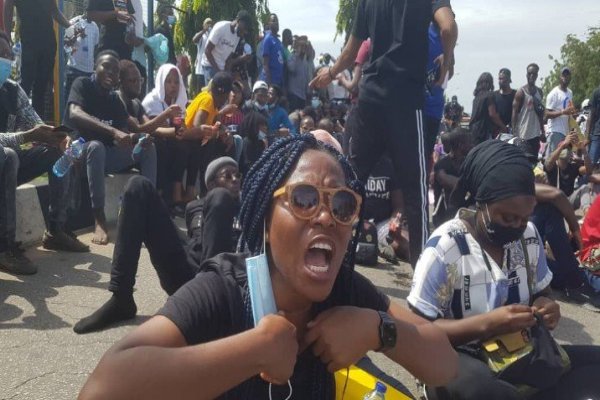 This is an imaginary letter to my adopted daughter. She’s unfortunately in no state of mind to read it. But I have written it to come to terms with what she has had to go through. Not too long ago, we met through some strange rendezvous with fate. Those who understand these mysteries would call it synchronicity. I adopted her as a daughter of destiny. Everything I have written in this letter is factual. I shall call her Theodora, to protect her real name. Otherwise, everything about the story is factual in every material particular. Her story represents the pain, travail and suffering of youths in our country today.

I hope this letter meets you in a mood in which you can read it. I have been heartbroken since I learned you were admitted into the Neuropsychiatric Hospital in Kaduna last week. I have been deeply worried for you – for your beloved mother and for your younger brother, Jacob. Forgive me that I have not been able to be there for you in person. I hope you will understand my current predicaments. I have had to remain “underground” following the series of events that you already know about. I know how worried and protective you have been about me. I long for the time when the storm will subside and I shall at last be free to visit you and to look after you as best as I can.

My Precious, I did not ever realise that the chain of events that followed one another in the last couple of months will lead to this sad denouement. Child, you have gone through so much! My heart melts for you. Every single one of your silent tears breaks my very heart. I long to hold you and to dry your tears. I long to see you smile again, which has been rare in all your 21 years of existence. I want your dimpled cheeks to break with laughter again. I long to see your heart burst with joy in a way it had never done.

You were born in the village of Rafin Roro on April 20, 1999. Rafin Roro is a small village in the Kasuwan Magani District of Kajuru Local Government of Kaduna State. You belong to the Adara people, one of the noble tribes of Southern Kaduna. You belong to the great Nok civilisation that flourished for a thousand years, with roots traceable to the Egypt of the Pharaohs. You belong to a noble race that was never conquered by the Fulani Jihad.

Your father, Katuka Musa, is a builder by profession. He married your mother, Rachael, when she was barely 16. She was an orphan who was raised by relations who treated her rather badly. Your mother suffered much abuse as a young woman growing up in the village. When your father sought her hand in marriage, she saw it as the opportunity to escape from her miseries. The first few years of marriage were full of bliss. Your elder brother, Mark, was born in December 1996. You came during the Lenten Season of 1999. Your sister, Benedicta, was born in September 2002 while the last born, Jacob, came in July 2004.

Your early years were happy. Until your father’s business started to go under. He sought refuge in alcohol. But the more he drank, the more downhill he went. He took it out on your mother; accusing her of having bewitched him. He even alleged that Mark, the first in the family, was the only legitimate son he had – and that the rest of you belonged to another man. Your mother being a devoted Catholic, sought refuge in prayers. He became increasingly violent. The beatings grew worse during the late nights, whenever he staggered back from his burkutu joints. He once beat her so badly that one of the discs in her spine shifted position. She has become an invalid in her 40s. She had been a seamstress in the early years; augmenting the family income. But even this she can no longer do.

In January last year, herdsmen attacked the local school, killing 20 children. Your sister, Benedicta, was one of them. Your mother was disconsolate. In the previous year, the king of the Adara, Maiwada Raphael Galadima, was kidnapped and later assassinated by herdsmen. When the traditional council protested his killing, they were rounded up and imprisoned without trial. No king has ever been appointed to replace him, unlike the haste with which the state government went into announcing the new Emir of Zazzau when the former one went the way of all flesh. The state government has set upon the systematic Islamisation of Adara land by allegedly carving out a new Emirate where none has ever existed.

The people have faced harrowing tragedy. Made worse for you by a father that was never there. You complained that he had never expended one single naira of his in your upbringing. You once sent me an SMS, saying:“I hate my father; I wish I never knew him in life”. I scolded you for those words. In July, at the peak of the COVID-19 lockdown, your father decided to sell the family house without letting your mother know; rendering you and your mother and brother homeless. The Reverend Father and the elders pleaded with him, to no avail. He is a hard man. I took it upon myself in my own small way to help you and to encourage you.

When school resumed in September, you called to say you were feeling excited about everything; having entered your final year at the School of Laboratory Technology, Vom, near Jos. You looked forward to finishing your course and finding a job so that you can help your mother and your brother. One Sunday evening, you called to announce that you were having a test the next day and that I should bless you. We prayed together. You were confident and happy. At about 9.00 am, the next day, just as you were about to go into the examination hall, the herdsmen arrived. You called me and you were hysterical. I could hear the gunshots. “Daddy, they are about to kill us”, you wailed. Then your phone went silent. Hours later, seven people lay dead while a dozen more were wounded. One of the victims was your classmate, Joseph Katung, with whom you were particularly close.

I did not realise that Joseph’s brutal death had affected you so deeply. It must have triggered the painful memories of your sister, Benedicta, who perished in similar circumstances. A few days after his demise, you asked me to pray for you. You complained that Joseph kept coming to you in a dream, pleading desperately that you should save him from his killers. All I could do was to ask you to pray. I did not know what else to do. I was having troubles of my own; a fugitive from potential assassins, on top of the nightmare of our son who has been attacked with an evil and painful disease.

Your friend was buried last month, amidst a flourish of tears. After the burial, I did not hear from you. I assumed, naively, that it had brought some form of closure; that the apparitions tormenting your winter nights were over. How wrong I was! I was only later to learn that you had broken down completely. They tell me you are having to be sedated and that you are more often in delirium than in consciousness. I have lit a candle for you.

My heart bleeds – for you – for the young flowers of our benighted country.

With all the affection and tears of my life.