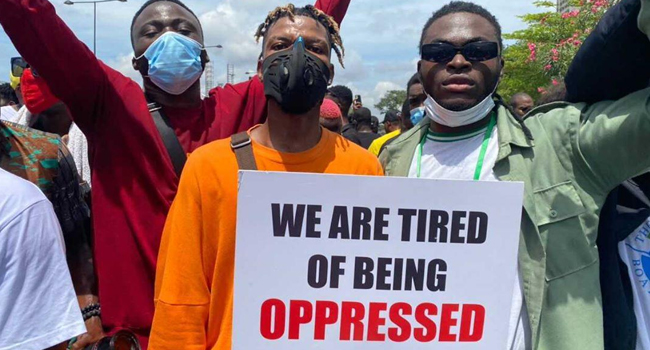 Young Nigerians have taken t the streets of Lagos to continue protesting for the federal government to scrap the Special Anti Robbery Squad (SARS).

The protest that started on Thursday has gathered momentum with more youths taking part in the Friday protests.

The protesters took off from the Lagos State House of Assembly at Alausa, Ikeja area of Lagos and proceeded to Allen roundabout and then back to the take-off point.

Led by popular comedian, Debo Adebayo aka Mr Macaroni, the protesters maintained that they are not asking for a reformation of the SARS outfit, but a complete scrap of that unit of the police.

Mr Macaroni, and a handful of other protesters, would later pass the night in front of the Lagos State House of Assembly, vowing to continue the protest Friday morning.

“This is a struggle for our lives ooo! Leaders like Falz, Runtown and other hardworking youths have set the ball rolling. Let us gather ourselves and keep the ball rolling. It could be me or you tomorrow!! #EndSars #AlutaContinua,” he tweeted.

Another entertainer, Temitope Adekunle, popularly known as Small Doctor, also gathered another round of protesters from Pen Cinema, Agege to join the protest.

The singer led the protesters from Agege to join the ongoing protest in Ikeja, further increasing the crowd.

Speaking to reporters at the protest, Small Doctor said he was attending the protest because it was important for him to be there with his people.

“This has gone on for so long. This oppression has been on for long and we cannot continue like that. So I am here, all of us are here because we at tired of just watching. We must see an end to SARS,” he said.