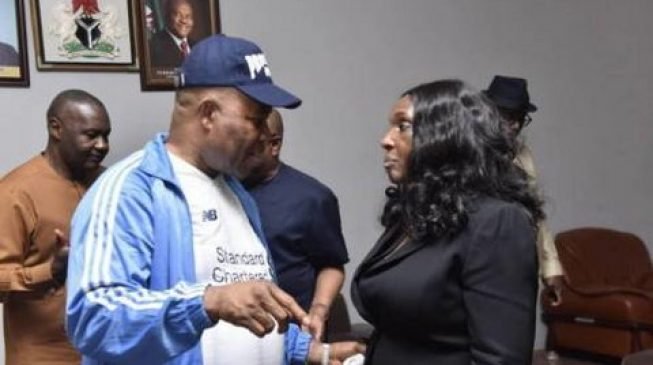 At first, I resisted the temptation to comment on the N80bn (US$206 million) embezzlement or “corruption” probe of the Niger Delta Development Commission and its ‘acting’ Managing Director, Prof Daniel Pondei, who theatrically ‘slumped’ during questioning in the hallowed chambers of the National Assembly last week. My initial reluctance to comment came from a certain sense of déjà vu about the whole charade. Forgive me for saying this, but corruption is an overused term in the Nigerian political lexicon.

What we are witnessing is not corruption per se; what we (and the rest of the world) are witnessing is a rare glimpse, a lifting of the veil, and a window into animal farm and their dinner table manners, the likes of which George Orwell would instantly recognise.  We were and are still being treated to the mucky world of national cake-sharing formula, and the ugly faces of the dinners at the table. To the uninitiated, it is “corruption”, “graft”, “stealing”, and all of those familiar epithets. But, to the animals, it is understood as ‘sharing of the national cake’. After all, says the Minister for Niger Delta Affairs, GodswillAkpabio, members of the National Assembly probing the “corruption” are themselves mired in corrupt acquisition of up to “60%” of the contracts under scrutiny. It is an audacious claim to which the Speaker of the House of Representatives, Femi Gbajabiamila, responded by giving Akpabio “24 to 48 hours” to substantiate. The minister has since quickly eaten his own words, and denied making the claim despite evidence to the contrary.

Last week, this column commented on the National Assembly’s propensity to order the arrest of people who fail to accede to their request (See, National Assembly: Weakest arm of government, The PUNCH, July 21, 2020). It would not be out of place for Gbajabiamila to come down harder on Akpabio in the coming weeks. But, we need not worry too much about the theatrics on both sides. They will soon fizzle out – as they do.

The main purpose of the write-up this week is to offer an unconventional analysis which shows why there is more to what is happening with the NDDC than meets the eye; why even an Angel of God in Pondei’s shoes would have also ‘fainted’ in like manner or worse. Yes, some hapless individuals find themselves in jail from time to time, for misappropriation of public funds. We hear about it often on television and read it in the print media. Now, has there ever been a reward for not misappropriating public funds in this country? I am keen to know one individual who has ever been garlanded for having kept clean hands in government. Such people die a quiet death; they are dead heroes. If you live in a society, and under a system where reward for honest living exists only in heaven, where then is the incentive not to misappropriate public funds? Furthermore, if you live in a country whose very existence and whose very legitimacy remain highly contested, where then is the incentive not to misappropriate its commonwealth?

Let us unpack these two hypotheses by looking at how corruption is tied to the political economy of the state in Africa. During the colonial struggle for independence across the continent, starting from the late 1930s, through to the late 1950s, the state was the Leviathan exerting itself over and suffocating the inhabitants of the territories under occupation. It was a totalitarian state, which afforded the colonised little room to breathe, let alone exercise individual freedoms. “No taxation without representation” was the revolutionary swansong of the independence struggle against the British in the United States of America in 1761. That was a rejection of the practice of paying taxes commandeered by the British Parliament in which they had no representatives.

The struggle for independence in Africa was a spillover from that earlier struggle in the US. In Africa, the state was seen as enemy Number One in the eyes of the nationalists. It was the only bond of understanding among the disparate ethnic nationalities co-habiting inside the colonial territories. The modestly educated as well as the highly educated nationalist leaders waged a prolonged campaign of civil disobedience to the state. Since the state was Enemy Number One, stealing from its coffers was not only welcomed by the population at large, it was seen as a patriotic duty on the elite. Government property was seen as nobody’s property. Asset-stripping the state was rationalised as restorative justice by the nationalists. Weekend retreats into villages and provinces were usually accompanied by distribution of largesse (loot if you like) to the clans. The Robin Hood syndrome had taken root and had become woven into the fabric of the state in Africa.

The colonial state fought back, often by throwing the nationalist leaders in jail for lengthy periods. It worked for the British as it slowed down the pace of the independence agitation in Nigeria a bit, but it backfired because it took away the novelty of elite imprisonment from the people’s consciousness. Political leaders going to jail was no longer a deterrent; it became a badge of honour in fact. You come out of prison, re-join the comrades, and resume the war of attrition against the state. The point here is that this colonial structure of reference has remained with us to this day. It is unspoken, and unproclaimed, but it permeates our inner thoughts and our leaders’ decision-making processes.

Today, a politician comes out of jail and is immediately welcomed back with a red carpet by ‘his people’. Remember Diepreye Alamieyeseigha, James Ibori, Cecilia Ibru etc? All convicted of larceny, and all quickly re-absorbed into their communities. As much as the late General Sani Abacha stole and almost bled this country to death, he still has monuments in his honour not only in his hometown of Kano, but more significantly in the nation’s capital, Abuja. Our people (not just the elite) still see and smell the ‘colonial state’ all around them in reference to public funds. It makes it easier to steal from it without batting an eyelid. When you then add the toxic mix of ethnic resentment and “state capture” by particular groups of elite, it affirms the sense of alienation people feel from the state apparatus, and a reluctance to protect its commonwealth.

The state in contemporary Africa has carried on by making its presence felt more or less in the same manner as the hated colonial state. Militarisation of civil life is all too glaring around us. Leadership hierarchy in many African politics is still largely dominated by people with ties to the security forces. The state is nominally independent, but it remains fragile, and continues to struggle for legitimacy. It resorts to keeping order by coercion most times. Legislature would resort to issuing threats of arrest against citizens in order to enforce compliance.

Unlike the state in Western democracies, there is, as yet, no commitment to its survival amongst the citizens in Africa. This is hardly surprising since the presence of the state is only ever felt when they are being coerced, and when they are being bludgeoned into submission to its authority. The building blocks of the welfare state (as in Europe and America) belongs in the realm of dreams for ordinary citizens in Africa. Consequently, when the occasional opportunity to cut a slice of the cake falls into our lapse, educated or not, illiterate or not, we nurse no compunction, we waste no time in taking our own share.

By the way, the other day, it was reported that the North-East Development Commission had apparently fritted away a whopping N100bn (US$258m) in one year alone, as well. Blame them not; it’s their turn to eat.