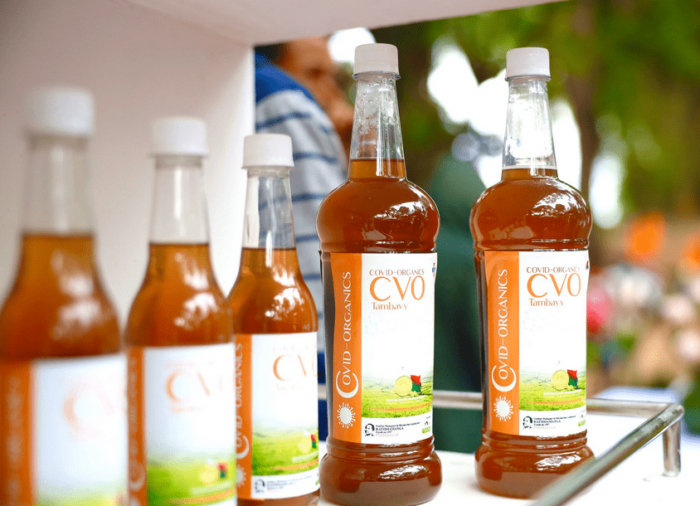 The launch of Covid-Organics (CVO) in Madagascar has raised many questions. But for Marcel Razanamparany, president of the Academy of Medicine, this initiative highlights the work of IMRA researchers, who conducted the clinical study. And whose founder, Albert Rakoto Ratsimamanga, has always advocated the connection between modern and traditional medicine.

In the race against time to find a cure for COVID-19, Madagascar began very early on a dual therapy protocol based on chloroquine and the antibiotic azithromycin, in association with treatments derived from traditional knowledge that emphasises the use of medicinal plants.

With Madagascar’s rich biodiversity and the central role of its traditional practitioners, the decision was made to promote traditional medicine.

Under presidential demands, and faced with the promises of chloroquine and the use of artemisia in China against the coronavirus, the Malagasy Institute of Applied Research (IMRA) and the National Pharmacology Research Centre joined forces to conduct studies and set up a research protocol on this plant already known for its virtues against malaria.

This led to the development of Covid-Organics, an improved traditional remedy made up of artemisia and other endemic medicinal plants, such as ravintsara.

Association of Traditional and Modern Medicine

Abundant on Malagasy soil, the artemisia annua has already been the subject of more than twenty studies in Madagascar where it was introduced in 1975 by Professor Albert Rakoto Ratsimamanga to fight against malaria.

Its medicinal form is already marketed in pharmacies.

The research protocol enabled the IMRA team, which has been working on this plant for a long time, to verify its good results in reducing and eliminating coronavirus symptoms.

This is yet another discovery for this research centre, which has some fifty remedies to its credit, developed by combining traditional and modern medicine, including the antidiabetic drug Madeglucyl and the cough supressant Madetoxin.

This medical and pharmaceutical research and training centre was founded in 1957 thanks to the financial benefits of a healing drug, Madecassol, which its founders Albert and Suzanne Rakoto Ratsimamanga derived from the centella asiatica plant. The centre is nationally and internationally renowned and has been granted the status of regional research centre by the African Union.

Located in Antananarivo, composed of a team of about a hundred people, including some thirty researchers and technicians, its research focuses on phytochemistry, parasitic and cellular pharmacology, experimental diabetology, pharmacodynamics, toxicology and the analytical chemistry of essential oils. It was recognized as being of public utility by the Government Council on 2 October 2012.

Potential of the endemic flora

The development of Covid-Organics is a perfect illustration of the credo of Professor Albert Rakoto Ratsimamanga, whose research focused on the combination of traditional and modern medicine.

Regarded as the pioneer of science in Madagascar, this researcher – who was at the origin of some 350 scientific studies – declared: “We must move forward at our own pace, we must above all have confidence in ourselves and in the therapeutic virtues of nature. For nature and man are one.”

Aware of the exceptional nature of the indigenous flora, of which he knew better than anyone else its potential benefits and traditional medicine cures, he also knew its limits, especially when faced with the risk of infection. The better part of his life was filled with great challenges and scientists of the time.

Contribution to the scientific world

Initially a doctor at the Assistance Médicale Indigène (Indiginous Medical Assistance, created by colonial France at the time), this anti-colonialist activist, aware of the immense health precariousness of Madagascar’s rural populations, continued his studies in Paris where he became a doctor of medicine and also completed a degree from the Institute of Exotic Medicine and the Pasteur Institute.

After working as an assistant at the Paris Faculty of Medicine, he was one of the four founding scientific directors of the post-war Centre national de la recherche scientifique (the National Centre for Scientific Research, CNRS).

Having decided to focus his research on the medicinal properties of the Malagasy flora, he was also the first to consider how to integrate it into molecular medicine.