Home Columnist Trump blames WHO for getting coronavirus wrong 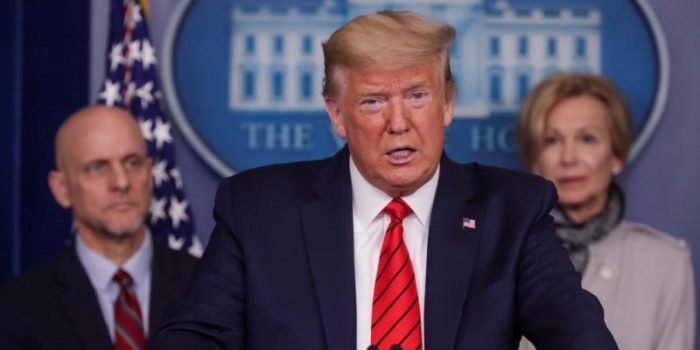 President Donald Trump blamed the World Health Organization for getting “every aspect” of the coronavirus pandemic wrong and threatened to withhold funding from the international organization.

“They did give us some pretty bad play calling … with regard to us, they’re taking a lot of heat because they didn’t want the borders closed, they called it wrong. They really called, I would say, every aspect of it wrong,” Trump said at a White House press conference Tuesday.

The WHO, the United Nations’ health agency, started sounding the alarm on the outbreak of a new coronavirus in Wuhan, China in mid-January, designating the COVID-19 pandemic as a global health emergency on Jan. 30 when there were just 8,200 cases in 18 countries across the world. The coronavirus has since wreaked havoc across the globe, spreading to more than 1.4 million people and killing more than 81,000, according to data compiled by Johns Hopkins University.

The WHO’s global emergency declaration on Jan. 30 was nearly a month before Trump tweeted that “The Coronavirus is very much under control in the USA” and six weeks before he declared a national emergency on March 13.

Two days earlier, on March 11, WHO officials declared the outbreak a pandemic, when there were just 121,000 global cases. In the U.S. alone, there are now more than 390,000 cases as of Wednesday morning, according to Hopkins.

“Take a look, go through step by step. They said there’s no big deal, there’s no big problem. There’s no nothing, and then ultimately when I closed it down, they said I made a mistake in closing it down and it turned out to be right,” Trump said, referring to travel restrictions he put in place on people flying to the U.S. from China on Jan. 31. That day, Health and Human Services Secretary Alex Azar declared it was a public health emergency in the U.S.

While WHO officials have praised the U.S. response to the coronavirus, they’ve also been critical of some of Trump’s policies and practices surrounding it. They’ve urged people against calling COVID-19 the “Chinese virus” as Trump has done, saying that it could unintentionally lead to racial profiling.