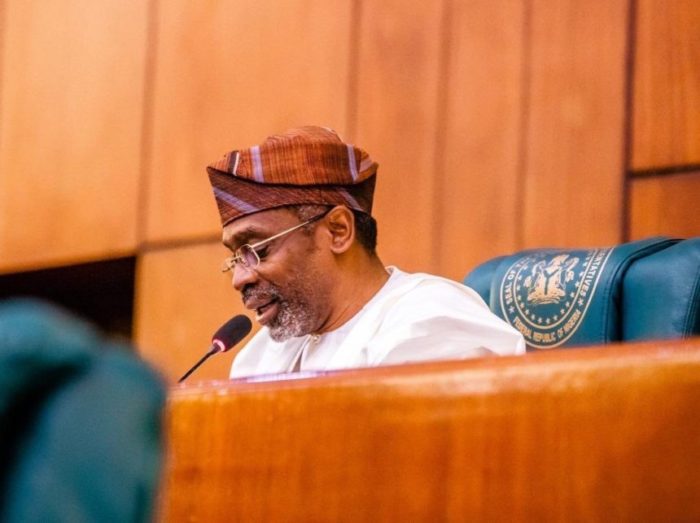 Speaker of the House of Representatives, Femi Gbajabiamila, lately responded to the critics who have rightfully described the 9th assembly as mere a rubber stamp of the executive arm of the government. Gbajabiamila launched into his self-justification at an event in Lagos reported as, “Gbaja 2019 End of the Year Grassroots Empowerment Programme.” According to Gbajabiamila, he would rather be a rubber stamp National Assembly for the sake of the country’s progress rather than “fight” the executive without progress. Gbajabiamila’s rhetorical strategy is disingenuous. He brought up an argument that nobody made so he could discount legitimate criticism.

First, nobody asked him to go to the National Assembly to duel with the executive. He is merely cooking up things to justify the passivity of the legislature at a period in the nation’s history when they should be putting the feet of the executive to the fire. Many issues are ongoing in Nigeria that one would expect would have attracted the attention of the legislature, and some of which should at least have resulted in congressional hearings. But no, nobody hears “pim” from them. One such issue was the illegal detention of the journalist, Omoyele Sowore, who was only recently released after the Nigerian government had been duly shamed locally and internationally.

In the course of Sowore’s detention, people appealed to different powers-that-be, locally and internationally, to secure his release. It should bother the present crop of lawmakers that nobody thought of them as enough authority, constitutional or moral, to solicit their intervention. People did not look in their direction because they already act like mere vassals of the executive and could not afford to take a stand. While they could not be counted on to stand up for Nigeria’s democracy when we needed them, six USA lawmakers committed themselves to the noble cause. Despite the initial “gragra” of the presidency’s errand boys like Femi Adesina, these Americans managed to rattle Aso Rock’s dictator to the point they were forced to obey the constitution they were sworn to obey. Where was the National Assembly during the whole episode?

If anyone has challenged Gbajabiamila on his relationship with the executive, what they are telling him is to do his job and that does not include fighting anyone. They are challenging him to ensure necessary oversight so that the preponderance of power available to the executive arm of government is not abused. He is a lawyer and he should know better than make an argument like someone who never attended a civics class. His critics are reminding him that the legislature has the duty of checks and balances, and he and his fellow lawmakers owe it to us not to turn themselves into obedientiaries for the President, Major General Muhammadu Buhari (retd.)’s self-serving purposes. If all Gbajabiamila wants to do as Speaker is to agree with the executive so both parties can both claim some faux progress, then he might as well do us a favour and move the motion for the dismissal of the National Assembly. The times are already hard for the country; getting rid of the National Assembly will save us good money. Think of the happy world where we do not have to invest a whopping N37bn on renovating the National Assembly building or paying the fat cats who sit inside it.

Second, the criticism of the National Assembly is valid when viewed against the background of the shenanigans and politicking that brought both Gbajabiamila and the Senate president, Ahmed Lawan, to their offices. For the executive to have gone as far as they did to ensure their emergence as Speaker and Senate President respectively suggests they were handpicked on purpose. In the do-me-I-do-you nature of politics, Nigerians have a right to worry that these people will merely fulfil the bidding of the executive. If the lawmakers want to reassure us of their autonomy, they will have to do better than puerile denials.

For instance, in July, Lawan dismissed the insinuation that he runs a rubber stamp chamber as “sentimental and laughable.” He said he had a convivial relationship with the President, but that would not hinder him from doing his job. Last month, when Lawan hosted the Chairman, Presidential Advisory Committee Against Corruption, Itse Sagay, he was quoted as saying, “I want to assure you that any request that comes from Mr. President is a request that will make Nigeria a better place in terms of appointments or legislation. When such (a) request comes, the Senate will act expeditiously to ensure that we play our part in the confirmation or passing of legislation appropriately.” When the Senate president says that “any request” from the presidency does not deserve any critical examination, and that all he and his colleagues exist to do is to “confirm or pass” such legislation, people are right to be worried at their stances. Lately, the presidency approved a humongous sum for the National Assembly complex renovation and is now in the process of asking those lawmakers to approve a $30bn loan for their administration’s use. This rather transactional relationship between both parties gets doubly terrifying when you factor in the Speaker’s construal of his job of head-nodding to the requests of the executive as “progress.”

Third, and this last point is why I described Gbajabiamila as a manipulator. He reportedly made the statement about “fighting the executive” at a so-called empowerment programme for his constituents. In Nigeria, when a politician says they are embarking on an “empowerment” agenda, it is a euphemism for describing the generosity of a leader who has impoverished his people and has now decided to hand them some tokens. True empowerment in a polity is not about giving a few items to people and sending them on their way but taking the more challenging route of building structures and making policies that will enable their enterprises to thrive. The beneficiaries of the paternalism of these “empowerment” projects hardly ever climb out of their poverty because the politicians’ tokenism merely treats some of the symptoms of their problems.

So, Gbajabiamila gathered his constituents to, according to media reports, hand out “between N100,000 and N200,00 grant each to 500 business owners as well as 30 photocopiers and 309 home solar systems to other beneficiaries.” Let us, for the moment, resist the temptation to ask the Speaker where he got so much money that he was distributing to people and focus on the manipulative tactics of this politician. Gbajabiamila stood before the people who were waiting to collect cheques from him and asked them if “fighting the executive” was what they elected him to do. Apart from the fact that he was asking the wrong question, he was also doing so within a somewhat manipulative context. What kind of answer was he expecting from people who had come to collect money or some other items other than their acquiescence? If anyone had dared challenge him, would they still have gone home with the money or items he was going to give them?

Gbajabiamila was further quoted as saying to his constituents that, “Rather, you asked me to engage and collaborate with other stakeholders to deliver democratic dividends, part of which we are having today.” See? He not only pulverised a valid criticism of the role he has been playing since he was sworn in as the Speaker, he also supplied answers that put words in the mouth of his already muted constituents. He not only told them what they were supposed to think his job in Abuja was, he also reduced the multitude of democratic gains due to them as Nigerian citizens into the few items of charity he was gratuitously throwing in their direction. For some of those people, the money he would give them at the end of the programme might just be all the hope they have in the world. They were not going to jeopardise it by challenging him on how he wanted to define his legislative role. Even if they see through his cynical manipulation, how “empowered” are they to call him out?