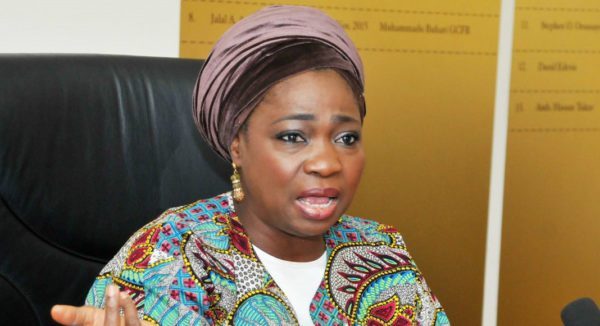 Chairman/CEO of Nigerians in Diaspora Commission, Mrs. Abike Dabiri-Erewa, has urged home-based Nigerians indicted by the Federal Bureau of Investigation to voluntarily turn themselves in.

She warned that if the suspects refuse to do so, the Federal Government might have no option than to repatriate them to the United States to face the charges preferred against them.

The FBI list contains 78 names of America- and Nigeria-based ‘Yahoo Boys’ whose online scam were monitored between 2014 and 2018.

Those of them living in the United States were rounded up in a sting operation by the FBI on Thursday, and the charge sheet of their crimes declassified.

Dabiri urged the Federal Government to repatriate those of them that are home-based if they refuse to voluntarily turn themselves in.
In a statement obtained by the News agency of Nigeria on Friday, the NIDCOM chairman said the actions of “a few Nigerians involved in criminal activities do not reflect the disposition of the majority of the citizens.”

The announcement made by Nick Hanna, the U.S. attorney, who alleged that the suspects connived with state and federal agencies to carry out their acts.

“A 252-count federal grand jury indictment unsealed today charges 80 defendants, most of whom are Nigerian nationals, with participating in a massive conspiracy to steal millions of dollars through a variety of fraud schemes and launder the funds through a Los Angeles-based money laundering network,” the department of justice of the Central District of California said in a statement on its website.

Following this development, Dabiri-Erewa has urged the Nigerians charged with fraud in the U.S. to turn themselves in to the U.S. authorities.

She expressed the commission’s deep concerns about the news of the indictment.

She said that prior to the court indictment of the 80 suspects of which one Valentine Iro and one Chukwudi Igbokwe were lead suspects, one Obinwanne Okeke, aka Invictus Obi, had earlier been arrested in Virginia.

“We acknowledge the fact that accusation does not mean guilt, and we hope that all the accused will be given fair and speedy trial.

“We also ask those accused in Nigeria to voluntarily turn themselves in to American authorities to clear their names without which the Nigerian government should extradite them if relevant international treaties between the two governments are invoked,” she said.

“We advise and continuously resist any stereotype of Nigerians generally.
“The commission will continue to monitor the case closely,” Dabiri-Erewa added.