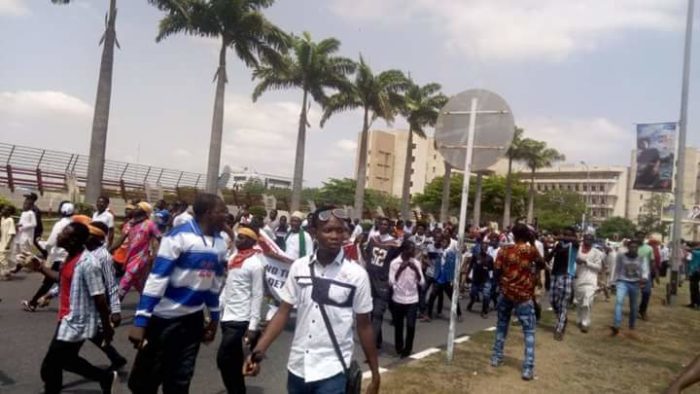 Thousands of members of the Islamic Movement of Nigeria, also known as Shiites, on Tuesday, stormed the National Assembly to protest against the “unlawful” detention of their leader Sheik El-Zakzakky.

The protest became violent when members of the Nigerian Police Force and Nigerian Security and Civil Defence Corp tried to prevent the protesters from gaining access to the National Assembly complex. It was reported that some of the Shiite protesters shot a police officer and a civil defence officer.

The gates to the National Assembly have been shut.

Business Hallmark gathered that the Shiite members overpowered the policemen at the gate, collected one of their guns and shot the two security operatives.

They entered the main entrance popularly known as MOPOL gate and vandalised the gatehouse.

They also burnt three vehicles and destroyed many others.

The sect members unleashed terror on other security operatives when tear-gas canisters were fired to disperse them.

The gates to all the National Assembly premises have been closed as staff and other accredited persons ran for dear lives.

Visitors to the federal parliament were barred from entering the premises as of the time of filing this report.