Home Columnist From New Zealand with love – By Yakubu Mohammed 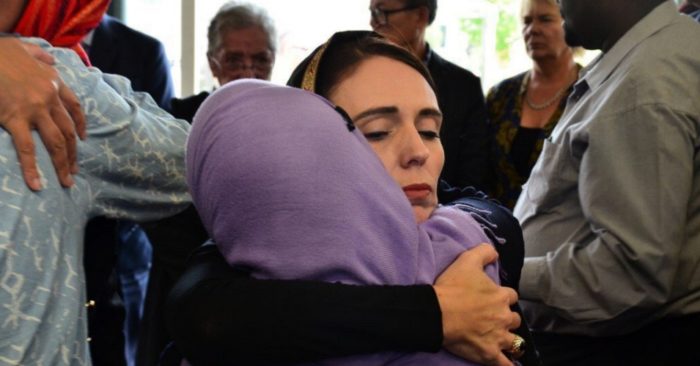 On the face of it, this may sound preposterous. Yes it would seem to be paradoxical for love to emanate from this picturesque five-million-people-island country of New Zealand where, on Friday March 19, a white supremacist by name Brenton Harrison Tarrant shot ruthlessly into a mosque in Christchurch town and killed 50 Muslim worshipers.  Simply put, that true love could emanate from what looked like the den of the devil would have been a contradiction in terms.

But, I ask, what appropriate name do you give to the lesson which the good citizens of New Zealand, irrespective of their religious affiliations, had taught the rest of the wide world during that horrific shooting? It is, in my well-considered opinion the best practical lesson in humanity, fellow-feeling and empathy, better than any lesson any pastor from another world would teach his congregation from the pulpit or any sermon by any Imam in the kind of fractious and hate-filled society in which we live today.  The undiluted and unpretentious love, not to mention the spontaneous sympathy, the grief stricken New Zealanders showed on that black Friday, in any other place, is a rare commodity.

No matter how quickly we may wish to forget the deadliest mass killing in New Zealand since 1943 – 50 Muslims murdered in the mosques within 35 minutes of madness – we cannot forget so fast the spontaneous outpouring of love and sympathy by a people who had become genuinely used to living happily with one another irrespective of political and religious differences.

At the head of the country of mourners and care givers was the indefatigable young and pleasant looking prime minister, Jacinda Kate Arden.  The young prime minister didn’t have any illusion and, unlike many other leaders given to dithering and blundering in the face of crisis, she wasted no time and minced no words in identifying the tragedy for what it was – she labelled the murderous carnage an act of terrorism and she vowed to change the country’s gun laws. She did so a few days later.

Though majority of the victims were immigrants – some came from Pakistan, Saudi Arabia, Turkey, Indonesia, Bangladesh and Malaysia with one Nigerian as an acting Imam in one of the mosques that was attacked in Christchurch city, Prime Minister Arden made no distinction between the Kiwi, an indigenous New Zealander and an immigrant from Nigeria. She proclaimed famously: “They are us. The person who perpetuated this violence against us is not. And they have no place in New Zealand.”

The rest of the country took a cue from their leader. The attack and the mass killing had served as glue that united the country firmly in grief but with the grim determination to ensure nothing like that ever happens again. They contributed a princely sum of nine million dollars for families of the victims while government took care of the funeral expenses and the cost of treatment for the injured.

As a measure of solidarity for the Muslim community, a large number of sympathisers brought flowers to the mosques and formed a human shield for Muslims as they gathered to say their prayers. Kiwi people joined the police to patrol mosques and the communities with prevalent population of immigrants. If the action of the attackers was designed to show their distaste for Islam and its adherents, they missed the mark for the government encouraged the Azan to be played publicly on national television and radio station throughout the country the Friday following the mass killing to prove that the country did not share in the wave of Islamophopia in parts of the Western world. 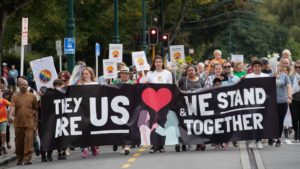 And if the attacker was in search of notoriety, the prime minister said emphatic no to that. She said the attacker might have a “range of reasons for committing this atrocious terrorist attack. Lifting his profile was one of them. And that’s something that we can absolutely deny him. He may have sought notoriety, but we in New Zealand will give him nothing, not even his name.”

In tow, Kiwi people opened their homes to provide free shelter and food to any Muslim that might be in need of immediate comfort while the Prime Minister, serving as the chief mourner, wore the Muslim women’s hijab as she visited almost all the homes of the families of the dead in an unprecedented display of empathy that has become a rare commodity even in countries that proclaim their practice of Islam from the top of the minarets.

Prime Minister Jacinda told the grieving relations of the dead: “We cannot know your grief, but we can walk with you at every stage, we can. And we will surround you with aroha, mamaakitanga and all that make us, us. Our hearts are heavy but our spirit is strong.”

World leaders responded appropriately. They rallied round New Zealand in its hours of darkness and deep grief. From Saudi Arabia through the Arab World to the western world, the world was united against the Christchurch mosque attack and pledged to fight terrorism to a standstill. The Pope condemned it and the Queen felt scandalised by the senseless killing. And so was the United Nations.

But to my utter consternation, mute was the word from Black Africa. I couldn’t put a finger on a single African country that felt horrified and scandalised enough to shout loudly against the killings of innocent worshippers in New Zealand.

Or is it that the African countries, Nigeria being one of them, are preoccupied with how to bring an end to their own home-grown terrorists that have caused more havoc than the New Zealand massacre? In my own dear country, no doubt, we have witnessed unconscionable massacre of innocent people across the country as a result of ethnic and religious bigotry. The figures of the dead are mind boggling.  No matter whatever spin doctors in the service of anti-God movements may say, many Christians as many Muslims have suffered the same fate in the hands of the terrorists who, in a scorched earth fashion, are determined to set the country ablaze.

Yes, there is no doubting the fact that the Boko Haram insurgents initially went after churches in the North to give the impression that it was the Muslims who were attacking the Christians to spread Islam across the country in the mistaken belief that such atrocities would lead to the Islamisation of the country. They provided the potent weapons of hate for those who lived in the grand illusion that jihad movement was afoot.

But all doubts cleared when the same Boko Haram fighters showed their true colours and began the massacre of Muslims in the mosques, horrendous killings that are akin to the New Zealand mass murder. Muslims were either gunned down in cold blood or they were bombed to pieces by suicide bombers as they came out of the mosques.

It is pointless to compare the number of those who died as Christians carrying the cross or as Muslims waving the crescent flag.  No sane person will glorify in death of any human being. Certainly no life is inferior to another life, and none more superior. Terrorism is our national headache. And terrorism is what we are dealing with. We must be honest enough to admit that this ugly phenomenon has no religion and it has no ethnicity. Above all it has no humanity.

Humanity. That seems to be the missing link between us today and the civilised world. We have lost our humanity. Other countries like New Zealand are fighting to retain their own. And New Zealanders are lucky to have a pretty, vivacious and humanity-exuding Jacinder Arden as their leader. Vogue magazine describes Arden, the world’s youngest prime minister at 37 as forward –looking and unabashedly liberal – call her Anti-Trump.  And I call her the people’s leader with a human face.